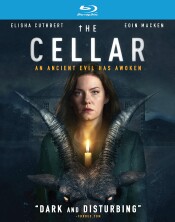 “It’s simply his way of illustrating the misrepresentation of having quantum particles existing in two states. The cat in the box is either dead or alive. But we can’t tell until we open the box to observe it, so until we do so, the cat is both dead and alive.”

I’ve seen a lot of horror and thrillers in my time. This is my first one with mathematics at the heart of it. I applauded the film for introducing me to something new. However, the moments of intrigue are surrounded by periods where the plot seems to drag on. Also, I’m not sure that the characters’ reactions to particular events are sensible. For example, my daughter suddenly goes missing, and I suspect that her disappearance is somehow the result of my newly acquired residence. No matter how irrational that idea may be, the first thing I would do is get me and the rest of my family a hotel. In the case of The Cellar, the Woods family just keeps on living there. Now this could be partially forgiven, as the mother, played by Elisha Cuthbert, is determined to find her daughter. But once I get a distinct impression that my family is not the only presence in the house, I’d be conducting my investigation from a safe distance.

Let this be lesson to you; never buy a house sight unseen. And another thing: if it sounds too good to be true, like being priced below market value and coming furnished, there is something else living in that house alongside you. And that something is not paying rent. Sadly, the Woods family had to find that out firsthand, as their daughter Ellie goes missing on their very first night in the house. As expected, the family involves local law enforcement and begins to search for their daughter. However, after a couple of days and given Ellie’s reputation as a bit of a misfit and her unhappiness about the recent move, the police are prepared to categorize her as a runaway. Her mother, Keira (Cuthbert), is unable to accept this idea, especially given her last phone call with Ellie right before she went missing. To mother’s recollection, she didn’t sound like herself, and she mentioned something about the cellar.

Investigating further, Keira learns more about the previous owners and the multiple disappearances connected to the house. Even more curious are the mathematical symbols that are scribed all over the house, and the mysterious equation etched on the floor in the cellar. As Keira attempts to unravel the mystery of her daughter’s disappearance, the answer she finds indicates the serious danger her daughter is in, as well as the danger to herself and the remainder of her family.

As previously mentioned, there some periods of real intrigue in the film. The academia aspects, which I initially thought that I would find boring, were actually very easy follow and provide great context to the overall story. For example, the film has one of the best incorporations of the principle of Schrodinger’s Cat, as listed above. The explanation of the principle acts as a perfect analogy to the status of Keira’s daughter. Until Keira finds her and assesses her, she is both safe and in danger. This was the best example of this principle that I’ve seen since the Big Bang Theory. Another good moment of context comes when Keira meets with the house’s previous owner, and she explains her father using mathematics to seek answers and bring something unnatural into the world. I have no issue believing that mathematical equations are the key to unlocking dimension, and who am I to say what resides on the side of those doors. However, in the case of this film, the big bad is not as scary as initially built up. In truth, it is a lot of smoke and mirrors as far as the presence is concern. That is not to say that the being doesn’t hold any sway; its ability to influence the house occupants is impressive. But the danger aspect just ended up feeling lackluster. I was anticipating a more action-packed final confrontation, which I did not get.

In summation, there are some parts of The Cellar that are very interesting and worth seeing, but getting to those parts at times are a long trek. If you can stomach that knowledge up front, I suggest giving the film a chance. I initially went in thinking that it would be cheesy, and I actually was treated to a unique experience.

Jeremy Butler is a film school graduate of the International Academy of Design and Technology. He is been writing for Upcomingdiscs since 2012; however, movies have played a big part of his life for much longer. Favorite genres include horror, science fiction/fantasy, and comedy. Favorite movies are V for Vendetta, Boondocks Saints, Kiss Kiss Bang Bang, and The Godfather.
Agent Game The Black Phone