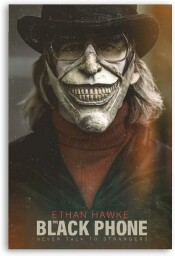 Joe Hill has done a good job of establishing himself as a horror writer, and when you consider his dad, Stephen King, has been the “master” of horror fiction for over four decades, you’d have to imagine the expectations on Hill are pretty high. I’m a fan of Hill’s work, and I’ve enjoyed seeing his work translate to the big screen and television (though I’m still hoping one day we’ll finally get an adaption of his book Heart Shaped Box).  I’ll admit my expectations for The Black Phone were a bit high, and to be fair, can you blame me? The Black Phone would be a return to horror after director Scott Derrickson’s work on the first Doctor Strange film and a reunion with actor Ethan Hawke and screenwriter C. Robert Cargill from the great 2012 film Sinister.  I don’t think enough praise is given to the film Sinister. It’s a film that just gets better with time and has a high rewatch value. Personally I feel it’s the masterpiece in Derrickson’s filmography. The Black Phone has all the ingredients to be another modern classic, but it pains me to say it just doesn’t quiet deliver despite how much promise this film had.

It’s 1978 in north Denver when the film kicks off, and the town is already under attack by “The Grabber” (Ethan Hawke). Parents and kids are terrified as kids have gone missing without a trace, and a bit of an urban myth has spread that if you talk about “The Grabber” that there is a good chance that you’ll be next. Finney (Mason Thames) and his sister Gwen (Madeleine McGraw) are dealing with a lot. Finney is dealing with bullies, while Gwen is tormented by dreams that may or may not be a psychic connection to the kidnappings. What’s more troubling for the brother and sister is their alcoholic father, who seems to have a hair trigger with his temper that results in punishing the kids with his belt. Jeremy Davies delivers a great performance in the first half of the film as the dad, so much so that the film didn’t need to even have the character of “The Grabber”. The tension on screen when the kids have to be careful with everything they say or do is anxiety-inducing enough, and some of these scenes are sure to get under the skin of some audience members. Finney and Gwen are characters we are rooting for. Their relationship is what works best in this film, and it is why when Finney is taken by “The Grabber”, the film loses some of its appeal.

When Finney wakes up, he finds himself in a sound-proofed basement with a dirty mattress, a toilet, and a strange black phone hanging on the wall. When Finney sees his captor, he realizes just how bad a situation he’s in. “The Grabber” has a creepy-looking mask to conceal his identity. The mask definitely works in Hawkes’ favor to deliver a creepy performance where his body and mannerisms are the crutch of the performance. Kudos for what Hawke pulls off with this performance. While I won’t go so far as to say award-winning, this is one that I believe horror fans are going to embrace for years to come.

Then the phone rings. A phone that supposedly is not supposed to work but will sporadically ring, but when Finney answers, he finds himself in contact with the spirits of the previous victims of “The Grabber”, and they dispense advice to help Finney escape and hopefully survive this ordeal. In most films the paranormal element would be the antagonist and creepier aspect of the film, but here not so much, which is why in some shots where we see the young ghostly images they feel out of place, like if they are trying to help Finney, why are they showing themselves in the creepiest way imaginable? Another question that irked me after the fact: if the spirits can do things physically, why not work together and attack “The Grabber”; why make it all Finney’s responsibility?

For Finney, he’s simply replaced the monster at home, his father, with a new monster in the kidnapper “The Grabber”. It’s no wonder why he’s not so easy to break down emotionally. Back home, Gwen is doing what she can to dream and hopefully find clues to save her brother. This is also where the film loses me, because suddenly now that his son has been kidnapped, Terrance is no longer the abusive alcoholic, but he somewhat plays the victim card to excuse his violent behavior. No, this doesn’t fly well with me, and if anything, it takes away from the impact of the first half of the film. Then there is the other major issue of “The Grabber”: we don’t get anything that suggests motive or anything about the man behind the mask and what he’s like beyond the basement. Sure, I understand the not knowing is part of the mystery and what is supposed to make him creepy, but in this situation it comes off as lazy storytelling. There are so many opportunities to give us depth with this character, but it is unfortunately neglected. And as we get to know more about the victims, it only raises more questions.

The Black Phone is a good film, but it could have been great. The performances from the cast are what make this film work, and in a year with some solid horror entries already and plenty more to look forward to this year, I feel this one is going to get lost in the crowd. On the bright side, horror in the summertime is always a welcome reprieve from the typical blockbuster fare that comes out this time of year. It’s worth checking out and having a good time while soaking in some AC, but it’s not the memorable thrill ride it could have been.

Brent Lorentson is a horror writer and film critic based out of Tampa, Florida. With a BA in Digital Film, he co-wrote and co-directed Scavenger Hunt. His short stories have appeared in various horror anthologies. In 2019 his short script Fertile Blood will be a part of the anthology horror film Slumber Party. He is currently working on his first novel A Dark and Secret Place set to be released in late 2019. Favorite Films: Taxi Driver, Fight Club, I Saw the Devil, The Wild Bunch, Dawn of the Dead, A Clockwork Orange, Pulp Fiction, Heathers, The Monster Squad, and High Fidelity.
The Cellar (Blu-ray) Curb Your Enthusiasm: The Complete Eleventh Season