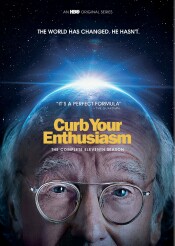 I have to admit my knowledge of the show Curb Your Enthusiasm is casual at best. I’ve seen a few episodes over the years, but not enough to call myself a fan. So to have Season 11 handed off to me to review was a bit daunting, but as a long-time fan of Seinfeld and having at least seen Larry David in the Woody Allen film Whatever Works, I figured I had a good enough idea of what I was in store for. Thankfully the show isn’t something like Game of Thrones or Breaking Bad, and I could simply start the season and not feel lost. The season starts off with Larry David waking up after hearing a noise in the house. When he goes to investigate, he eventually finds a body floating in his pool. It was an attempted robbery gone bad, and as it turns out there is a law in Larry’s district that states there needs to be a fence around the pool. This basically is the catalyst for the whole season, and things just get worse for Larry and him not having this fence.

Larry is also busy with getting a new show started up with Netflix, and then when things fall through, Hulu comes in to pick up the series. Larry is being extorted into casting Maria Sofia (Keyla Monterroso Mejia), the niece of the man who drowned in Larry’s pool. The hoops Larry has to go through to get the girl on the show are pretty funny as is, but then when everyone sees just how bad of an actress Maria is it makes things even better.

It’s nice seeing a show like this that is willing to take chances considering how everything we see on TV seems to be so sensitive about offending people. The show very much tackles these circumstances and does so in a way that points out the absurdity of it all while at the same time pleasing the “woke” audience. This is done best with how the show tackles racism, sexism, and many other “isms” along the way. The show is very self-deprecating, and it makes jokes at everyone’s expense. I feel like those watching should already be used to the humor by now, but just in case, they make sure no one is safe. An episode where Larry offers to have a Ku Klux Klan member’s robe cleaned after spilling coffee on it is definitely is one of the most absurd episodes, but it has some pretty great laughs throughout.

Larry’s roommate, Leon (JB Smoove) has his own dilemma this season as he’s trying to find a Mary Ferguson to take with him on his trip to Asia, and things just get more difficult for him with each Mary he comes across. I like the chemistry between Larry and Leon. It’s an odd couple that works really well, from Leon’s comments about Larry’s dating life to Larry getting Leon to become comfortable with eating watermelon, and then there is the brief business venture of House Husband that really keeps things fun over the course of the season.

Then we have Jeff Greene (Jeff Garlin) and Freddy (Vince Vaughn), who play Larry’s close friends. The chemistry between Larry David and Jeff Garlin is pretty incredible; the ease with which the two play off one another is great. Even when there isn’t dialog, the pair just work greatThen there is Vince Vaughn, whom I’ve been a fan of for years, and one of the gifts I feel that he has is his ability to make anyone he’s in a scene with shine bright. I’ve felt this since I first saw him in Swingers and how he made Jon Favreau look good and continues to do it when he’s on screen with Larry David.

This brings me to Tracey Ullman, who is a complete scene stealer as Irma Kostroski, who is a city councilwoman who Larry is attempting to seduce to help get the law about the fencing required around a pool repealed. I love how over-the-top Ullman can be, and what she does with her character is a lot of fun. Only Tracey Ullman can make such a repulsive character so likeable.

This was a fun season and an easy one to binge; I had enough fun with it that I’m going to check out some of the older seasons on HBO/Max. Again, I have no real point of reference with how this ranks against other seasons, but what I feel works in its favor is that I could easily pick this up at Season 11 and not feel lost. I was impressed enough that I want to keep on watching, which isn’t always the case after reviewing a season of a TV show. I’m impressed that after all these years Larry David hasn’t missed a beat in the comedy department, and I feel he can keep on going if that’s what he wants. He’s a fun curmudgeon to watch, and he’s one I can relate to a bit too well.

Brent Lorentson is a horror writer and film critic based out of Tampa, Florida. With a BA in Digital Film, he co-wrote and co-directed Scavenger Hunt. His short stories have appeared in various horror anthologies. In 2019 his short script Fertile Blood will be a part of the anthology horror film Slumber Party. He is currently working on his first novel A Dark and Secret Place set to be released in late 2019. Favorite Films: Taxi Driver, Fight Club, I Saw the Devil, The Wild Bunch, Dawn of the Dead, A Clockwork Orange, Pulp Fiction, Heathers, The Monster Squad, and High Fidelity.
The Black Phone Exclusive Interview With Sam Nelson About The Adventures of Ozzie and Harriet Restoration & Release From MPI