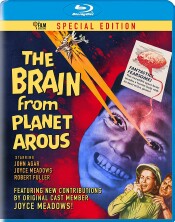 Steve March, played by John Agar, is a radiation expert who lives and does research out in the desert. His instruments detect a strange source of gamma rays in an isolated area of the desert. It’s a good bet they aren’t coming from Dr. Banner, so March decides to investigate, and it turns out you wouldn’t like him when he’s angry. Along for the ride is red shirt … I mean lab assistant Dan Murphy, played by Robert Fuller. They discover a brand new cave, and as they follow the radiation scent, they encounter a giant floating brain with eyes. Murphy ends up dead, and March ends up possessed by the giant floating brain, who calls himself Vol from the planet Arous. The name is an obvious riff on Eros, and we soon get the connection when March returns to his fiancée, who finds his passion a little hotter than when he left. In fact, the brain begins to revel in his newfound appetite for Earth women. But that’s just a distraction from why he’s really controlling March. As a renowned radiation expert, March has access to government weapons facilities, and it’s there that Vol attempts to take over the world. He shoots eyebeams that can take out a model airplane in flight and destroy an entire military base.

Fortunately March’s fiancée Sally Fallon, played by Joyce Meadows, has taken her father, John Fallon (Henry) to investigate that cave. There they encounter Gor, a good guy from Arous, and he’s going to teach her how to stop Vol by taking over the couple’s German Shepherd. Turns out there’s this region of the brain that Sally keeps calling the Fissure of Orlando. She’s not talking about a new Disney World ride, because frankly Disney World wouldn’t exist for another 13 years or so. She’s really talking about the Fissure of Rolando, which is a section of the brain where Vol is vulnerable to attack. It all ends well except for the several hundred killed on that base and those model airplanes.

John Agar is well known to people who love this stuff. He was in both of Clint Eastwood’s first two films, Tarantula and Return Of The Creature. Usually he played good, clean-cut guys, so this was a nice performance piece for the actor. He gets to play both the good guy and the bad guy, and he does it quite well. Of course, the performance is lost with such a low-budget film, but there are many of us who appreciate John Agar’s contributions to the genre. Robert Fuller would go on to play Dr. Bracket on television’s drama series Emergency.

The film got a little recognition when a short clip from the film ended up in the opening credits of the sitcom Malcolm In The Middle. Director Nathan Juran would also end up doing a ton of television hooking up with Irwin Allen and working on Lost In Space, Land Of The Giants, Voyage To The Bottom Of The Sea, and The Time Tunnel. But his most memorable work, at least for me, would be on the Ray Harryhausen classic The 7th Voyage Of Sinbad. He also directed a cult favorite I first encountered in a drive-in theatre, The Boy Who Cried Werewolf in 1973. The film’s makeup was provided by Universal Studios great Jack Pierce, who created the famous makeups for Karloff’s Frankenstein’s Monster, The Wolf Man, and The Mummy.

“There are some aspects of the life of an Earth savage that are exciting and rewarding; things that are missed by the brains on my planet Arous.”

Joyce Meadows worked in a ton of classic television shows for decades including three appearances for the Master of Suspense, Alfred Hitchcock. Brain was her very first starring role and likely the film that has followed her around the most even today. Sadly, she’s really the only surviving member of that cast today. She had an uncredited role in the iconic Breakfast At Tiffany’s as a party guest. She was the victim of murderer John Ireland in one of my favorite films I Saw What You Did. It’s an underrated suspense film from 1965, which was remade but never matched.

The film is presented in both full frame (1.33:1) and a wide version (1.85:1). Unfortunately, the wide presentation is merely zoomed in, and you’ll lose both some of the resolution of the restored print and a good portion of the actual physical space. It’s a big sacrifice just to avoid those black lines. Otherwise it’s a pretty solid restoration. The age still shows through, and this wasn’t on the scale of larger-budget films, but there’s some care involved here, and it’s a huge step up from the bootleg VHS tapes and television versions of the film. It’s a transfer worthy of any collector’s shelves.

There is an audio commentary with Tom Weaver, David Schecter, Larry Blamire, and Joyce Meadows. You also get a couple of 12-minute features on director Nathan Juran. The best feature on the disc is another 12-minute affair. It features Joyce Meadows returning to the desert locations of the film where she plays both herself and her character Sally from the film. It’s a nice piece that blends the story with the story of the film’s production. It’s a bit hard to explain and quite original. It’s worth the time to check it out, to be sure. I had the opportunity to talk with Joyce Meadows, and she was such a dear. I wished we could have spoken for hours. You can hear that conversation here: Joyce Meadows Interview. It would have been wonderful to talk with John Agar, but he’s no longer with us. But thanks to these releases, “Old movie stars never really die. They just get re-released on DVD’s and Blu-rays that are crammed with oodles of bonus features.”

Gino Sassani is a member of the Southeastern Film Critic's Association (SEFCA). He is a film and television critic based in Tampa, Florida. He's also the Senior Editor here at Upcomingdiscs. Gino started reviewing films in the early 1990's as a segment of his local television show Focus. He's an award-winning recording artist for Omega Records. Gino is currently working on his 8th album Merchants & Mercenaries. Gino took over Upcomingdiscs Dec 1, 2008. He works out of a home theater he calls The Reel World. Favorite films: The Godfather, The Godfather Part II, The Body Snatcher (Val Lewton film with Karloff and Lugosi, not the pod people film), Unforgiven, Gladiator, The Lion King, Jaws, Son Of Frankenstein, The Good, The Bad And The Ugly, and Monsters, Inc.
Exclusive Interview With Sam Nelson About The Adventures of Ozzie and Harriet Restoration & Release From MPI Fortress: Sniper’s Eye (Blu-ray)