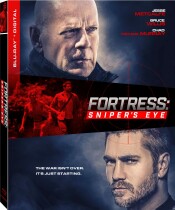 I’m coming in kind of midway through the story on this one, guys. While the film does provide a couple of flashbacks to the previous film, those flashbacks do very little to fully provide needed context, making my viewing of Fortress: Sniper’s Eye a bit of a rocky one. Based on what I gleaned, Bruce Willis and Jesse Metcalfe play Robert and Paul Michaels respectively, a father and son duo who live in and manage a top-secret resort for retired U.S. intelligence officers. The resort is attacked by a group of criminals led by a familiar enemy. It is evident that there is shared history between the Michaels and Balzary (Chad Michael Murray). As expected, the Michaels, aided by others, are able to thwart the assault despite being outnumbered and outgunned. Balzary is thought to be killed, but not before making a plea to Robert to rescue his wife from her captors, which is ultimately revealed to be the reason for the assault. This is what frames the basis for our second film. Second of a planned three, I should add.

Now that we are somewhat caught up, that brings us to our sequel in this planned trilogy. Following the assault, the Fortress facility is being shuttered, and the Michaels are in the process of decommissioning the site. When I say the Michaels, I mainly mean Paul, as Robert is recovering from injuries sustained while rescuing Sasha (Natali Yura), Balzary’s wife, thus fulfilling his former protégé-turned-adversary’s dying request. Meanwhile, the budding romance between Paul and Kate Taylor (Kelly Greyson) is about to hit its first milestone, as her mother and sister come for a visit following news of the assault.

The reunion becomes complicated when Balzary re-emerges and launches another assault against the complex. This time, the deck is stacked even higher against the Michaels, as many of the facility’s defenses have been decommissioned. Not to mention the fact that Robert is injured. Suffice it to say, the advantage is clearly on the side of Balzary.

I do recommend seeing the original film before viewing this film, just so you can have context for this film. Naturally, I know it is usual to watch films out of sequence, but sometimes it cannot be helped. This would be a case in point. For me, without that added context, it was difficult to get comfortable with the story. There were some flashbacks, and those do help, but it still was not enough to get fully immersed in the story. However, without those little nuggets of information, I would have been completely lost; as such, I am grateful for their inclusion.

In my opinion, I’m not sure this was a story worth telling. I don’t really feel like it added anything, which raises concerns for me, given the knowledge that there is still at least one more film planned for this franchise. I was initially intrigued by the idea of an old enemy returning to seek revenge. However, given that was supposedly the premise of the first film, it seems repetitive. Granted, this film threw in the idea that Murray’s character was returning from death this time; that upped the intrigue. But this was ultimately ruined with the reveal that he was not the only enemy to cheat death. I found myself relating to Metcalfe’s question: “Didn’t any of you assholes die the first time?”

The revelation of Willis’s condition changes the perspective of his performance in this film. Unfortunately, as the film’s biggest draw, it goes without saying that that causes the film to suffer, as no one else’s performances were enough to carry the film. Murray does an admirable job. His character has some measure of depth, despite not truly learning from his mistakes as he initially advertised. There are couple of situations that he should have seen coming but are easily explained away by him being blinded by his desire for revenge. That makes the film’s eventual outcome understandable, if not completely forgivable.

I slightly perplexed by the film’s title, as to my knowledge, snipers played no role in the film. I searched for a deeper meaning for the title but had to conclude that it was not for me to decipher. What I did find interesting was the fact that this film marks Chad Michael Murray’s fourth collaboration with Willis, as well as Metcalfe’s third collaboration with the Die Hard actor.

I wished there were more substance to the film’s plot. At the very least, I’d liked to have seen more obstacles put in front of the protagonist before reaching the inevitable conclusion. Maybe have their first escape attempt thwarted. That would have shown me that Balzary had learned from his mistakes. Alas, the film was destined to end the same. Additionally, there were a few unanswered questions left lingering at the end. My guess is they will be addressed in the next proposed film, but those answers will not serve at least one cast member, as their inclusion seems unlikely for the next installment.

Jeremy Butler is a film school graduate of the International Academy of Design and Technology. He is been writing for Upcomingdiscs since 2012; however, movies have played a big part of his life for much longer. Favorite genres include horror, science fiction/fantasy, and comedy. Favorite movies are V for Vendetta, Boondocks Saints, Kiss Kiss Bang Bang, and The Godfather.
The Brain From Planet Arous (Blu-ray) Minions: Rise of Gru