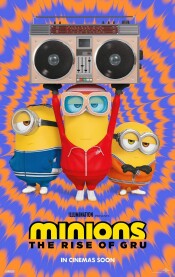 To date, I have probably seen each Despicable Me and Minions movie anywhere from half a dozen to a dozen times.  I blame most of this on my wonderful seven-year-old son, who thanks to this instant delivery of entertainment age has re-watched these movies at countless opportunities.  Naturally, my eyes glaze over at Gru, the Minions, and other supporting characters in between researching Blu-ray and 4K disc release dates.  But the truth is that it is one of the few movie series where I have went out of my way to make sure I had every 4K disc.  So, when we heard about a new movie of the little yellow guys, we were thrilled to say the least.  Eagerly, which was rare for us, we even decided to go on a Thursday night to our favorite theater (thank you Star Cinema Grill).  Let’s see how it turns out.

Let’s take it back to the 1970’s.  We see a motorcycle running through the streets and the rider sporting a purple afro with the law giving chase.  She is able to duck into a record shop named Criminal Records.  Criminal Records is a front for the notorious group known as the Vicious 6.  The person on the bike is no other than Belle Bottom (voiced by Taraji P. Henson) who has stolen a map that will lead to a special necklace which contains a stone related to the Chinese zodiac.

We are then introduced to the rest of the team which include Stronghold (voiced by Danny Trejo), Nunchuk (voiced by Lucy Lawless), Svengeance (voiced by Dolph Lundgren), Jean Clawed (voiced by Jean Claude Van Damme) and their leader, Wild Knuckles (voiced by Alan Arkin).  Wild Knuckles says that a trip to Asia is in order to find the necklace.

Later on, inside a secret passage, Wild Knuckles finds the prize he is looking for, the emerald necklace.  But getting out of the temple appears to be a little tougher as he is assaulted by all sorts of golems and narrowly escapes with the amulet.  He is then picked up by the rest of the members of the Vicious 6, who in a shocking turn take the amulet from the founding leader and proclaim Belle Bottom to be the new head of the table.  Wild Knuckles is then dropped literally from the aircraft to the ground below.  This would be a good time for the credits to roll.

We join career day at the local middle school.  Our protagonist, Gru (voiced by Steve Carrell) is asked about what he wants to be when he grows up.  He tells the class he wants to be a supervillain.  The class laughs, and then later that day we see Gru drive off with his Minions in tow.  They go to see Jaws and use a rather dastardly way to get rid of the cinema patrons already seated in the theater so he and his group of Minions can enjoy the show.  Then we go on to see other acts of villainy, and perhaps his career day proclamation was not such a stretch.

We later find out that Gru has an interview with the Vicious 6, who apparently have an opening for a sixth member with Wild Knuckles out of the way.  The interview is at noon, and while we don’t know exactly how an eleven-year-old is going to impress this criminal act, we are certain that it’s going to include a lot of laughs and Minion mayhem.

The Despicable Me and Minions movies have always played well to the time periods, whether it’s the swinging 60’s (the first Minions movie) or their play on 80’s with criminal Balthazar Bratt (Despicable Me 3) and Rise of Gru is no exception.  The 70’s feel, the costumes, and the music all speak to this time period and provide for a lot of laughs.  Let’s face it, the creators took their time in considering color choices in the Vicious 6, and it helped the movie considerably.

The voice acting was also top-notch.  Just go take a look at all of the well known actors and actresses they got on board for this entire movie.  Furthermore, Pierre Coffin, who voices all of the Minions, probably doesn’t get enough credit for the amount of work he puts in for those zany little characters.  Another character who appears later in the movie, Master Chow (voiced by Michelle Yeoh) who teaches the Minions kung fu is just yet another inspired job of getting the voice over with the audience.  Superb, silly, and a whole lot of fun.

As funny as the movie is, it also suffers from being way OVER the top.  It’s the same problem, honestly, that the first Minions film had as well.  Despicable Me and it’s two sequels in all of their laughs tend to tell a pretty good story.  Minions and Rise of Gru suffer from going all over the place, doing their best to wrap it up by the ending credits.  They also spend the majority of the movie separating Gru from the Minions storywise, which really destroys some of the cohesion the film could have had by keeping them playing off each other.  But then again, it is a MINIONS movie, which is more for the kids and those merchandising opportunities.  Unfortunately, adults won’t find too much to really interest them outside of the voice cast and time period.

In the end, I did feel that it was better than the first Minions movie, which I nearly held off on buying the physical copy because I couldn’t really relate to the time period or find much humor in the laughs that it gave me.  This movie feels more refined and better at delivering a Minions story that makes sense just barely. However, I will be very glad if the next film in the series ( this one is sure to do gangbusters) goes back to the Despicable Me format.  Rest assured, if you have a kid who has enjoyed the previous films in the series, there is zero reason that they won’t enjoy this one.  Above average family friendly movie that won’t raise the ire of any parents, and the eventual 4K disc ought to be a video/audio pleaser for sure.  Recommended.

Last Note: If you have made this far in my review, thank you.  I will let you know that there is a mid-credits scene that is worth staying for.  Enjoy.

Michael Durr has been reviewing movies for the better part of fifteen years now. He primarily enjoys thrillers, sci-fi, animation and even a little courtroom drama. His favorite films include Escape from New York, the Goonies and anything with Alyssa Milano. When he’s not praising Kurt Russell as the greatest actor of our time or scratching his head over a David Lynch flick, he’s spending time at home in Texas with his lovely wife, Lori and his amazing son. How they put up with him is a mystery, but even Basil Rathbone doesn’t have the time to solve that one.
Fortress: Sniper’s Eye (Blu-ray) Fantastic Beasts: The Secrets of Dumbledore (UHD Blu-ray) (4K)