Posted in: The Reel World by Jeremy Butler on July 8th, 2022 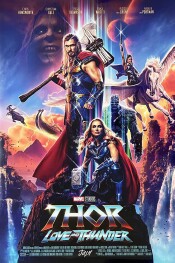 With this film, Hemsworth solidifies himself as having the most solo films of all the original Avengers. With Thor Love and Thunder, I’d say that his legacy has been assured and this film servers as a proper conclusion for the character. Circumstances suggest that this will not be the end for the character, but I cannot imagine a better conclusion than this one, so any continuations I fear would likely be subject to the law of diminishing returns. In reference to the film, It does not reach the heights that the Thor Ragnorak reached in my opinion. Even so, I found the film to still possess a majority of the qualities that made the franchise and the character beloved. Which is why I firmly feel there is no point in another installment. Better to go out on a win.

The film also host some new additions, as well as the return of some familiar faces. These inductions and returns are what injected lifeblood in the franchise. Such as Christian Bale’s induction into the Marvel Cinematic Universe as the film’s antagonist, Gorr the God Butcher. Bale without question, is among the film’s highest achievements. Through is performance, Gorr is a methodical and complex antagonist. Initially, I found myself sympathizing with his despair, as he learned that his devout faith in the Gods and sacrifice meant nothing to them. It was impossible not to understand why he took up his mission against them. My knowledge of Gorr as a character was limited prior to this induction. However, Bale’s portrayal prompting me to research the character, and from what I’ve gathered, the MCU’s portrayal is faithful to the character’s backstory. You can’t really ask for more than that.

Additionally, there are the staples from the previous film (Thor: Ragnorak) in the form of Tessa Thompson’s Valkyrie and the film’s director Taika Waititi reprising Korg, who provide some of the film’s comedic relief and serve as backup. Valkyrie’s role in the franchise felt a bit diminished in comparison to in Ragnorak. Even so, we did get a hint about her backstory, specifically about a lost love. Korg is the same, though he does serve as the film’s unofficial narrator. Add to that Waititi’s directorial duties and I’m wondering when he found time to slept between acting, directing, and narrating.

There’s also couple of faces that haven’t been seen since The Dark World that made their return in Love and Thunder. The briefest but still notable return would be Jaimie Alexander as Sif, who acts as the catalyst for Thor coming into contact with his latest adversary. Then there is the most notable return. The one that was used as the film’s significant draw: the return of Natalie Portman as Jane Foster. Not only does she return, but she’s joining the fight as Mighty Thor. This return was a highlight for me, as it was never adequately explained what happen between Thor and Jane. Prior to this, all we got was an offhand comment suggesting a mutual breakup (which seemed anything but). Thanks to Korg’s narration, we receive a better understanding of how the two grew apart. Foster has a significant arc in the film as she faces an important choice. One that frames the rest of her life and affects several characters. In essence, this dilemma is the film’s heart. For me, the hero’s dilemma she faces is my favorite part. I suspected the choice she would ultimately make, but there was still a part of me that hope for a different conclusion for her story.

This of course brings us to our protagonist, Thor, the last remaining original Avenger. When we last saw him in Endgame, he was in the company of the Guardians of Galaxy, who make a welcomed albeit brief cameo appearance here. Despite being with likeminded heroes, Thor is very clearly alone. He remains forthright in his mission of protecting the innocent, but after much loss, he has closed himself off emotionally. As the story progresses, it begins to come alive again, especially with the reemergence of Mjolnir. Mjolnir essentially moving on to another worthy candidate, does cause some emotional distress for Thor, which is hilariously played out like when you run into an ex who has moved on with someone else. This is upped by jealousy from Thor’s new weapon, Stormbreaker. This dynamic was enjoyable. All and all, Hemsworth portrayal is faithful, but at times Thor comes off like a court jester, which does get a little grating. Despite this, Thor remained a compelling figure in the MCU.

That being said, I stand by my belief that this should serve as the final chapter in Thor Odinson’s saga. As I said, I could not imagine a better conclusion for this franchise as everything was wrapped up in a succinct and satisfactory manner. True, not everything resolved in the manner in which I hoped, but I can live with how the saga ended. That is not to say there were somethings, that were initially advertised that didn’t make the final cut that would have liked to have seen. Such as Jeff Goldblum and Peter Dinklage returning as the Grandmaster and Eitri respectively. Or Lena Headey’s induction into the MCU, which unfortunately did not occur due to her scenes being removed. However, I recognize that these things weren’t possible. In the spirit of that recognition, I say let’s let Thor go out on a win, and not beat a dead horse to death with sequel after sequel. He’s got the record now, no need to pad the resume.

Jeremy Butler is a film school graduate of the International Academy of Design and Technology. He is been writing for Upcomingdiscs since 2012; however, movies have played a big part of his life for much longer. Favorite genres include horror, science fiction/fantasy, and comedy. Favorite movies are V for Vendetta, Boondocks Saints, Kiss Kiss Bang Bang, and The Godfather.
Fantastic Beasts: The Secrets of Dumbledore (UHD Blu-ray) (4K) Giant