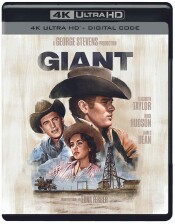 “This rare Texas air will fix you right up.”

Until The Exorcist came along in 1973, Giant was Warner Brothers’ highest grossing film at the box office. It was also the last film made by James Dean, who killed himself in a car crash two weeks before production, requiring the services of Nick Adams to step in and provide some of the voice ADR work for Dean. The film earned an at-that-time record 10 Oscar nominations. You would think that a film of this kind of historical importance and success would have been well cared for over the years since 1956. You would have been badly mistaken if you had that belief. Instead the film was allowed to deteriorate to a point where the restoration experts originally thought it could not be salvaged. After great effort and searches for better elements, the film has been pieced back together and given an impressive 4K release, and the result is an image that appears to be something of a miracle, now available to the public with Warner Brothers release of Giant on UHD Blu-ray in its native and natural 4K.

The film is based on the novel by Edna Ferber. It starts in the late 1920’s with Bick Benedict (Hudson), a guest of a family that is selling him their top stallion. At a dinner he impresses the table when he describes his large ranch. Pushed to define large, he reluctantly admits that it is over 500,000 acres. One of the daughters, Leslie (Taylor) becomes rather caustic with Birk, but it covers an infatuation that leads too quickly to the couple married and on their way to his ranch he named Benedict Reata. When I say too quickly, I refer to the fact that immediately from that dinner we cut to the couple married and returning to the Reata. It’s one of many abrupt time jumps in the film that makes for a rather awkward narrative. I have not read the novel, but I suspect there’s material between these jumps that would have made this an easier story to relate to or care about.

There’s a general narrative as we blow through 40 years of the Benedict family. The most important story involves the ranch hand Jett Rink, played by James Dean. We quickly get the idea that he’s been trouble and that Birk would rather he was gone. Those sentiments become justified when the young hand makes some passes at his wife. Nothing really happens, which is somewhat of a disappointment ,because the film has often been described and even marketed as if there was some kind of a romantic triangle between these three characters, and there is nothing of the sort going on. Leslie rejects any advances, and that’s pretty much the end of that.

Leslie has more trouble adapting to Birk’s overprotective sister, who has been kind of the strong woman of the ranch. She runs the household. Luz (McCambridge) asserts a kind of rivalry with Leslie, forcing her to stand up to the woman who has to now step back. She is a short-lived problem who becomes an even larger problem upon her death. She has always felt a little sorry for Jett and leaves him a small, apparently worthless piece of property. Both Birk and the ranch’s lawyers attempt to offer Jett $500, at least double its value, in order to keep the entire ranch intact. But Jett refuses the sweet deal, mostly to rebel against Birk and the others. He attempts to create his own ranch, for a while calling it the Little Reata. But it’s not working out, and Birk forces him to drop the name. But then one day, he wasn’t shooting at some food. But up from the ground came a bubblin’ crude. Oil, that is. Black Gold. Texas Tea. He drills the land and hits the jackpot, and as we rush past the years, he’s one of the richest tycoons in the country. Eventually he gets Birk to do the same on his land, and the two become wealthy but not anything near friends. Birk has a ton of resentment, as does Jett. It all collides at a ceremony at Jett’s fancy hotel to celebrate the groundbreaking on an airport to bear his name.

The story is ambitious, but handled the right way could have become a classic Hollywood epic, but that never really happens. The film did great at the box office, but one hast to account for the star power of Rock Hudson and Elizabeth Taylor and the fact that it was released shortly after Dean’s sensational demise. All of these factors certainly factors into why the film is considered a classic today. I was very pleased to see the film restored, and seeing it for the first time uncut was a treat, to be sure. Beyond that, the film has great historical importance  but it is far from the great film it has often been remembered as.

The time jumps make it difficult to follow the human elements of the story. We see Birk and Leslie go through various stages emotionally in their marriage, but the time doesn’t remain with us long enough to feel like we actually went on this emotional ride. Their kids grow up fast, and there’s a nice but underdeveloped story about them wanting different things in their lives. The son is played by Dennis Hopper, who also appeared in Dean’s singular true classic, Rebel Without A Cause. His youth here is somewhat startling. It’s not the Dennis Hopper most of us have known through our lives.

The film attempts to deal with the theme of racism here and sometimes is quite effective. Mexicans are treated as not “real men” and are demeaned strictly as a matter of routine. When Birk’s son marries a Mexican girl, they get to see the prejudice rather close up. Jett’s hotel denying her service at the beauty salon leads to the ultimate confrontation at the film’s climax. Like everything else, it never gets fully developed, but those scenes at Jett’s hotel are the most powerful the film has to offer.

The cinematography takes full advantage of the Texas locations, and at times you get hints of almost John Ford-like vistas. Texas is quite a theme running throughout and part of the initial confrontation Birk has with Leslie at that first dinner. She asks if Texas wasn’t stolen from Mexico, and it riles Birk’s Texan pride, bringing up such stalworth Texas images of the Alamo and Sam Houston. I’m sure there is a ton of stuff here that won’t stand up to today’s more woke sensibilities. The film is certainly worth seeing, but time and distance from Dean’s death have robbed it of much of its attraction of 1956.

Giant is presented in its original aspect ratio of 1.66:1. The ultra-high-definition image presentation is arrived at with an HEVC codec at an average of 70 mbps. The film was shot on 35mm so is native 4K. With everything I’ve heard about the state of the original elements, I honestly didn’t have much expectation here. The print is remarkably clean. There should have been an inclusion of a feature on the process. I would have really loved to see the condition of the stuff they pieced together. Maybe it wasn’t as bad as I’ve heard. The image presentation is just about spotless. There are no print artifacts and no damage done by excessive DNR. The film retains a good element of grain that truly makes this atmosphere quite organic. Colors appear to be reference for this time and film stock. There hasn’t been any effort to color correct from the original color intention. Unfortunately, there are times when the image might be too good. The age makeup as the characters get older isn’t very good, and under this kind of scrutiny doesn’t hold up well at all. This appears particularly true of James Dean, who fought against too much of the age touches. The biggest complaint I have which I do not know wasn’t true of the source material: there are some soft focus and even blur issues throughout. When Taylor and Hudson are alone for the first time there’s a close-up of Taylor that is terribly blurred. Not only blurred, but there a kind of double image like we used to get on televisions with bad aerial reception. I feel confident it’s a product of the restoration. So it’s not all good news. Still, it’s as good as the film has ever looked on home video and light years ahead of the old MPI release.

The DTS-HD 2 channel mono does what it needs to do. Anything more would ruin the atmosphere of the original film. It would be a mistake to try to expand the audio field. There’s no distortion, and a clean audio presentation is all I’m looking for here.

There are no extras.

A bit more cinema history here: I mentioned it was the best box office film for Warner Brothers until The Exorcist almost 20 years later. In an odd bit of coincidence, Mercedes McCambridge, who played Birk’s sister, also had a connection to The Exorcist, where she was actually the voice of the Demon. You could spend many hours watching the film closely looking for some better cohesion to hold it all together or looking for some additional clues as to why it has been treated with such classical status. “But I wouldn’t do that.”

Gino Sassani is a member of the Southeastern Film Critic's Association (SEFCA). He is a film and television critic based in Tampa, Florida. He's also the Senior Editor here at Upcomingdiscs. Gino started reviewing films in the early 1990's as a segment of his local television show Focus. He's an award-winning recording artist for Omega Records. Gino is currently working on his 8th album Merchants & Mercenaries. Gino took over Upcomingdiscs Dec 1, 2008. He works out of a home theater he calls The Reel World. Favorite films: The Godfather, The Godfather Part II, The Body Snatcher (Val Lewton film with Karloff and Lugosi, not the pod people film), Unforgiven, Gladiator, The Lion King, Jaws, Son Of Frankenstein, The Good, The Bad And The Ugly, and Monsters, Inc.
Thor: Love and Thunder The Adventures of Ozzie and Harriet: Seasons 1 & 2