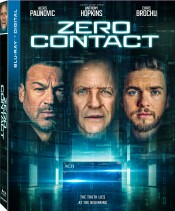 I would categorize this as a unique movie. Not only based on its premise, even though that did possess a measure of intrigue. Zero Contact has multiple things that make it unique, such as it is the first film from a major Hollywood studio to exist on the blockchain. According to my research, the film will premiere on new NFT platform Vuele, a premier platform for collecting, watching, and trading exclusive, limited edition feature-length films and collector NFT film content. However, while this is interesting and potentially could serve as a new frontier for cinematic releases, there was another factor that made the film unique in my eyes. To me, Zero Contact’s most unique quality is that the film was produced in 17 different territories entirely virtually during the 2020 global pandemic. Anthony Hopkins leads the cast and is supported by a cast of faces that I recognize, but whose names are not on the rolodex of actors that I keep in my head.

The film’s setup consist of five strangers who are remotely connected and must work together to shut down a tech titan’s most secret invention, a machine that could represent the solution to mankind’s problems or the end of life on Earth. As expected, Anthony Hopkins portrays our tech titan. In regards to his character, there isn’t much substance to him. He is predominantly referred to in the past tense by the rest of the cast, which should give you some idea to his current status within the film. Naturally, certain film sequences raise questions about this status, causing it to become ambiguous. The film’s premise leads us to believe that these five strangers are the only thing standing between the world and a potential global extinction event. While strangers to each other, each has a connection to our titan and his company; an attorney that served as the company’s outside counsel, the tech’s business partner, a freelance cybersecurity expert, and a project leader on the secret invention, and the tech’s estranged son.

Mistrust is a key component of the group’s interactions. The separation of the cast played a huge part in selling this idea in my opinion. When someone is standing in front of you or in your presence, a measure of trust is instinctively given. An example of this is the emphasis that used to be placed on eye contact. If a person could stand in front of you and look you in the eye, it improved the likelihood of you trusting them. In this film, the group has to have unwavering trust in one another despite not knowing each other and not being in the same place. To my mind, it would be nearly impossible to trust anyone under those circumstances, so the cast’s inherent mistrust in one another made this aspect of the film very authentic for me.

Another component of film is the secret invention and what it supposedly does. I won’t go into too much detail about said technology so as to not ruin it for anyone. What I will say is that it is a little hard to digest its existence. On the surface, it sounds perfectly doable, and the observed side effects of using it are believable. Naturally, you can’t be use technology that allows you to violate the laws of physics without there being some adverse consequence. Mother Nature doesn’t like it when you rearrange her furniture. In that regard, that lends an air of credibility to this technology’s existence. On the other hand, the science is a little too down in the weeds for me to fully grasp the finer points of why the titan would want to create something with such dangerous consequences. Initially the idea suggested a great loss and the desire to correct it, but midway through, that titan is the one cautioning about the risk associated with using his invention in that way. This kind of 360 is very difficult to wrap my mind around. If there was something included which highlight his own personal experience in this regard, I’d be able to accept this principle better. As is, this contradiction somewhat invalidated the motivation behind this invention’s creation for me.

While the film has limitations in some areas, the uniqueness of it made it intriguing to watch. In that regard, I’d recommend it. However, in order to enjoy the film, it will require the ability to suspend belief. Without that ability, the audience is likely to get hung up on the technical portions, which in turn will likely lead to a less favorable experience. Given that two sequels to this film have been forecast already, I certainly hope that there are enough people capable of this. As far as a new avenue for cinematic release being established, I remain on the fence as to whether this film will be the launching pad for this venture.

Jeremy Butler is a film school graduate of the International Academy of Design and Technology. He is been writing for Upcomingdiscs since 2012; however, movies have played a big part of his life for much longer. Favorite genres include horror, science fiction/fantasy, and comedy. Favorite movies are V for Vendetta, Boondocks Saints, Kiss Kiss Bang Bang, and The Godfather.
The Adventures of Ozzie and Harriet: Seasons 1 & 2 Star Trek: Lower Decks – Season Two (Blu-ray)