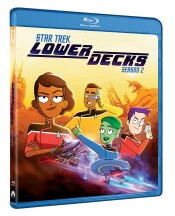 Star Trek: The Animated Series first aired in September of 1973, four years after the three seasons of what is now referred to Star Trek: The Original Series. It was a straight sequel that continued the five-year mission of the starship Enterprise. All of the original cast lent their voices to the characters they played in the live-action series with the notable exception of Walter Koenig. Chekov was replaced with an alien that had three arms and legs named Arex, who was voiced by James Doohan, as were many of the other guest characters throughout the two years the series ran. There were episodes that served as direct sequels, and so we were treated to the likes of Harry Mudd, tribbles, and the Guardian of Forever once again.  Now Paramount and CBS have brought us a second animated series, and the second season of 10 episodes arrives on Blu-ray straight from its running on the network’s streaming service.

This concept began with an episode of Star Trek: The Next Generation called Lower Decks. The episode put the spotlight on the service crew that you really never see in Star Trek unless they are wearing a red shirt and … well … let’s just say they didn’t really survive long enough for us to get to know them. When the new Trek showrunners were looking to do an animated series, they wanted something different. Going back to that Lower Decks idea was a way they could deliver Trek from a slightly different point of view. This is also the first Trek series that’s truly a comedy. It’s also intended more as an adult cartoon, and that scared me a little. I was afraid that we were going to see tons of sex and nudity on the show. Fortunately, things don’t go that far. The series does touch on those subjects in ways the other shows either wouldn’t or couldn’t. The language is certainly more adult, but the F-bombs and such get beeped. I will have to say that here in the second season I’m seeing some real South Park callbacks. Some of the voices and even the animation are starting to turn in that direction. Look, I love South Park, and I love Star Trek. Do I necessarily love Star Trek: South Park? Not as much.

The ship is called The Cerritos and is a Next Generation version of a Reliant class ship. The timeline here takes place in that Picard area of the original timeline known as Prime. The show makes sure you understand that by using an original theme that hits beats very much like The Next Generation/Star Trek: The Motion Picture theme. Yes, they were the same theme. The credit fonts use the exact same blue color and appearance as The Next Generation credits. While the series does have a captain and all of the usual bridge personnel, that’s not where the focus of the episodes can be found. We deal mostly with four service members of the crew who live way at the bottom of the ship and way in the back. It’s their job to clean coils and fix replicators. Basically, they get the dirty jobs. That doesn’t mean they lack ambition. Most would love to be bridge officers someday … even captains. Here are your main characters.

Tawney Newsome voices our central character, Beckett Mariner. She’s the kind who thinks of the rule book as something of a suggestion. She’s always looking to play outside the box, and it’s gotten her in plenty of trouble and plenty of transfers to other ships. She’s also the captain’s daughter, a fact they both tried to keep quiet. Not so much anymore. With different last names (her father’s an admiral), they’ve been able to keep a lid on it. But it makes her quite jumpy when Beckett makes a mistake, which by rules of the series must be every four-minute segment.

Jack Quaid is Brad Boimer. He’s s stickler for the rules. He expects to be captain one day, and he doesn’t want to get involved in the antics but somehow gets sucked into the trouble. At the second season start he’s on the Titan with Captain William T. Riker in command. Frakes lends his voice to his character here. When we get some glimpses of that ship, it stands in stark contrast to the Cerritos. They’re always in some tight spot or battle, and it’s making Boimer rethink his desire for this kind of assignment. He lucks out when he’s the victim of a transporter accident much like Riker was, and now there are two of them. The original Boimer goes back home to the Cerritos and his friends.

Eugene Cordero voices Sam Rutherford. He’s a cyborg with an implant on his head and an eye something like you might see in the Borg. He is the requisite socially awkward character with little to no self-confidence. It doesn’t help that he’s still learning and adapting to his implant and all of the abilities it gives him. He is having some memory storage issues that cause him to have vision issues until he makes a hard choice to jettison some of those files.

Noel Wells voices Tendi. She’s a green Orion, and she’s the brand new member of the crew. She’s young and inexperienced, so she goes overboard trying to make friends and fit in. She’s eager to learn and looks upon the grudge assignments as a way to learn. She’s mostly assigned to sickbay where she assists the ship’s medical officer Dr. T’Ana (Vigman). She’s a cat with a pretty grumpy disposition. We learn a lot about her and her people in an episode where she and Mariner try to go undercover on an Orion world. They bond a bit over the experience.

Of course the ship has a captain. She’s Captain Carol Freeman, voiced with authority by Dawnn Lewis. She’s pretty strict, but we get to see there’s a side of her that lacks the authority and confidence she displays. Jerry O’Connell voices the first officer, Commander Jack Ransom.

There are a ton of Easter eggs to be found here for Trek fans. You’ll find items and references to every version of Star Trek you can recall. You should really see how many you can catch. That would be a perfect watching game (with booze or without). There is a feature that gives some away, but there are a lot more than you see there. Let us know in the comments how many you can spot. A few of my favorite involves Jeffrey Combs voicing an evil computer. Of course, Combs has guest starred on Trek shows more than anyone else. Most of these are several characters on DS9 and an Andorian recurring character on Enterprise. There’s a new crewman who takes us back to The Next Generation episode Darmok and is of that race. Tom Paris makes an appearance. There are several Quark’s Bars throughout the galaxy. Apparently Quark has franchised out. There are some cool Klingon and Vulcan elements in an episode where we get to see life on their ships. There are waaay too many to mention here.

The first season was pretty much a group of standalone episodes. This year the Federation is dealing with a war against the Pakleds, which is actually pretty funny by itself. There are some deep moments mixed in with all of the irreverent humor. The 10 episodes fill two discs, and this final episode ends in a cliffhanger that I honestly didn’t see coming. There is also a half-hour feature on the season and a shorter feature looking at the show’s sound design. It’s a pretty tight collection that also features short animatics and a one-minute Easter egg feature for each episode and a few audio commentaries. What’s next? “We’re in Starfleet ,so who knows what’s going to happen next week?”

Gino Sassani is a member of the Southeastern Film Critic's Association (SEFCA). He is a film and television critic based in Tampa, Florida. He's also the Senior Editor here at Upcomingdiscs. Gino started reviewing films in the early 1990's as a segment of his local television show Focus. He's an award-winning recording artist for Omega Records. Gino is currently working on his 8th album Merchants & Mercenaries. Gino took over Upcomingdiscs Dec 1, 2008. He works out of a home theater he calls The Reel World. Favorite films: The Godfather, The Godfather Part II, The Body Snatcher (Val Lewton film with Karloff and Lugosi, not the pod people film), Unforgiven, Gladiator, The Lion King, Jaws, Son Of Frankenstein, The Good, The Bad And The Ugly, and Monsters, Inc.
Zero Contact (Blu-ray) Where The Crawdads Sing