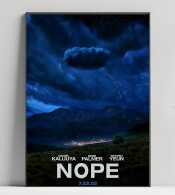 Very quirky, exciting to watch, and a sci-fi mystery you will not believe: that’s the film Nope. There have been many stories about flying saucers and invaders from space, but this wild and wacky production grabs you right from the beginning and never lets go. My kind of film; the pace is fast, and there’s never a dull moment. For years Otis Haywood, Sr. has been uneasy about happenings on his ranch.  His sudden death, however, has his sons OJ Haywood (Daniel Kaluuya) and Emerald Haywood (Keke Palmer) completely baffled. Their income has fizzled since their movie horses have been acting skittish on the sets, so OJ and Emerald want to get to the bottom of what has caused the recent disturbances at the ranch. One cloudy day, OJ sees a shiny object in the sky that he believes is an alien vessel. When it’s likely the reason for the turmoil, OJ and Emerald get set to challenge the mysterious invader. Jordan Peele does a terrific job of putting his film together, pacing it so the buildup to the finale becomes a modern-day war of the worlds. Not on the grand scale of films like Independence Day or even the movie War of the Worlds, this minimal film does it all in a rancher’s back yard.

What also makes the film good is the acting by Daniel Kaluuya and Keke Palmer, who run rampant as the unstoppable offspring.  Driven mad by the constant attacks, the two make a plan to prove what is happening on their ranch by turning it into a film.  But they chew off more than they can eat, or so their adversary thinks.

Palmer is a stitch with her high-wielding attitude as Emerald, and it really works here to get the audience all worked up about what they are viewing on the big screen. Emerald won’t stop at anything and proves that where there’s a will, there’s a way. Her performance, along with Kaluuya’s persistent OJ, makes the film a winner.

Nope has been rated R by the MPAA for language throughout and some violence/bloody images.  For everyone who likes sci-fi, mystery, and even horror, this film is for you, Be cautious when deciding to allow immature children see the film, as it does have some scenes that are inappropriate for youngsters.

John Delia has been on all sides of the movie business from publicity, writing for publications and on line blogs, script writing, to film making. Writer, critic, film editor he has worked as a film critic on this second go around for 14 years. He earned his Bachelor’s degree at the college of Journalism and Communications at the University of Florida in Gainesville, Florida. John is an active member of the Southeastern Film Critics Association (SEFCA) . Favorite Films: Lord of the Rings/Hobbit trilogies, The Godfather trilogy, the Indiana Jones trilogy (I didn't like the 4th), The Avengers and for TV it's Game of Thrones. As for animation it's a tie between anything Pixar and everything Hayao Miyazaki.
Exclusive Interview With Michael Chait: Director Of Wolf Hound The Duke (2022)