Posted in: Disc Reviews by Brent Lorentson on July 27th, 2022 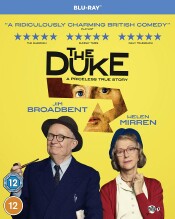 It is a shame that director Roger Michell (Notting Hill) passed away before this film had a proper release. He’s a director who while he may not have a filmography of blockbuster hits, he’s literally worked with many of the biggest stars of the industry.  Notting Hill is easily my favorite film of his; easily I’d rank it as one of the best rom-coms of all time.  Sadly he’d go most of his career not quite matching the success of the 1999 film, but with The Duke, he gives us a film that is so damn charming it shows how he’ll be missed in an industry that’s become so dependent on CGI and spectacle.

The film presents itself as “based on a true story”. When it comes to the movies, it has become harder to believe how much is actually true and how much is sensationalized to tell a “better” story. In 1961, Kempton Bunton (Jim Broadbent), stole the Goya portrait of the Duke of Wellington from the National Gallery in London and held it hostage for 140 thousand pounds. This wasn’t some simple get-rich-quick scheme that Bunton concocted, but instead it was a way to get the government to pay for television licenses for the poor, the disabled, and the elderly. Despite the noble intentions, it was a crime that could possibly land the man in prison for ten years. While the film does cover the heist and eventual trial of Kempton Bunton, the real heart of the film is about the relationship between Kempton and his wife, Dorothy Bunton (Helen Mirren).

A majority of the film is about the Buntons and how they struggle to provide for their family. Kempton is a struggling playwright that is a bit of a trouble-starter as he proceeds with his longstanding feud against the BBC and having to pay to watch the news. His antics are a bit amusing as we see him go through the process of disabling his TV from the BBC signal when inspectors from the government come snooping around seeing that he’s watching things illegally. Broadbent does such a good job with how he handles this character that is charming, witty, and aloof, but the character always seems to be performing for whoever may be in the room with him, and it’s hard to figure out if and when Kempton is ever really being genuine, though he never seems to be malicious in his actions.

Helen Mirren is equally as good in her role as Dorothy, and we definitely get to see her love and frustration with Kempton in equal parts. As an outsider looking in, we can definitely relate to Dorothy’s frustration, and then when an added tragedy of the past with a child that died, well, it’s very easy to have sympathy toward the character. The chemistry between Broadbent and Mirren is certainly what makes this film worth watching. These two roles are definitely well fleshed out and complicated characters, but these seasoned actors make their performances appear so effortless and a delight to watch.

My major complaint with the film is with the editing. The overuse of split screen just became a distraction and just pulls the viewer out of the story. While the film does have elements of a heist film, this isn’t a heist film; it’s more of a family dramedy that happens to have a heist in the storyline. It’s with the crime story elements where the film seems to shift its tone and makes the storytelling feel a bit wonky; it doesn’t ruin the experience, but it certainly is a distraction.  Then when it comes to the “high risk” stakes and the consequences of the crime in the final third of the film it just feels like a missed opportunity with the arc of the story.  It’s because of this I feel the film suffers by making no long lasting impression, and despite the good performances it becomes a forgettable film.

The Duke is presented in the aspect ratio 2.39:1.  The 1080p image is arrived at with an AVC MPEG-4 codec at an average of 28 mbps. While the presentation has a rather robust color palette, at the same time many of the costumes and locations are rather drab. The whites come through really well in the scenes at the bread factory. There is a slight bit of saturation during the daytime sequences, as though to pull off the gloomy  atmosphere of the slums where a large part of this take place. It’s a bit surprising how much detail we get in the locations and costumes and even in the nighttime sequences. Overall it is a well shot film that offers a rich presentation but I’m doubtful will wow many viewers.

The 5.1 DTS-HD Master Audio track is about what you would expect with this kind of film. This is a film that relies heavily on dialog, and it is clear throughout even with the thick British accents from some of the characters. The old time jazz score along with the older bits of music fit perfectly with this film and help set the tone for the picture.

The Making of The Duke (2:50) A very brief look behind the scenes of the film.

This is the kind of film that sadly is missing from theaters. This is film that showcases some great performances by its leads and relies on the performance and not special FX. While I didn’t love the film, I certainly enjoyed Jim Broadbent and Helen Mirren, who are showing that they can still deliver some great performances as they tiptoe their way into their twilight years. If you are a fan of the actors, this is definitely worth checking out, but if you are looking for action and suspense, this might be a bit of a snooze-fest instead.

Brent Lorentson is a horror writer and film critic based out of Tampa, Florida. With a BA in Digital Film, he co-wrote and co-directed Scavenger Hunt. His short stories have appeared in various horror anthologies. In 2019 his short script Fertile Blood will be a part of the anthology horror film Slumber Party. He is currently working on his first novel A Dark and Secret Place set to be released in late 2019. Favorite Films: Taxi Driver, Fight Club, I Saw the Devil, The Wild Bunch, Dawn of the Dead, A Clockwork Orange, Pulp Fiction, Heathers, The Monster Squad, and High Fidelity.
Nope Yellowjackets: Season 1 (Blu-ray)