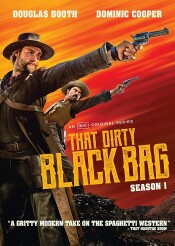 With streaming working the way it does now, every studio in the world is churning out hours and hours of television to please a growing number of viewers on multiple platforms. There’s more material produced in one year today than was produced in any decade leading up to the day Netflix opened the door on a new trend. It’s changed the way we watch television, and that extends to the networks that still operate over the airwaves. We no longer sit and watch an hour or two of television in what was once called prime time. Now we binge. The latest statistics tell us that the average person watches a minimum of four hours at a time, usually the same show. That means not only more content but a greater range of content types. A-list actors and filmmakers are joining the trend, and they’re now able to cater to pretty much every taste or genre. Along comes AMC+ and the first effort to bring the Spaghetti Western to “television”. That Dirty Black Bag hearkens back to the Clint Eastwood and Sergio Leone collaborations of the 1960’s. All of the trademark elements are there. But is it as good? The short answer is no. But it’s not quite fair to let the evaluation stand there.

The Western town of Greenvale is populated more by characters than stories. For pretty much the bulk of these first eight episodes, the story doesn’t really connect. The longer you watch, the more some things tie together, but when it’s all said and done, what stays with you the most are the characters and their unique worldviews. I guess you could call this a sit-west, along the lines of a situation comedy. The drama and the entertainment come from a series of situations that are obviously contrived to give these characters a place to live, breathe, and yeah … die.

First up is bounty hunter Red Bill, who is played by Douglas Booth. Bill is a bounty hunter who carries around the titular dirty black bag. You see, it’s filled with heads. As Bill himself will tell you, a head weighs less than a body, so it’s a good way to travel with your typical wanted-dead-or-alive denizens of the open West. He doesn’t use a gun. Rather he’s pretty handy with a small hatchet that he can use even in the standard trappings of westerns, the standoff. He’s really looking for one man in particular. We learn in frequent flashbacks to an event in his early childhood that his mother was killed in a bloody mess while he watched hiding under the bed. The bounties are just to keep him going until he finds the man he’s truly after.

In the town of Greenvale, we have the requisite corrupt sheriff. He comes in the form of McCoy, played brilliantly by Dominic Cooper. McCoy isn’t interested in paying off Red’s bag of heads. It’s got nothing to do with the heads, you understand. He’s just too busy dealing with the huge box of cash he stole when he came upon a massacre of folks from the Federal Bank. Whatever happened, a lot of money got left behind, and McCoy has plans for that money, and he doesn’t have time to get sidetracked by Red and his bag of heads. But Red goes and steals his horses on the way out of town, and now sure enough he’s got to leave the money unprotected and go get Red for stealing his horses. I mean, the precedent just wouldn’t do. More on McCoy and his money later. Don’t go away, now.

There’s Farmer Steve, played by Christian Cook. Steve has a little farm with his wife and young boy. Crops haven’t done so well lately, and there’s a guy out there named Thompson (Joseph) who believes that there’s gold under this town. So he’s bought out every farm but Steve’s. Did I mention there hasn’t been a drop of rain in years? Yeah, that’s kind of important, because that could be why the crops haven’t been coming in for a while. But Steve believes the Lord has appeared to him and told him to have faith. I should also mention that while he denies it, Steve knows there’s gold in them thar hills because he has a secret cave full of the stuff. Circumstances cause Steve to get some of it out.

You see, there’s the requisite whorehouse, or as Clint once taught us, billiards place, in town. The place is run by Eve, played by Niv Sultan. For reasons we don’t know, she gets water deliveries to the town, which gives her quite a bit of power. But she gets herself in a tight spot with the law when she has her revenge on a deputy who messed up the face of one of her girls. I think that was in the Eastwood film, also. Hmm. Anyway … it turns out she and Steve have a thing, and he uses the gold to try to buy her freedom. That doesn’t go over too well with the wife who didn’t know she was suffering while Steve was sitting on top of Fort Knox.

Like most of the Man With No Name films, this series does best when you have characters on the move. The local stuff just doesn’t hold up and was quite frankly boring. I kept hoping Steve would get shot and end that useless story thread. The real action happens with McCoy trying to bring Red back along with Mccoy’s henchman and partner in the stolen money, Curt, played by Ivan Shaw. You’ve got to feel bad for Curt, who keeps trying to get McCoy’s head right, but some people just don’t listen. This is where the show’s chemistry happens. These guys are what makes the series compelling. As the episodes and their journey unfolds, you learn more about each of these men and how they turn out to be related in their stories.

To wrap it up, we have a gang sent by Mccoy’s brother, who is hunting down our three amigos. They want their share of the cash, and the outlaw brother ends up being something of a McGuffin as the first season winds down.

Like the Leone films, this one was shot in places like Italy and Spain. That means the vistas certainly call back to those films. The violence is more Tarantino-over-the-top, and I do find that often distracting. The atmosphere is there, but not always. When we break away from our traveling men and back to the city, it’s just a same-old/same-old drama. This one needed to stay on the road more, but there’s promise for next season.

One of the really brave choices here is that anyone can get clipped. Being high on the opening credits doesn’t protect any member of the cast. There really are some surprises. I also have to ponder if this is in any way connected to the Red Dead Redemption game franchise. I’ve just dabbled in the game so far, but it sure calls back a lot of the same images down to costume choices, names, and situations. I guess only time will tell.  I won’t tell you who lives and who dies, but just remember that “For three men to keep a secret, two of them gotta be dead.”

Gino Sassani is a member of the Southeastern Film Critic's Association (SEFCA). He is a film and television critic based in Tampa, Florida. He's also the Senior Editor here at Upcomingdiscs. Gino started reviewing films in the early 1990's as a segment of his local television show Focus. He's an award-winning recording artist for Omega Records. Gino is currently working on his 8th album Merchants & Mercenaries. Gino took over Upcomingdiscs Dec 1, 2008. He works out of a home theater he calls The Reel World. Favorite films: The Godfather, The Godfather Part II, The Body Snatcher (Val Lewton film with Karloff and Lugosi, not the pod people film), Unforgiven, Gladiator, The Lion King, Jaws, Son Of Frankenstein, The Good, The Bad And The Ugly, and Monsters, Inc.
The Lost City (UHD Blu-ray) (4K) Jesus Kid