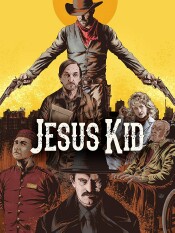 Some of my favorite movies are ones where they use the “author” as the focal part of the story.  Films like Secret Window, Misery, and The Ghost Writer are ones that immediately come to mind for me.  However, Westerns tend to be somewhere down on the list of genres for me, and only ones like Tombstone or Unforgiven tend to spark any interest.  So when I received Jesus Kid, which features a Brazilian author who likes to write Westerns, well, you can kinda understand my apprehension.  However, my curiosity was also piqued at the same time for the very same set of reasons.

Eugenio (played by Paulo Miklos) brushes his teeth late one night.  He follows it up with a mouth rinse … and a cigarette.  Then a swish with some whiskey and some pills.  Seems like a typical night for the author.  Eugenio writes western tales about a cowboy simply known as Jesus Kid (that’s Geesus, not Haysous).  In fact, he’s published twenty books about the character, and his latest manuscript entitled Ballad of the Nerves is ready for publication.

However, first he is going to meet with his friend, Maximo (played by Fabio Silvestre), who has brought along a director named Fabio (played by Gabriel Gorosito), at a fancy restaurant.  Maximo and Fabio have an offer for Eugenio.  They want to put him up for three months at a swanky hotel where he will be in total seclusion and write a screenplay about an author who is going through a writing crisis.  They compare it to the famous Coen Brothers’ movie, Barton Fink.

But Eugenio doesn’t want to do it. He has no idea how to write a ,and he wants to do a movie of Jesus Kid, not of himself or any other author.  Fabio tells the author that the Western is a dead genre.  Eugenio tells him no deal and walks away.  He then proceeds to go to his publisher for his next visit.  Unfortunately, that publisher is no longer in the market to distribute Westerns for sale.  The house has been taken over by the government and is now only going to produce evangelical books as overseen by a man named Olavo (played by Helio Barbos).  They also have an offer for the disgruntled author.

It would seem they want Eugenio to write an autobiography (as a ghost writer) of the president of Brazil.  Olavo tries to pressure the writer, but it doesn’t seem to work.  Eugenio leaves the publishing office but notices that he is being followed by someone in a cowboy hat.  After some tense moments, Eugenio decides to call back Maximo and Fabio to accept their deal for writing the screenplay.  However, once he gets to the hotel, the author realizes that this assignment comes with a few provisions that might send him right over the edge.

It’s a fascinating setup for a movie plot line, and I dare say has a bunch of actors and actresses (well, actress anyway)  who really dive into their respective characters.  The characters of Eugenio and Maximo really highlight the first thirty minutes before they get to the hotel.  But once they are in the hotel is when the fun begins.  Maureen Miranda who plays the character of “Nurse” is a wonderful delight, as is Leandro Daniel who plays “Chet” who works the front desk.  I would also be amiss if I did not mention the Jesus Kid himself, played by Sergio Marone.

The movie screams a little Tarantino and of course has references to the Coen Brothers as well which help to bolster the film.  But in contrast to the ambience and the wonderful acting is the very rough writing, which seems so odd to say.  First, the movie is incredibly rushed.  As mentioned above, it spends a lot of time building up the story and getting Eugenio to the hotel only to spend less than an hour once he gets there.  Furthermore, as rushed as the plot is (where it actually is funny and entertaining), it then ends in a super-WTF moment, and the credits roll.  Just blam, and then the curtains are drawn.  I wanted more, but it really fell short.  Woefully short; the supporting characters deserved so much better.

It should be noted that while I won’t be going over video or audio that the film is in Portuguese (Brazilian, of course) with burnt-in English subtitles.

Theatrical Trailer 2:17 and Promotional Teaser 1:01 : They really should have cut a couple of things from the trailer (would have worked better).  I won’t go into them here, but if you can avoid the main trailer (teaser is much better), it’s best.

Behind the Scenes 0:47 :  That’s not a misprint.  47 seconds of scratch footage from behind the scenes.  Much like the movie, it’s over before it really starts.

Jesus Kid was shown at the 2021 Gramado Film Festival, where it won Best Director, Screenplay and Supporting Actor (Leandro Daniel for “Chet”).  It is an interesting little film even if I think the execution fell short, a lot short, in fact.  I have no issue with 90-minute films.  After all, Secret Window is only 96 minutes long, and I adore the heck out of that movie.  But I do have a problem when it takes forever to get to the good parts and then it’s over without a second thought.  It needed room to breathe; it needed room for more hi-jinx and to build up to a finale.  Not just a finale completely out of nowhere.  Recommendation is hard here, but honestly if you have IndiePix on Amazon Channels (or have their app), there are far worse ways to spend your time.  Give it a shot and enjoy.

Michael Durr has been reviewing movies for the better part of fifteen years now. He primarily enjoys thrillers, sci-fi, animation and even a little courtroom drama. His favorite films include Escape from New York, the Goonies and anything with Alyssa Milano. When he’s not praising Kurt Russell as the greatest actor of our time or scratching his head over a David Lynch flick, he’s spending time at home in Texas with his lovely wife, Lori and his amazing son. How they put up with him is a mystery, but even Basil Rathbone doesn’t have the time to solve that one.
That Dirty Black Bag: Season 1 (Blu-ray) Night Gallery Season 2 (Blu-ray)