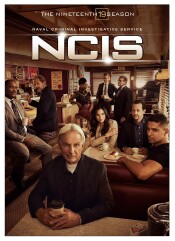 CBS releases the 19th season of NCIS on DVD, and just the sound of that gives one reason to pause. There are few shows or franchises that get to live in that rarified air. In the modern age of television, only the Dick Wolf Law & Order series has accomplished this kind of sheer mass of episodes. The NCIS landscape is certainly in for some big changes. The New Orleans show ended with its 7th season last year, a new NCIS: Hawaii has now had its first year, and we’ll be talking about that show in the days to come. The franchise will crossed its 900th episode this season with the addition of NCIS: Hawaii. CBS still had production facilities in the Island State, and those will soon be put to good use extending the family that actually started with JAG, and if you include that 10-year run, the franchise is over 1000 episodes. Shows don’t last that long without doing something right.

As the season begins we find Gibbs, thought to have been killed when his boat exploded in the final seconds of Season 18, has survived. That’s no spoiler. We learn this literally in the first minute of the season. He’s badly injured, but he still has a serial killer to catch. It doesn’t matter that he’s been suspended and for quite some time believed dead. When Gibbs sets his mind to something, watch out. And that’s how the first episode of the new season begins. Eventually the team joins to help him and the bad guy goes down, and all of this in the beautiful locations of Alaska. But now it’s time for everyone to come home … almost everyone. These four episodes also wrap up, for now, the run of Mark Harmon as Gibbs on the series.

Last year when it became obvious Gibbs and Harmon were leaving, I talked about how nice it would be to see the McGee character step into the role. Sean Murray has grown incredibly on this series. He started in the first season as the “probie” new guy and now is the office’s senior agent and in charge a lot when Gibbs was either off playing Butch and Sundance with Fornell or suspended. He’s good at it, and I’m I thought there would be some possible passing of the torch down the road. Earlier I would have sworn the show couldn’t go on without Gibbs, but look at the 20 years of spin-off accumulation, and I can see NCIS someday without Gibbs. Murray could have very easily taken on that role. What a wonderful evolution over the years for the character and actor. I just wish Tony could be there to see it. It didn’t turn out that way, but that 20-year evolution for the character has been very compelling.

Every year the show appears to take on some kind of a theme. I can’t say that it’s at all intentional, but it appears to work out that way. This year there is very much a feeling of mourning going on, and it intrudes on pretty much every episode. They all are, to some extent, mourning Gibbs even if he’s not dead. It hits Nick (Valderrama) the hardest. Since the emotional arc with his father last year, Gibbs has kind of taken that role. He was also getting close with Bishop, and now both have left without even saying goodbye. It hurts his work, and he starts spiraling until he does finally find some things to hold on to.

Jimmy is grieving the loss of his wife last season, and we finally get to meet his daughter when he brings her to work only to end up trapped with Kasie in the lab with a deadly bio-weapon. It’s a great bonding moment for these two characters, and I think the first time I really accepted Diona Reasonover in the fold. I know it took a long time, but I really missed Abbie. Jimmy also misses the steady presence of Duckie (McCallum). David McCallum is only in three or four episodes this season. It looks like that will continue going forward. The actor is nearing 90, and I can’t blame him for wanting to cut back, but I think the rest of us share Jimmy’s sadness.

The bigger news of the season is the addition of two new team members. You might remember Katrina Law from the Arrowverse where she played the kick-butt daughter of villain Ra’s al Ghul, Nyssa. She also spent a season on Hawaii Five-O as team member Quinn. That creates a bit of a paradox on the show. The franchise has crossed over with Hawaii Five-O, putting them both in the same fictional universe, so she has a doppelganger out there. What is more, this season crosses over with NCIS: Hawaii, taking her back to the islands as a different character. She is also grieving the loss of her REACT hostage negotiation team last year, which is where we first met the character. So she’s not completely new, but indeed a new regular.

Gary Cole joins the show as Gibb’s replacement Agent Parker. It’s a rather clever introduction. During the Gibbs wrap-up he plays an FBI agent who has orders to arrest Gibbs for various stuff he kinda did. At the last minute he lets him go and gets fired. Leave it to Vance (Carroll) to offer him the job at NCIS. Parker is not Gibbs, and the team has to adjust to the new style. He’s far more outward than Gibbs and brings international pastry for the team in the morning. He claims his superpower is finding the best international pastry in the oddest locations in any city. Fortunately for Parker the he bonds with the team, and just in time for the final episode of the year, which ends in a cliffhanger and Parker framed for murder. He’s going to need his new team to be willing to bend some rules (AGAIN), but this time for the new guy.

I like the additions and hope both get some good years to develop these new characters. Parker might have been the hardest to accept, but you will be amazed how quickly you take to him.

You get all 21 episodes on five discs. You also get the NCIS: Hawaii episode. I really love when they include these, because otherwise you’re forced to buy two sets to see the episode conclude. Props to CBS for doing this, as they’ve been doing throughout the run of the franchise. There’s a brief feature on Gibbs. One on the new players, and a look at some of the more interesting characters this season. It’s certain that there will be a 20th season, so we’ll get to spend at least another year with this team. Many of you thought that Harmon’s departure would bring down the curtain. He’s still listed as a producer and remained on the opening credits all season. He may return, but never will he return completely. Either way, let me assure all of you NCIS fans out there …  “This isn’t how it ends.”

Gino Sassani is a member of the Southeastern Film Critic's Association (SEFCA). He is a film and television critic based in Tampa, Florida. He's also the Senior Editor here at Upcomingdiscs. Gino started reviewing films in the early 1990's as a segment of his local television show Focus. He's an award-winning recording artist for Omega Records. Gino is currently working on his 8th album Merchants & Mercenaries. Gino took over Upcomingdiscs Dec 1, 2008. He works out of a home theater he calls The Reel World. Favorite films: The Godfather, The Godfather Part II, The Body Snatcher (Val Lewton film with Karloff and Lugosi, not the pod people film), Unforgiven, Gladiator, The Lion King, Jaws, Son Of Frankenstein, The Good, The Bad And The Ugly, and Monsters, Inc.
Film Noir: The Dark Side of Cinema VIII (Street of Chance / Enter Arsene Lupin / Temptation) (Blu-ray) Wheel of Fortune and Fantasy (Blu-Ray)