Posted in: Disc Reviews by Michael Durr on August 19th, 2022 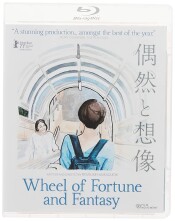 When I am not writing reviews, playing games, having a family, oh, and also having a job (because writing reviews doesn’t exactly pay), I do try to dabble in the occasional short story.  Perhaps it’s fantasy or science fiction, but I like spinning tales about a world that I want to be a part of even if its just for a few minutes.  It’s relaxing, and that’s why when I saw the opportunity to review Wheel of Fortune and Fantasy, a collection of three tales steeped in chance, culture, and some wonderful word banter, I knew I’d enjoy my time.  Let’s take a look.

The stories are broken out in “Episodes”.  Here is a brief summary of each one:

Episode 1: Magic (or Something Less Assuring)

We start off with a photo shoot with some female models.  Two of those models later jump into a taxi cab to share a ride back to their respective homes.  Tsugumi (played by Hyunri) spends her time in the cab talking about the new guy she met and how it was so magical.  Her friend, Meiko (played by Kotone Furukawa) asks her questions and engages in conversation with her about the experience.

Tsugumi gets out first, leaving Meiko behind.  However, rather than proceed to go to her dwelling, Meiko gets the cab driver to drive around a bit to arrive at a different spot.  It is there where she finds the exact individual she really wants to talk to, Kazuaki (played by Ayumu Nakajima).

A student named Sasaki (played by Kai Shoma) grovels in front of his French Tteacher, Mr. Segawa (played by Kiyohiko Shibukawa) for a better grade in his class.  When another teacher tries to close the door to give the two some privacy, Segawa tells the other teacher no, as it could be viewed as harassment.

We fast forward in time, as we see Sasaki share a romantic moment with a married woman named Nao (played by Katsuki Mori).  After a romp, they both watch television where they see Segawa, who has a won an award for his new book.  Sasaki tells Nao that this professor ruined his future and wishes to launch a “honey trap” against him with Nao as the bait.  Nao reluctantly agrees after a little persuading.

In the late 2010’s a virus named Xeron becomes prevalent by sending random files from the host computer to people they previously contacted.  By 2019, classified information has been passed to all sorts of countries, and ultimately the entire world is offline.  The only way of communication is by postal mail and telegraphs.

Moka Natsuko (the subtitles read Natsuko Higuchi) (played by Fusako Urabe) attends her class of 98 high school reunion and talks to a few classmates.  Natsuko eventually leaves the party and crashes.  The next day she wakes up and goes to eat a pork cutlet bowl.  On the way to Sendai Station, she sees another girl she apparently recognizes from high school, Nana Aya (the subtitles read Aya Kobayashi) (played by Aoba Kawai).  Aya invites Natsuko over to her house for tea and to engage in conversation.  It’s there where they find out who they really are.

The first short film really sets the tone for the entire trilogy.  It was very interesting to see the two models go back and forth over Gumi’s new found love interest.  It actually made me think of one of my favorite films, Night on Earth, and I secretly hoped the rest of the movie was going to be in different taxi-cabs.  Wishful thinking on my part I guess.  Anyway, the conversation flowed so well, and was so engaging.  Then once the twist came into play, it added another layer to this wonderful short.

The second short was interesting in the aspect that it took the film into the subject of harassment.  It also upped the eroticism some here, but without jumping too far.  Again, I felt the conversations back and forth were very engaging.  While I did feel the ending was a little sad,  it was still well executed.  It was perhaps not as interesting as the first flick, but a fine second piece.

The third short film I think took a step back and was a weaker entry.  There is no “tension” between the two females in this one, and it’s simply at the end of the day a conversation that really doesn’t go anywhere.  I liked it, but it’s nowhere near the strength of the first two pieces.  The ending was nice, but at the same time it felt like it was just there.  It also doesn’t help that they put this “virus” message at the front of film when the story barely touches that scenario outside of saying that there are no more streaming services and physical copies still exist.  LONG LIVE THE DISC.  I’m biased; I can’t help it.

This movie is filmed in a 1.85:1 widescreen format.  Even though each episode is confined to three locales for each short film, we get to see a lot of vibrant scenery.  The color is well done, and really does a lot of justice to what are very simple films in concept.  It’s this relatively minimal but wonderfully complex ways to show off the landscape.  Skin tones are natural, and it’s a very pleasing movie on the eyes.  No concerns here, and the video should only further enhance your experience.

The sound to this film is presented in DTS HD 5.1 Master Audio (2.0 track also available) in Japanese with English subtitles.  Much like the video, there is nothing fancy here, and a minimalist approach is taken.  Dialog is balanced with the right volumes, and there are no issues with any outside scenes that hamper the listener’s ears.  Since you have to pay attention in this movie to a lot of the conversation nuances, I really liked that the sound for this film allowed for that, and I rarely missed a word (except when I was taking down notes, which was my own fault).

Interview with Director Ryusuke Hamaguchi 13:57: In Japanese w/English Subtitles (well, for 99% of it), the moderator goes over with the director about the film and how the concept came to be and lots of comments about “Chance”.

Bonus Short Film: The Chicken 13:13:  In Japanese w/burnt in English subs and some English parts (no subs), PCM 2.0.   The best I can tell is this couple and a friend move into a New York apartment, and then the husband buys a live chicken because he wants to have a farm some day.  They watch some elderly person sprawled out in the street and try to help him before he is taken away to the ambulance.  Back at the apartment, the husband can’t kill the chicken, so the pregnant wife has to do it instead.  Then she breaks water and they go to the hospital leaving the friend behind to wipe up the mess of all things.  And that’s it.  Seriously.  Let’s move on.

Wheel of Fortune and Fantasy Trailer and other Film Movement Trailers :  There are plenty of trailers here to peruse through.  First of course we have the trailer (1:47) to Wheel of Fortune and Fantasy.  From there we have three trailers are included and are listed as follows: After the Storm (2:00), Oh Lucy! (2:11), and The Real Thing (2:06).  I still want to see Oh Lucy! but haven’t gotten around to it.

This film was nominated for a staggering 23 awards and received seven wins at the Berlin International Film Festival, Chicago International Film Festival, and the International Cinephile Society Awards among others.  The film is a fun one and actually has some replay value, which I did not expect when I placed it in my player.  The conversations back and forth strike up additional questions in the audience’s head and keep the viewer interested, which is difficult in this action-first society.

Technical merits are strong in this one with pleasing video and audio that will do nothing but enhance the experience of this movie.  The extras are sadly a bunch of throwaways that I will never watch again (because who wants to watch a pregnant woman slit a chicken’s throat?).  But that’s minor at best, and I really hope that we see a sequel to Ryusuke Hamaguchi’s work here with three new stories, especially along the lines of the first two shorts.  Heavily recommended, and enjoy.

Michael Durr has been reviewing movies for the better part of fifteen years now. He primarily enjoys thrillers, sci-fi, animation and even a little courtroom drama. His favorite films include Escape from New York, the Goonies and anything with Alyssa Milano. When he’s not praising Kurt Russell as the greatest actor of our time or scratching his head over a David Lynch flick, he’s spending time at home in Texas with his lovely wife, Lori and his amazing son. How they put up with him is a mystery, but even Basil Rathbone doesn’t have the time to solve that one.
NCIS: The Nineteenth Season Murder at Yellowstone City