Posted in: No Huddle by Brent Lorentson on August 20th, 2022 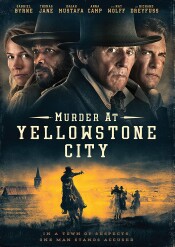 With the success of Yellowstone and the spin-off series 1883, I’ve been patiently waiting for a resurgence of westerns to come out. Bone Tomahawk and The Hateful Eight are pretty much the best westerns we’ve gotten in the past decade, and they both came out in 2015, so I feel we are long overdue for a great western (sorry, but The Power of the Dog didn’t impress me in the least). While I’m always hopeful a new title will impress me, unfortunately, despite the solid cast, Murder At Yellowstone City is a film that simply disappoints. Cicero (Isaiah Mustafa) is a drifter and a recently freed slave who happens to be a big fan of Shakespeare. It’s his unfortunate luck that he rides into Yellowstone City, Montana when a prospector has struck gold, and soon after the prospector finds himself on the unfortunate end of a gun. Sheriff Ambrose (Gabriel Byrne) doesn’t take long to arrest Cicero, considering he’s the new face in town and ignores the notion that just about any other person in town would have a good reason to kill the prospector. The film is definitely an ensemble piece with each of its characters having a secret. If executed properly, this could have been a fun murder mystery, but the Sheriff simply is too lazy to investigate anything, even as more dead bodies start showing up around town.

The mystery element of the film is even taken away about midway through the film as the plot goes into all too familiar territory with generic storylines that simply lead to an evitable shootout. Filling out the cast is Thomas Jane as Thaddeus Murphy, the town preacher, who has a mysterious past and is one of the only ones who believes that Cicero is innocent of being the murderer. What Jane is able to do with this character is genuinely one of the more enjoyable aspects of this film, though I wish they didn’t take this character in such an obvious direction as the film plays out. Richard Dreyfuss is Edgar Blake, the town barkeep, who is friendly with everyone, and while it is nice to see Dreyfuss on screen, well, there simply isn’t enough of him. Aimee Garcia (Lucifer) plays Isabel, one of the town’s many prostitutes who has a connection to the deceased prospector and of course wants to see vengeance. I mention that there are a lot of prostitutes in this town. Well, it just seems that all the women in the town are prostitutes with the exception of the preacher’s wife and the prospector’s wife. The town isn’t quite a boomtown, and I’ll simply blame the low budget for the mostly empty streets and lack of diversity with a background cast.

What stands out most about the film is the cinematography from John Garrett.  When you check out Garrett’s filmography, you’ll see that he’s had some experience working on some much bigger projects, and it is what helps elevate the film. From the beautiful wide shots to the action sequences, the filmmakers definitely upped their production values with Garret working his magic behind the lens.

At the end of the day, Murder At Yellowstone City isn’t a great film, but it does have some entertainment value even if the story feels familiar and a tad bit predictable. The cast and cinematography make the viewing experience tolerable, but I wouldn’t go out of my way to see this.

Brent Lorentson is a horror writer and film critic based out of Tampa, Florida. With a BA in Digital Film, he co-wrote and co-directed Scavenger Hunt. His short stories have appeared in various horror anthologies. In 2019 his short script Fertile Blood will be a part of the anthology horror film Slumber Party. He is currently working on his first novel A Dark and Secret Place set to be released in late 2019. Favorite Films: Taxi Driver, Fight Club, I Saw the Devil, The Wild Bunch, Dawn of the Dead, A Clockwork Orange, Pulp Fiction, Heathers, The Monster Squad, and High Fidelity.
Wheel of Fortune and Fantasy (Blu-Ray) Beast (2022)