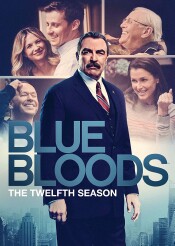 “At this point I have lost the capacity to be surprised. Is there a point where nothing can surprise us, or have we reached that point and didn’t even know it?”

For 12 years Blue Bloods has been a staple on CBS, giving Tom Selleck a chance to completely redefine his television career. The once cocky and carefree Magnum P.I. now has established himself as the wise patriarch. It’s a transition that a 1970’s audience would never have bought. But now he’s become a new kind of airwaves icon. The show has also managed to make it through over a decade with very little change in the cast, and most of that coming from additions. In the real world the police have been villainized by some, and it’s becoming an increasingly tougher job to do. For a family so steeped in law enforcement, the show was going to have to address these new realities. That happens this year, and for the first time since all of this Defund the Police stuff started happening, we get a series that gives us some honesty and truly looks at the issue from both sides without preaching or disparaging. It shows up in the stories and the increasing conflict between Frank (Selleck) and the DA’s office, where his daughter Erin (Moynahan) is toying with the idea of running for the head job herself. No matter what side you might be on, I think you’ll find the balance here truly refreshing. I know that I do.

Each week there is the traditional case-of-the-week format. The cases get played out pretty much the way a normal cop show might play, and then there is the family dynamic. Cases may cause friction and stress between the family members. Here is where the performances and strong characters make this a very different show from the rest of the police dramas out there. There’s just enough of the mythology arc to keep things interesting. The stories are usually standalone, and you will enjoy this slightly different take on the cop show. Each episode has the family sitting down to Sunday dinner together. These extended family gatherings are the heart and soul of the series. This is where the family dynamics come together, and we see the issues of that episode not from the perspective of a police or district attorney’s office, but through the lens of a close family. This is really where things are worked out, and the scenes have become the identifying element on the show. There’s a little piece of us that wants to be sharing in those meals and discussions. More than anything else, I think it’s one of the things that keep fans coming back week after week to take our honorary seat around the Reagan table.

There are a few recurring themes in the season that intertwine themselves in the typically standalone episodes. Frank has a bit of an uneasy relationship with yet another city mayor. Mayor Peter Chase is played by Dylan Walsh. The Police Commissioner serves at the pleasure of the mayor, but when Frank takes a stand here and there, we know the truth is something quite different. He practically dares the guy to fire him on a couple of occasions and even looks to snipe his son Jamie to lead his protection detail.

Everyone has their troubles this season. Jamie (Estes) is pushing his authority at the station house. and that often puts Eddie (Ray) in the middle as Jamie becomes more and more unpopular. He scores some crucial wins that show he might be onto something, but I don’t think he ever really wins the officers under his command as much as Eddie would like him to. He gets into a little trouble himself when he’s slipped a drug at a party and ends up in hot water when he comes to the rescue of a crash victim and doesn’t pass the drug test. He’s also trying to bond with that newly-discovered half-brother Joe (Hochman), and it causes friction with a case they work together, but that relationship starts to develop, and by the end of the season they team up voluntarily to get justice that no one else really cares about delivering. Jamie also has to deal with the realization that his grandfather, Henry (Cariou) is declining in his cognitive abilities.

Erin is thinking about running for DA, and that kind of goes on and off again throughout the season, but by the end she’s made the decision to go for it, and I think that’s going to really drive the stories next season. Her relationship with Anthony has some real lows this year, and I kind of feel more for Anthony during their fights. She really doesn’t treat him so well, but he’s loyal as a German shepherd, and I just love seeing former Sopranos star Steve Schirripa on the show. He’s quite the lovable lug, and even though he didn’t come in until about six years ago, I can’t imagine the show without him. Actress Bridget Moynahan gets to direct for the first time this season, and Anthony makes it to a family dinner where he tries to teach these Irishmen a thing or two about cooking.

The show has so many standout players that you just can’t cover them all in a place like this. Former Hill Street Blues cop Robert Clohessy continues to shine as Sid, while Gregory Jbara impresses as Garrett and Abigail Hawk as Abigail. These Three Musketeers are the advisors to Frank. They end up feeling guilty when they run out a young cop who requests to be assigned there because she’s a bit to feisty and she ends up shot in the line of duty. She survives, so we might not have seen the end of that.

Danny has another pretty rough season. There’s a hit put out on him, and if it weren’t for the fact that the hitwoman given the contract has a pang of guilt, he would already be toast. He also finds a bit of guilt on himself when he pressures a gang member into flipping by giving him a ride to the steps of his fellow gang members to make it look like he did flip. The threat doesn’t work, and he nearly gets the kid killed. Jimmy Buffet guests stars when Danny gets conned by a lookalike out of an expensive meal. The “real” Jimmy comes to make it right.

Speaking of guest stars, there are good ones this season. Tony Danza stars as a cop who has a criminal son who almost gets his family killed. Frank puts pressure on him to distance himself from his son or lose his badge and maybe his life. Lyle Lovett returns as Texas Marshall Waylon Gates and works with Danny to bring down the drug cartel leader who killed his partner. Let’s be honest. Lovett isn’t going to win any awards with his acting, but the character is just so much fun to watch. Kind of reminds me of another relatively wooden actor who also played a Texas cop, and turned that into a ten-year gig.

One of the frequent guest stars is Stacy Keach as Archbishop Kevin Kearns, who is also a close friend of Frank’s. The two share a lot of history, but they also share one compelling dynamic when they’re together. The two actors kind of come from that same era of cop shows, and I can’t get enough of the chemistry they share. A lot of that credit goes to the fact that both have really done an incredible job of redefining themselves in their more golden acting years. This is Selleck’s best work ever, and I’m sure that will tick off some Magnum fans, but I don’t think it’s even close.

Blue Bloods is the first television drama to capture the best of the police procedural and also the warmth and charm of the family drama. It’s like NYPD Blue invaded the set of Brothers & Sisters. The show brings incredibly good writing and production values that do look and feel like a film every week. You hear that a lot from series show runners, but this is one of those rare cases where it is true. It doesn’t hurt that the show has a strong cast that includes the likes of Tom Selleck and Donnie Wahlberg. It doesn’t work unless everyone connected with a show buys into a common goal. That’s exactly what you get here, and it shows on the screen.

You get all 20 episodes on five discs. There’s the standard season wrap-up. Of course, you get some deleted scenes. There are features on Erin and Anthony, Moynahan’s directing debut, and a gag reel. The season still has legs, and I think a lot to say in today’s world. I could watch this another 13 years. “Thank you for your service.”

Gino Sassani is a member of the Southeastern Film Critic's Association (SEFCA). He is a film and television critic based in Tampa, Florida. He's also the Senior Editor here at Upcomingdiscs. Gino started reviewing films in the early 1990's as a segment of his local television show Focus. He's an award-winning recording artist for Omega Records. Gino is currently working on his 8th album Merchants & Mercenaries. Gino took over Upcomingdiscs Dec 1, 2008. He works out of a home theater he calls The Reel World. Favorite films: The Godfather, The Godfather Part II, The Body Snatcher (Val Lewton film with Karloff and Lugosi, not the pod people film), Unforgiven, Gladiator, The Lion King, Jaws, Son Of Frankenstein, The Good, The Bad And The Ugly, and Monsters, Inc.
NCIS: Los Angeles: The Thirteenth Season The Tarzan Vault Collection Film Detective (Blu-ray)