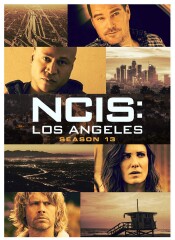 You shouldn’t need a primer on the NCIS franchise by now. Unless you’ve been living under a rock for the last decade or longer, you’re up to speed on these guys. If not, you still could have some fun and enjoy the CBS DVD release of NCIS: L.A., but NCIS has been around for nearly 20 years, and this particular version has been around for 13 seasons now. That’s a lot of characterizations under the bridge and a ton of character evolution and stories that can’t help but give you maximum mileage out of the release. If you aren’t up to speed, you can check out over 30 seasons of various NCIS reviews by just banging it here: NCIS Reviews. That should keep you busy long enough to get you to the point that we’re here talking about Season 13. So hopefully you are up to speed, and we can get on with it. Shall we?

“Not the first time Hetty’s disappeared for an extended period of time.”

Once again, Linda Hunt is absent throughout most of the year. We really see her perform a few key duties in the first episode only. It’s not just COVID. Hunt suffered a pretty severe accident a while back, and she’s not exactly a spring chicken, so she’s been mostly MIA for a few seasons now. Still, she’s really a heart of the show, and they find ways to keep her toes in the water. Most of the season we learn that Hetty has been grooming G since he was eight years old in a secret project that mirrored a Soviet program much like Black Widow went through in the Marvel Universe. As the season begins, G has broken into Hetty’s files and discovers the program and information on a Subject 17. His year-long arc is to find out if that was him. An old enemy shows up with a new face and is using deep fakes of G, and eventually the whole team, to play some nasty tricks. She is able to fool people into thinking they are video chatting with G and the others. That could get someone killed, which is, I think the point.

Helping fill that command presence is Simon & Simon’s Gerald McRaney as retired Admiral Kilbride. He’s a regular now and a great presence this season. McRaney is king of the grumpy one-liners and a perfect balance to the light characters of the team. The other characters all get big story elements this season, and these folks continue to grow right there on our television screens. McRaney is doing great work and actually adding a bit to the comedic elements of the show.

Deeks (Olsen) and Blye (Ruah) get some of the better character development this season. They’ve been trying to have a kid and end up deciding to go the adoption route. If it makes you laugh a bit to think of Deeks getting evaluated for the job, you already see where it’s all going. The character has matured and still gets to play the immaturity. It’s a nice balance, and it helps that these two have really nice chemistry. The season comes together in a touching way to make something happen for the couple in the final episode of the season. Growing up also means having to sell the bar, which never really ended up being a strong story thread. The only real consequence is that G has to find a new place to live. More on him later. Daniela Ruah also gets to direct this season, and she gets to start out with a bang. She directs the show’s 300th episode. Quite a milestone, but not anything new to the NCIS franchise.

Last season saw a couple of newcomers, and their roles on the team become a bit more solidified this season. Medalion Rahimi plays Special Agent Fatima Namazi, and while she gets some nice moments in the field, she is now serving more and more as the tech wizard on the team. That’s filling big shoes since the departure of both Nell and Eric really a couple of seasons ago. That doesn’t mean she doesn’t get to kick some butt and get into a little danger during the season. Caleb Castille plays Special Agent Devin Roundtree, and he ends up splitting his time out in the field and the tech backup to Fatima. I’m a little concerned that they’re going to be a more literal replacement for Nell and Eric, as they appear to be pushing a relationship between them as well. I’m kind of OK with the Deeks/Blye thing because it’s played so often for good laughs, but really we need to cool off on the others for now. I like Roundtree more out on the field. He’s young and eager and more likely to make those energetic mistakes, and I like that in the character more than when he’s tied to a computer or tablet.

Hanna (Cool J) doesn’t get as much development, but that doesn’t mean it’s zero. His dad is getting older and more in need of his help, so he sells the boat to buy a real house for the both of them to live in. We finally get to meet his dad, played extraordinarily by Richard Gant. When a DOJ officer is killed, Hanna steps back into his “Switch” undercover persona, and it makes for one of the best episodes in the season, so maybe he’s getting plenty of character arc after all.

Finally, G is dealing with his discovery of the program he was in. It brings him closer to Anna Kolcheck (Paly), and that’s where he goes when he can’t live in the bar any longer. As he gets closer to her, it allows us to spend some time with my favorite recurring character, and that’s her dad, Arkady, played so well by Vyto Ruginis. You can never get me too much Arkady.

Another favorite episode this season involves a Navy pilot who gets taken down by a UFO … or as they call them now UAP, and fights to figure out what happened when the Navy wants to call it a bird strike even though his carrier saw the object on their radar. Our team solves the puzzle which … unfortunately? … isn’t an alien visit. The final episode of the season was written as a possible series finale. While it was likely the show was going to get renewed, it wasn’t a done deal by the time they had to write the season’s final episode. It ends with a nice beach gathering that could certainly have served as a goodbye. That isn’t to say that there aren’t still plenty of threads left hanging for the team to pull on next season. It was strictly a case of covering all angles. But it will be back.

You get all 22 episodes on five discs. There are the usual selected deleted scenes as well as the typical season round-up. You also get a gag reel, feature on the 300th and Ruah’s directing debut, a Deeks/Blye relationship feature, and one on Sam’s Dad. By the way, I should note that episode 300 was not just directed by Ruah, but written by her on-screen partner, Eric Christian Olsen. So we’re absolutely going into Season 14 with that “mystery” villain, but I have to say, “I’m not going to miss that old deep fake thing.”

Gino Sassani is a member of the Southeastern Film Critic's Association (SEFCA). He is a film and television critic based in Tampa, Florida. He's also the Senior Editor here at Upcomingdiscs. Gino started reviewing films in the early 1990's as a segment of his local television show Focus. He's an award-winning recording artist for Omega Records. Gino is currently working on his 8th album Merchants & Mercenaries. Gino took over Upcomingdiscs Dec 1, 2008. He works out of a home theater he calls The Reel World. Favorite films: The Godfather, The Godfather Part II, The Body Snatcher (Val Lewton film with Karloff and Lugosi, not the pod people film), Unforgiven, Gladiator, The Lion King, Jaws, Son Of Frankenstein, The Good, The Bad And The Ugly, and Monsters, Inc.
South Park: The Complete Twenty-Fourth Season (Blu-ray) Blue Bloods: The Twelfth Season