Posted in: No Huddle by Gino Sassani on September 15th, 2022 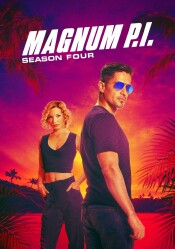 Revamping old shows and movies is the latest trend in television. CBS has made several attempts at this with varying success. Such was their attempt when they tried to convert Rush Hour into a TV series. It failed badly. But then there was Hawaii Five-O, which got 10 seasons and was pretty solid. The MacGyver reboot gaining a fourth season puts this attempt somewhere in the middle. The show has been on the bubble for the last two seasons and this year it was finally cancelled. But that wasn’t quite the end of the story. Part of the reason was an inability to renew the rights from Universal at the kind of money CBS thought the show was worth. Now NBC, which is owned by Universal, has given the show a second chance with a 2-year renewal. The cast and crew appear to be intact, but with some contract negotiations it’s possible that someone may drop out, leaving room for something new. So Magnum is back, for now starring Jay Hernandez in the titular role. The character that Tom Selleck made famous is breathing new life with new action. Minus the mustache, of course.

Staying true to its source material, Hernandez’s Magnum is a former Navy Seal, and his best friends T.C, played by Stephen Hill, and Rick, played by Zachery Knighton, are Marines. While staying true to its source, the series also digs deeper into the characters’ connection by illustrating the three as former POWs. The show also explores many of the plights of vets that include Shammy, played by Christopher Thornton, as the wheelchair-bound comrade they rescued from down and out who is now a big part of the team.

With the exception of this arc, every episode unfolds in a Monster of the Week format, which is best suited for the show in my opinion. It makes every episode a standalone, assuring that audience members can enter the show at any episode without fear of being completely lost, as well as guaranteeing that each mystery will be wrapped up by episode end, reducing anxiety attributable to curiosity over what will happen next. Like the original series, each episode features a voice-over narration from Magnum. T.C. and Rick also draw parallels to their original characters, with T.C. owning and operating a helicopter business that Magnum uses as his own private chauffeur service, while Rick is a club owner (TC is a not-so-silent silent partner) with connections that Magnum uses to solve his cases. Of course there is a bit too much of the will they/won’t they relationship stuff going on between Magnum and Higgins. Yeah, you heard that correctly. No, Magnum hasn’t gone woke. This is Juliet Higgins, a former MI-6 British agent, played by Perdita Weeks. Though their relationship starts off coolly, they eventually develop a friendship leading to her using her former MI-6 skills and contacts to aid him in his investigations. Now they are partners in the detective agency. Of course, those feelings are evolving in ways the original show would not have even hinted at. But what about the Hawaiian shirts and the Ferrari, you ask? Well, these two items are also featured in the reboot.

Amy Hill adds the heart of the show as Kumu, who takes care of the estate. I think she’s terribly underused, but they appear to be working her in more this season than in the past. I hope she survives the network switch.

Magnum is also a bit of a pain for Hawaii Detective Katsumoto, played by The Mentalist’s Tim Kang, once again playing a detective. The relationship reminds me a lot of the one between James Garner’s Jim Rockford and police officer Dennis Becker from another detective show that aired back in the days of the original Magnum. There’s a kind of love/hate relationship here, but a grudging respect.

As the season starts, it’s been five months since Higgins left with a boyfriend to help out Doctors Without Borders. She gets into trouble when she goes on a mission to recover crucial meds stolen by a warlord. It puts the doctors, including her guy, in danger. MI-6 offers to fix the problem if she returns to Hawaii and does the occasional job for them. Meanwhile Magnum has moved on and is dating Katsumoto’s partner Detective Lia Kelo, played by Chantal Thuy. They don’t think anyone knows about it, but of course, they do.

Another new character is added to the cast when TC tries to help a homeless kid who is looking for work at the bar. Cade (Martinez) becomes pretty much like a son to him. They develop some solid chemistry, and Cade is a good addition to the crew. Meanwhile Rick discovers that he and his girlfriend, who left the islands, are going to have a kid. Suzy is played by Zachery Knighton’s real wife, Betsy Phillips. Rick and Shammy even get to have an adventure that doesn’t involve a Magnum case. Their chopper is hijacked to an isolated island where bad guys had to dump a heavy load of drugs. It was actually nice to see Shammy be the hero and a case that didn’t have to piggyback on the main character.

Some other interesting events from the season include a guest star by Barny Miller star Max Gail as a dying vet who Magnum volunteers to visit through a charity. Jay Hernandez directs an episode that brings back his dead friend Nuzo, played by The Wire’s Domenick Lombardozzi. Some bodies turn up in a shallow grave from four years ago, and the prime suspect is Nuzo. Of course, he’s gone, but Magnum feels like he has to defend his friend’s name. The character returns as part of Magnum’s imagination. It’s my favorite episode of the season.

Jin, played by Bobby Lee, gets more episodes this season. He’s the show’s best comic relief character. This season he decides to do a business startup. He has a dog-walking app, and his first clients are “The Lads”, and when he feeds them chocolate because he just doesn’t know better, he takes them to a vet. It just so happens that the couple Magnum is chasing take hostages, wanting the vet to fix a bullet wound. It’s another top episode of the season.

You get all 20 episodes in this final CBS season along with some deleted scenes and a gag reel. This is likely my last opportunity to cover the show you our readers here. While CBS is very cooperative with critics, NBC is not cooperative at all, and it is doubtful they will be sending review copies now that they’ve taken over the series. They would suggest we go out and get it ourselves. “Don’t you think it might just be best to resist foolish impulses?”

Gino Sassani is a member of the Southeastern Film Critic's Association (SEFCA). He is a film and television critic based in Tampa, Florida. He's also the Senior Editor here at Upcomingdiscs. Gino started reviewing films in the early 1990's as a segment of his local television show Focus. He's an award-winning recording artist for Omega Records. Gino is currently working on his 8th album Merchants & Mercenaries. Gino took over Upcomingdiscs Dec 1, 2008. He works out of a home theater he calls The Reel World. Favorite films: The Godfather, The Godfather Part II, The Body Snatcher (Val Lewton film with Karloff and Lugosi, not the pod people film), Unforgiven, Gladiator, The Lion King, Jaws, Son Of Frankenstein, The Good, The Bad And The Ugly, and Monsters, Inc.
Vive L’Amour (Blu-Ray) A Force of One (Blu-ray)