Posted in: No Huddle by Brent Lorentson on September 19th, 2022 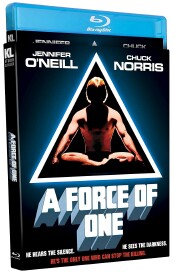 “Gentleman, I’d like you to meet Matt Logan. He’s a karate man.”

I still can’t decide if that line of dialog is awful or genius. In 1979 martial arts movies were going strong in the states, but they were certainly lacking in quality as compared to what was coming out overseas. Chuck Norris was the “American” answer to make a successful martial arts film, but it wasn’t till A Force of One where I feel Chuck Norris finally arrived as not just a martial arts star but a bonafide guy who was worth watching on the big screen. The story may be a bit farfetched, but this is a film that is fun. It’s something I’d throw on when I’m wanting to have a late night movie marathon. It’s what “midnight movies” were made for.

The film opens up with a pair of cops riding around when they spot a kid on a skateboard who they suspect is involved with drug dealing. They follow him around and discover the spot where he is picking up the drugs to make deals. Rather than call it in, the cops decide they want to find more evidence for themselves and decide to return to the location to gather more evidence. Bad idea, because waiting for them in the darkness is a martial arts master who kills the cops with ease. The bodies are then dumped in the San Diego bay.

Mandy Rust (Jennifer O’Neill) is on the homicide team put together to find who the cop killers are. Leading the team of detectives is Dunne, played by the recently deceased Clu Gulager, who may be best known for his role in 1985’s The Return of the Living Dead. Where the film gets absurd is when Mandy goes to Dunne and insists that the officers on the team learn martial arts to protect themselves. This introduces Matt Logan (Chuck Norris), who is actually a professional kickboxer who is actually training for a big match. This is sort of one of the first films that put two unlikely people together as a team to solve a murder, a trope that became huge in the 80’s. With this film the duo is O’Neil and Norris.  Thankfully the chemistry between the two works well enough that it doesn’t feel like a joke as we’re watching.

This is another film where Chuck Norris and Aaron Norris worked together on the fight choreography. Unlike Good Guys Wear Black, the fight scenes in A Force of One actually look pretty good and are fun to watch.  Don’t get me wrong; we’re not talking about Shaw Brothers quality fight scenes, but these are definitely an improvement from what came before in American films when dealing with martial arts. The story isn’t exactly top-notch, but at least director Paul Arron seems to have a better grasp on how to shoot an action film and how to utilize Norris to his full potential.

One of the best sequences comes in the third act when we see Logan go head to head with the killer with the martial arts skills. It’s a fight that as an audience we have been wanting to see from the moment we started watching the film, and surprisingly it really doesn’t disappoint. In an interview with the director that is on the disc, Aaron discusses the poor conditions the men had to shoot the scene in, and after hearing that I gained an even deeper respect for Norris.

While there are certainly better Chuck Norris films out there, this is one I still recommend.  This is one of the films where you get to see why Norris became the legend that he is today. Granted, when you watch it, keep in mind that this is a film that is pure 70’s and is just a notch above exploitation cinema. If you can appreciate that, then I feel this is a film you’ll have a good time with.

Brent Lorentson is a horror writer and film critic based out of Tampa, Florida. With a BA in Digital Film, he co-wrote and co-directed Scavenger Hunt. His short stories have appeared in various horror anthologies. In 2019 his short script Fertile Blood will be a part of the anthology horror film Slumber Party. He is currently working on his first novel A Dark and Secret Place set to be released in late 2019. Favorite Films: Taxi Driver, Fight Club, I Saw the Devil, The Wild Bunch, Dawn of the Dead, A Clockwork Orange, Pulp Fiction, Heathers, The Monster Squad, and High Fidelity.
Magnum P.I. : Season Four Good Guys Wear Black (Blu-ray)