Posted in: No Huddle by Jeremy Butler on September 21st, 2022 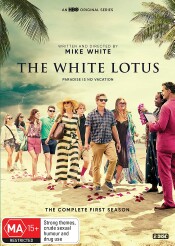 Now here is a series that me and my wife just didn’t seen eye to eye on. For her, the series was a triumph and had great depth. For me, it made me wonder whether we were watching the same thing. Because outside the beautiful scenery, I did not discern any great depth to this anthology series, which appeared to feature unhappy people. The series featured a cast of recognizable faces, which included Alexandra Daddario, Connie Britton, Steve Zahn, Sydney Sweeney, and Jennifer Coolidge; however, their characters weren’t what I would call loveable. It was difficult to find anyone pure or worth cheering for. Granted, the characters had varying degrees of sins, and none of them were what I would call evil, but none of them were worth investing in. Of course that is merely this humble critics opinion, as it would appear that many people have found something to love, given the series recent award success, such as two Critic’s Choice Awards and five Primetime Emmy Awards, including for Outstanding Limited or Anthology Series, Outstanding Directing for a Limited or Anthology Series, and Outstanding Writing for a Limited or Anthology Series or Movie. I guess this explains the series being granted a Season 2, which is scheduled to premiere in October 2022.

The series details a week in the life of vacationers as they relax and rejuvenate in paradise, or at least attempt to relax and rejuvenate. While these vacationers may appear to be picture perfect, it is shown almost immediately that each of them has hidden darker complexity. These complexity are not limited to the travelers, as members of the hotel’s cheerful staff, are also not as they appear. When I first heard about the series, I was anticipating a sinister turn, something to the effect that one of the patrons would be killed and everyone would be under suspicion. It’s a troupe that can become a bit of a cliché, but it is one that instills intrigue. While there is a death in the series, it does not fall under these conditions, and in all honesty, it is difficult to muster any sympathy for the character.

My own misgivings aside, the series is grounded in reality as the series appears to play on the adage that you can judge someone by the outside. Such as, with the idyllic vacationing couple played by Connie Britton and Steve Zahn. Zahn was a character that I initially felt sympathy for as he is seen struggle with something that has the potential to have significant ramifications for his life, as well as the life of his family. That situation is resolved early on, but as we get more familiar with the character, it is revealed that he committed sins that could have similar ramifications for his family. So it was out of one frying pan and in to another. Then there is the situation with his children, both kids are struggling to find themselves. The daughter’s situation is giving more focus it would seem, as she and her college friend deal with being from different worlds, which eventually breeds resentment. This subject is relatable, but what it resulted in was a bit anti-climatic. It wasn’t so much the act itself, but the lack of consequence that bother me. Despite this, this was probably the most interesting storyline in my opinion.

The subplot featuring Alexandra Daddario was probably my least favorite, as it dealt with her character essentially worried about becoming a trophy wife, which was exactly what was happening. Her husband in no uncertain words told her that he wanted her to stop working. Also her husband spent most of the time neglecting her, despite it being their honeymoon, in favor of trying to get even with the hotel manager, resulting in a tit-for-tat war between the two. To my mind, the dynamic between the husband, Shane, and the hotel manager, Armond, had more chemistry. I wanted to see Daddario’s character more assertive, the actress has previous played several strong characters, such as in the Percy Jackson franchise and in the cinematic adaptation of Baywatch. So playing this type of character just did not feel fitting to me. I was on board, when she finally stands up for himself but even that gets negated by the end.

Speaking of Shane and Armond, this dynamic did have its moments of entertainment. Mainly with watching the depths that the two would go to against one another. Then there is how it ended, which if I’m being honest because it was so over-the-top, that I had to laugh. Not to mention the idea that the other did not suffer any consequence as a result of the feud, is a bit too much to believe. Characters not suffering consequences for there actions appears to be a theme.

All and all, the series was not for me, but given that my wife found it appealing, I can expect that I would have to at least endure the next season of the series. I can only hope that the storylines will be more intriguing as it was not the cast’s performance that I didn’t enjoy, but that the storylines, while possessing moments of intrigue, did not resonate with me and I wasn’t able to identify with the characters. Here’s hoping that F. Murray Abraham, Theo James, Michael Imperioli, Haley Lu Richardson, and the returning Jennifer Coolidge can be more captivating.

Jeremy Butler is a film school graduate of the International Academy of Design and Technology. He is been writing for Upcomingdiscs since 2012; however, movies have played a big part of his life for much longer. Favorite genres include horror, science fiction/fantasy, and comedy. Favorite movies are V for Vendetta, Boondocks Saints, Kiss Kiss Bang Bang, and The Godfather.
Good Guys Wear Black (Blu-ray) Seal Team: Season Five