Posted in: No Huddle by Gino Sassani on September 21st, 2022 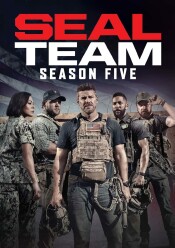 “So much for easing back into things.”

This season sports a huge change as the fifth season of SEAL Team hits DVD from CBS Home Entertainment. For the first four seasons the show has enjoyed a pretty well-rated run on CBS’s prime time schedule. Season 5 starts out exactly the same way until after the first four episodes. The series was switched suddenly from the television network to the Paramount + streaming service, and with the switch there are several huge changes. The first is in the number of episodes shot for each season. On CBS most shows run from 20-24 episodes a season. This year because of it being a hybrid year, you get 14 episodes. Starting next season you will get only 10 going forward. Another change is that the production values are going up, with a wider span of locations for the team’s missions. Finally, you will notice they can now do and say things they could not on network television. They make a pretty big deal of the first time they drop an F-bomb, and there are several as the season progresses. Mostly it’s good news, with the exception of the episode count. You can judge for yourself here in this hybrid season.

All David Boreanaz does is create iconic television characters. He has had no trouble getting work over the years. He has had the ability to jump from one successful series to another and enjoy longevity in those roles. Unlike many actors who have had big television roles, he doesn’t get at all pigeonholed or typecast. In Buffy The Vampire Slayer he originated the role of the vampire Angel, who spun off to his own series for several years. Immediately after that he took on the role of an FBI agent and partner to the title character on Bones. That job lasted a decade. Before the remains of Bones could be laid to rest, he was already working on his next new series. Now he’s the field leader of a Navy SEAL team, and he’s going to be dodging bullets and RPG’s for the foreseeable future. CBS has a big tradition of long-running shows, and I wouldn’t be surprised if a decade from now I’m talking to you about the 14th season of SEAL Team.

David Boreanaz plays Jason Hayes. Hayes is the field commander for a Tier 1 SEAL team coded Bravo Unit. These are guys who are always on call for covert ops missions. In the past the majority of their missions occurred in the Middle East hunting down terrorists. Now they could be called for anywhere in the world and at any time. This season the team spends a lot of time in Columbia and Africa. This season the miles are starting to weigh on his mind. Jason is starting to show the wear and tear. His brothers are picking up on the fact he’s forgetting important things, and he’s putting the team in danger and finally almost getting them killed.

Jason’s second in command is Ray Perry, played by Neil Brown Jr. Ray is finding it hard to care for his family and his brothers. Last season he was taken hostage and tortured, and now he’s suffering PTSD and has to work his way back to the team just in time to start looking out for Hayes and his possible Breacher’s Syndrome. Brown gets a lot to play this season. His character truly goes through the wringer, and we get to see this complicated issue throughout each of his relationships both on the team and at home. This might very well be Emmy stuff. It’s a truly masterful performance. It gets worse for Ray when he finds out someone has told the brass about his PTSD, and so he’s not sure he can trust his own brothers.

A.J. Buckley plays Sonny Quinn. He’s the contradiction and often humor of the team. While he’s the big muscle guy and a tough fighter, he also has a lot of phobias, which include spiders, water, and heights, which are often unavoidable, particularly for a guy who jumps out of airplanes for a living, sometimes in thick jungles. He’s a Texas man with a ton of pride. He had been secretly romancing Ensign (not lieutenant) Davis (Trucks). When they got close to getting caught, she breaks up with him, and it puts him in a bit of a depression. On his trip to Texas he hooks up with an old sweetheart, and they have a baby. This is Sonny’s best year as he also gets put through a lot. He goes overboard trying to be there for his child and wants very much to start a family, but when they leave to return to Texas he takes a nosedive and crosses some dangerous lines, almost getting others killed in the aftermath.

Davis is also having a big year. When she’s not on missions with the team, she’s taking classes that give her a new boyfriend and a chance to get noticed by the decision makers. The question is whether it will be a good thing or a bad thing.

One of the better stories of the others is Clay (Thieriot), who has been the POV of the show up until recently. He was the newbie back in Season 1, but that perspective has shifted back to Jason as the series has evolved. He has a father in high places who he attempts to distance himself from until his father comes back into his life with cancer and a desire to mend some fences. But now he’s married with his own baby on the way. When the child is born premature he promises to take leave and focus on his family until Bravo gets called on a top-secret mission. He’s the only one at first who knows about Jason’s issues and feels he has to go with Bravo to protect the team. That top secret mission is to North Korea to help get a potential defector out of the country.

“You should have set your flux capacitor to three minutes ago, Marty McFly.”

The episodes are action-packed, to be sure. The show’s ability to do battles on a television budget that look this good from week to week is pretty amazing. And now it’s only going to get better. There’s plenty of battle action with explosions and helicopters and all sorts of operations. Many of the shows are ripped directly from real headlines. You will absolutely recognize some of these stories. The episodes also take some time to look at the impact on the families of the team members and how they deal with this kind of lifestyle.

One of the better episodes has very little action. The entire unit is in the hospital recovering from a mission gone horribly wrong, and we discover it was because of Jason’s brain injury. The team isn’t used to sitting still to rest or recover, and they conduct a kind of Olympic Games of mayhem to see who can come up with the biggest prank. Another mission is good prep for the zombie apocalypse when the team is sent to a cemetery deep in gangland territory in South America to dig up a body so the lab guys can test it for radiation to try to figure out what kind of nuclear program might be being developed. The season ends with a cliffhanger that finds the team surrounded by superior firepower and being overrun.

You get all 14 episodes along with deleted scenes, a gag reel, and a feature on David Boreanaz directing an episode. There are short features on props and production design and the traditional season summary. The big changes for the series will ultimately be good for the fans. It’s a bit of a risk, to be sure. “If this mission isn’t executed to perfection, the consequences could be catastrophic.”

Gino Sassani is a member of the Southeastern Film Critic's Association (SEFCA). He is a film and television critic based in Tampa, Florida. He's also the Senior Editor here at Upcomingdiscs. Gino started reviewing films in the early 1990's as a segment of his local television show Focus. He's an award-winning recording artist for Omega Records. Gino is currently working on his 8th album Merchants & Mercenaries. Gino took over Upcomingdiscs Dec 1, 2008. He works out of a home theater he calls The Reel World. Favorite films: The Godfather, The Godfather Part II, The Body Snatcher (Val Lewton film with Karloff and Lugosi, not the pod people film), Unforgiven, Gladiator, The Lion King, Jaws, Son Of Frankenstein, The Good, The Bad And The Ugly, and Monsters, Inc.
The White Lotus : Season 1