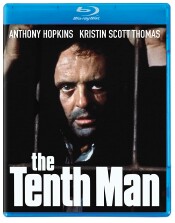 “If you’ve got the money you can do what you like. Buy another man’s life? Why not?”

There are few writers in the 20th century who have had the kind of career Graham Greene had. He was recruited by England’s secret service MI6 where his sister was also an agent and spent time around the world. These experiences likely helped him write the kinds of international thrillers that made him one o the most successful writers in the 20th century. His final novel went a little against the grain of his reputation. The Tenth Man doesn’t take us too far afield, and it’s far more of an intimate tale than he was known for. It would also be his final novel before his death in 1991. But he lived to see it filmed, albeit as a Hallmark Television made for TV film in 1988. But The Tenth Man was a little step above most of the films made for TV in that decade. It actually did play in theatres in Europe, mostly England. Now Kino Lorber has dusted off this 1988 gem and given it a chance at a new life, and it’s one of the better of the studio’s latest batch of titles.

The film begins in 1941 in Nazi-occupied France. Jean Louis Chavel (Hopkins) is a rather wealthy lawyer. The Nazi presence hasn’t really disrupted his life, and we watch him go about a pretty routine day. It’s routine until a Nazi routine collides with his own. He’s rounded up in a street raid where soldiers are really just looking for citizens who are held as a kind of hostage against bad behavior by the resistance. He placed in a prison with 29 other prisoners. He’s a bit befuddled that he should find himself in this mess, and it’s about to get much worse. The resistance made a few waves, and now it’s time to set an example. The prisoners learn they are to be decimated. Now that term has been pretty much bastardized over the years and today appears to mean nearly total devastation. In reality it was a Roman term used when a unit of the Roman Legions failed in a mission. They were lined up, and every tenth man was killed. So being decimated means only 10%. That’s what is announced here. There are 30 prisoners, so that means three must be executed, and the Germans don’t particularly care which three, so they leave it to the prisoners to decide among themselves. They decide to draw lots, and Chavel is one of the unfortunate ones.

Of course, he’s not to keen on the idea, so he makes an open offer that any man willing to take his place will be given his entire estate to leave to their loved ones. Michel Mangeot (Watson) volunteers for the deal. They go through the proper legal documents complete with witnesses, and while Chavel has a sudden attack of conscience, he can’t get Michel to back out of the deal. He has a mother and sister he wants to see provided for.

Three years later, the war is over and Chavel has survived his imprisonment. He’s physically beaten down and now completely poor. He sleeps on benches and digs for food from garbage cans. When he finds a gold ring on the ground, it brings him enough money to make his way back to his estate. He finds the place in shambles and rings for the new occupants. Michel’s sister Therese (Thomas) answers and appears annoyed that yet another beggar has come to their door. But she invites him in to be fed and eventually hires him to help her and her mother look after the grounds. Chavel gives a false name and tries to hide his feelings about being home and the current condition of the place. All the while it’s obvious from the wonderful performance that Chavel despises himself as much as she does him. Hopkins expresses this without saying a word, with just a look or a change in posture.

The middle part of the film finds Chavel getting closer to Therese but constantly listening to her hatred of Chavel because he let her brother die in his place. She’s been waiting for Chavel to return so that she can spit in his face and shoot him dead. Both parties are rather surprised one night when who should ring the bell. It’s a man claiming to be Chavel, and the real Chavel knows it can’t be, but goes along with the ruse. The imposter (Jacobi) is the son of one of the prisoners, and that’s how he knew the story about Chavel and the bargain. He’s running from the police, accused of murder and being a Nazi sympathizer during the occupation. When the real Chavel confronts him, he threatens to kill Therese if he reveals the secret. The imposter works his own way into her heart and begins to poison her about Chavel. The fascinating part is that it all turned on when her brother was executed. She had felt a pain one evening and was sure it was the moment her brother died. Chavel knows it was morning and tells her so. But the imposter plays on her feelings and tells her she was correct and being lied to. It all ends in a confrontation that gives Chavel a chance at redemption.

Just the appearance of Anthony Hopkins in the role of Chavel gives this television film a bit of an elevation over most like films of the time. The film was shot in France, so the locations provide rather wonderful production value on a television budget. The intimate nature of the story keeps the cast list down and the drama above the budget. Hopkins and Kristin Scott Thomas share wonderful chemistry, and the middle part of the film becomes more compelling than the higher action and drama of the film’s bookend acts. It’s a quiet film that plays well in the little nuances of the character, and Hopkins plays directly into that with subtle acting that doesn’t require his usual domination over a scene. It’s almost a counter-type for the actor, and it plays out quite beautifully throughout.

This one is absolutely worth your time. I suspect it’s not very well known unless you’re a Hopkins completest. But it deserves a second look, and this Blu-ray offers that opportunity. Put simply: “It’s good. It’s good.”

Gino Sassani is a member of the Southeastern Film Critic's Association (SEFCA). He is a film and television critic based in Tampa, Florida. He's also the Senior Editor here at Upcomingdiscs. Gino started reviewing films in the early 1990's as a segment of his local television show Focus. He's an award-winning recording artist for Omega Records. Gino is currently working on his 8th album Merchants & Mercenaries. Gino took over Upcomingdiscs Dec 1, 2008. He works out of a home theater he calls The Reel World. Favorite films: The Godfather, The Godfather Part II, The Body Snatcher (Val Lewton film with Karloff and Lugosi, not the pod people film), Unforgiven, Gladiator, The Lion King, Jaws, Son Of Frankenstein, The Good, The Bad And The Ugly, and Monsters, Inc.
The Adventures of Ozzie and Harriet: Seasons 3-6 Walker: Season Two