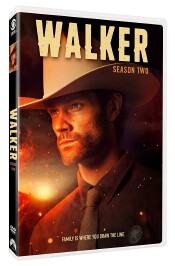 “I think this is just the beginning.”

Walker is out on DVD. No, this is not the next spin-off of the zombie Walking Dead franchise. There’s a new ranger in town, and his name is Cordell Walker. I know what you’re thinking: “Meet the new boss. Same as the old boss.” That’s where you’d be wrong. They might share the same name and job, but this Walker is nothing like the Chuck Norris version that lasted for over a decade when you include made-for-television movies. This Walker is much younger. He was a Marine who had joined after 9/11. He has a family. His wife was killed a year ago, and now he’s trying to raise his son and daughter with the help of his parents, who were no longer living in the Norris series. The episodes are more of an ongoing story arc, which conforms to pretty much most dramas on television today. While there were certainly elements that ran through the original show, it was pretty much a bad-guy-of-the-week setup. If you haven’t caught any of the new show, now is your chance. CBS Home Entertainment has released the entire second season on DVD.

Cordell Walker (Padalecki) is a Texas Ranger. A year before the first season his wife was murdered, and he was left with their two children and a lot of unanswered questions. When he couldn’t cope, he took on a long undercover operation that left his son August (Culley) and daughter Stella (Brinson) with his mother Abeline (Hagan) and father Bonham (Pileggi) and pretty much went underground for nearly a year. Now he’s back. His old partner Larry James (Bell) is now the new unit captain and his new boss. His brother Liam (Allen) has been his children’s father figure, and he’s partnered up with Micki Ramirez, played by Lindsey Morgan. She’s a newly-minted Ranger, having met him the night before when he was drunk and at the spot where his wife was killed.

It’s three months after the first season just like it has been in real time. Micki is deep undercover, and the new DA is a bit of a family complication for Walker. She’s a girlfriend from when he was still a kid and a member of the Anderson Clan who lived next door for years, but they have been feuding for decades. The feud goes back to the fact that the patriarch once wanted to marry Abeline and some of them blamed the Walkers, and Cordell particularly, for the barn fire that killed said patriarch back in the day. Lawsuits went the Walkers’ way, and the family moved away. But now they’re back, and Cordell’s old flame, Denise (Zaragoza) is now the DA.

The first few episodes of the season deal with Micki and her undercover operation, which leads to some trauma for the young Ranger. After the fifth episode she decides to hang up her spurs and move on, and that means Walker is going to need a new partner. He finds her in an ex-Ranger who is looking for her ex-partner who has been declared dead, but she’s sure he’s out there and in trouble. If any of this sounds familiar, it should if you saw the first season. This could have been pretty much Walker’s story. She thinks Walker is posing as a Ranger and kidnaps him and shoves him into her trunk. If that’s not a great first impression, I don’t know what is. Eventually she realizes he’s for real and works her partner’s case with Walker’s team. We find out she has good reason for her beliefs, but they don’t get solved until the last couple of episodes. In the meantime we have a feud to deal with.

As much as I kind of liked this feud story, it dominated the season to the exclusion of pretty much everything else. There really aren’t too many bad guys getting caught this season. There’s almost no law enforcement in the story outside of a bad guy named Serano (Wade) who gets popped and threatens Walker, but even that story ends up dovetailed into the Walker feud.

The discovery of an old Walker-branded lantern at the old barn brings about accusations that Bonham killed the man. Denise turns out to be a pretty bad person when she uses the office to try and bring down the Walkers. Liam also gets caught up in the feud and loses his own job by filing a false complaint to stop the car of Denise’s husband Dan (Annable). From surveillance cameras in the Walker home to a family secret about a surviving Davidson baby that the old Patriarch took to his grave, things continue to escalate. It ends up leading to a discovered land boundary dispute that leads to a horse race, winner takes all on both properties that ends up proving to Walker that no good deed goes unpunished. Finally there’s a little Romeo and Juliet when Walker’s daughter Stella falls for a Davison boy. There’s certainly enough drama to go around, but if you’re looking for crooks and big cases, this is not the show or the season to turn to.

It’s always a joy to see Mitch Pileggi in any role. I’ve loved him since his days on The X-Files and beyond. He’s a dynamic actor who doesn’t often get credit for his ability because of the type of shows he often appears in. I’m glad to see him get a part with so much meat in it. Walker’s dad is a very complicated man. He’s a fierce-patriarch kind of personality who will defend his family to his last breath. His relationship with Walker’s mother has been strained by an affair she was having for years. He’s also been hiding from his family that he has cancer. The original Walker didn’t have a living father. The character of CD, played by Noble Willingham, pretty much served as the father figure to the Norris version of the character. I really love this Pileggi character and hope he gets to ride it for a good many years.

You get all 20 episodes on five discs with just some deleted scenes and a gag reel for extras. Missing is the usual season roundup. I had hoped there would be one for Jensen Ackles, Jared’s Supernatural brother. Jensen came aboard and directed an episode with more than a couple call backs to the duo’s earlier show. The biggest is the appearance of Kansas at a state fair and playing Carry On Wayward Son, which was pretty much the theme song for Supernatural. There should have been an extra on this milestone episode. I hope to see Jensen maybe in front of the camera at some point. Hey, Leonard Nimoy visited Shatner’s T.J. Hooker for a guest role.

Once you get used to the fact that while they let you know in the credits it’s based on Walker: Texas Ranger, it’s really not. These characters and situations could not be more unalike. Norris had this force of personality that overcame his obvious shortcomings as an actor. Padalecki has a little of both for a more balanced character. But his past really works against him. At least it does for me. Sam Winchester was an iconic character who lasted over 15 years. We basically got to watch the actor grow up in that show, and it makes it hard not to see Sam sometimes when you’re looking at Walker. Not his fault, really, but it is certainly an issue for me. This was his dream job, and apparently he’s been pushing to revive this franchise and play Walker for years. He’s one of the showrunners and creators of the show, responsible for most of the show’s development from before it started. Hats off to him, and I look forward to the day when I only see Cordell Walker and no longer Sam Winchester. He’s a fine enough actor that I believe, given enough time, that day will come. The show makes a point of separating it from the original series with a slight modification of the title. “Don’t think about it.”

Gino Sassani is a member of the Southeastern Film Critic's Association (SEFCA). He is a film and television critic based in Tampa, Florida. He's also the Senior Editor here at Upcomingdiscs. Gino started reviewing films in the early 1990's as a segment of his local television show Focus. He's an award-winning recording artist for Omega Records. Gino is currently working on his 8th album Merchants & Mercenaries. Gino took over Upcomingdiscs Dec 1, 2008. He works out of a home theater he calls The Reel World. Favorite films: The Godfather, The Godfather Part II, The Body Snatcher (Val Lewton film with Karloff and Lugosi, not the pod people film), Unforgiven, Gladiator, The Lion King, Jaws, Son Of Frankenstein, The Good, The Bad And The Ugly, and Monsters, Inc.
The Tenth Man (Blu-ray) Superman & Lois: The Complete First Season (Blu-ray)