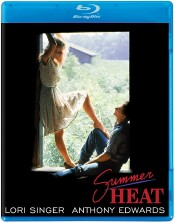 So this is not a movie that I would say aged well with time. However, if you could put yourself in the mindset of the time period of its release (1987), I could see the appeal. Lori Singer of Footloose fame and Anthony Edwards of ER fame star as married couple Roxy and Aaron Walston, whose life and relationship becomes strained in rural North Carolina in the post-depression late 1930s, when a young drifter named Jack Ruffin (Bruce Abbott, Re-Animator) comes to their tobacco farm to be a farmhand. Roxy, a shelter girl who married young and had a child is unable to resist the temptation that is Jack Ruffin. As expected, things do not end well. Based on a 1984 novel, Here to Get My Baby Out of Jail, the film shows the tragic results of the affair, which in this modern setting may appear cliché, but during that time likely would be engaging.

Singer narrates sections of the film, which I found to be a great addition and to provide context that would have been lost otherwise. Additionally, it strengthened its connection to the source material, as the novel from my understanding is from the perspective of Roxy. During these narrations, she speaks to her feelings about her life and towards Jack Ruffin. Their initial encounter is quite abrasive, as Roxy, who is very young and impressionable, seems intimidated by Ruffin, while he comes off as somewhat brash. In their first meeting, he just appears and offers her a drag on his cigarette while she is hanging clothes in the yard. Roxy visibly displays her discomfort regarding his presence by attempting to put space in between them. Despite this, Ruffin doesn’t hesitate to reach in and snatch a clothespin from off her robe to help her hang something on the clothesline. This set a good stage for what was to come, as it showed that for much of what would occur between them, Ruffin would be leading the charge.

Before long, Roxy and Ruffin both become engrossed in their affair; stealing moments together wherever possible, sometimes when her husband was just outside in the barn. I give credit for the boldness of the display. Passion is often depicted as a force that people get swept up in without any regard for consequence. This is shown very well in this film. To my mind, the best example of not considering the consequences resulted when her inattentiveness to her child resulted in a serious injury. This consequence was twofold for me, as it showed that nothing is harmless and served as the first indication to her husband that something was afoul. Granted, he still wasn’t exactly great on the uptake.

While I won’t give to many details away regarding the tragic circumstance that transpires, it isn’t very hard to figure it out. There is a clear obstacle standing in the lovers’ way, and in several moments we’ve observed Ruffin’s unhinged nature. 2 + 2 = 4 every time. I would have liked to have seen more passion during the explanation on the part of Roxy, who essentially takes it in stride. To be fair, that reaction can be chalked up to being in shock, but emotions should have been running high, and I would have at least like to have seen a screaming match over the ordeal. Also the fallout is all kind of matter-of-fact and straightforward; there are no surprises. As I said, if you are in the mindset of the time period of the film’s release, I understand. However, in this day and age, it comes off as stale and a waste of intrigue. Hence why I say the film in my opinion does not translate well to this day and age. Nevertheless, I do see the film being of intrigue to fans of classic cinema. It is easy to see how Summer Heat set the stage for future films about infidelity, such as Unfaithful and Addicted.

Jeremy Butler is a film school graduate of the International Academy of Design and Technology. He is been writing for Upcomingdiscs since 2012; however, movies have played a big part of his life for much longer. Favorite genres include horror, science fiction/fantasy, and comedy. Favorite movies are V for Vendetta, Boondocks Saints, Kiss Kiss Bang Bang, and The Godfather.
Electra Glide in Blue (Blu-Ray) Scream 2 (UHD Blu-ray) (4K)