Posted in: Disc Reviews by Michael Durr on October 12th, 2022 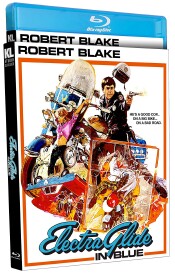 I am a big sucker for police procedural and detective shows.  Once upon a time, I religiously watched CSI (and CSI: Miami), and these days I am watching various episodes of true crime series like Real Detective and Homicide Hunter on a weekly basis (the only other thing I tend to watch weekly is wrestling).   It translates over to movies, naturally, as well.  Well, today’s film takes me into the world of a motorcycle cop who wishes to be a detective and then falls upon a murder case.  Sounds like a must-watch to me. Let’s take a look at Electra Glide in Blue.

We get a brief moment of static followed by a melody being played on a record player.  Someone loads a shotgun and then soaks his dentures.  Then a couple of pork chops go on the skillet.  As the pork chops cook, a string is tied to the shotgun and it is positioned to kill that same person.  We hear the gunshot and see the blood splatter across everything.  Then, when the dust clears, dinner is served, and someone is eating those chops.  Never let freshly made pork chops go to waste.  Cue that depressing music.

Jolene (played by Jeannine Riley) and Johnny Wintergreen (played by Robert Blake) wake up to a good morning.  A very good morning.  The two are extremely playful with each other, but eventually Jolene has to leave.  We then see Johnny train with weights, eat a couple of eggs raw, and then it is time for him to go to work.  John is a motorcycle cop, and he rides the Harley Electra Glide.

But Johnny doesn’t want to stay a motorcycle cop forever, and his desire is to go into detective work as soon as there is an opening.  The Sarge (played by Joe Samsil) berates the fellow motorcycle cops with a barrage of names as we pan across the group including Johnny, who we very much realize is much shorter than his fellow officers.  Then it’s time to hit the beat.  Johnny soon finds himself pulling over a couple for speeding.  He only finds out later that the driver is actually a detective from Los Angeles.  Still writes him a ticket.

The motorcycle cop then follows up with making sure that a trucker goes back to the right road even though he’s carrying quite the load.  But that doesn’t mean that Johnny can’t have a little fun as he sneaks up on a fellow cop named Zipper (played by Billy Green Bush), who he scares with a little pistol play.  We then see them take a little ice cream break as Johnny flirts with a couple of girls.

Zipper and Johnny decide to do patrol together and pull over a VW bus driver (played by Hawk Wolinski) and make him take out his entire cargo of posters.  It isn’t before long that Zipper decides to pull some shenanigans by planting drugs on the hippie driver.  Johnny walks away shaking his head.  Soon, we see Zipper rejoin Johnny as they continue to drive together.  They soon come upon ol’ Willie (played by Elisha Cook Jr.), who keeps shouting that Frank is dead.  Well, looks like Johnny might just become a detective after all.

One of the first things you notice in this film (outside of how wonderfully shot it is) is that they really go out of their way to tell a deep and moving story.  Robert Blake is exceptional here, and you have to wonder why he stuck to television so much when he shone in this film.  We also have the benefit of a wonderful cast of characters, from the ones already mentioned to also include Detective Harve Poole (played by Mitchell Ryan) and the coroner (played by Royal Dano) among others.  For those who are into monologues, there is one with the character Jolene that Jeannine Riley belts out of the park (but there are other good ones as well).

This film is nearly two hours in length, but honestly, it never overstays its welcome.  It could have even benefited from about twenty more minutes to stretch out a couple of sub plots that were seemingly dropped.  The only true problem I ended up having was the sudden and very abrupt ending to the film.  So much so that I didn’t dive into the extras like I traditionally did.  Instead, I festered for a day and came back to the extras.  It was only then through those special features that I realized the ending actually made sense.  I wasn’t sure I liked it, but the scene clicked, and my appreciation of the film significantly increased.

This movie is presented in a 2.35:1 widescreen format.  This is a wonderful 4K restoration job by the folks at Kino.  The cinematography that was done by Conrad L. Hall is on full display and highlighted here.  As you might already be aware, most of this film was shot without permits on the highways of Arizona.   It looks simply magnificent and would  only look slightly better in 4K, quite honestly.  The shots here are immaculate, and even when the scenery shifts to something indoors (or even at night), it holds up and keeps the viewer interested in the sights even when they aren’t interested in the movie.

Unfortunately, I did not have the original Shout Factory release in order to do a proper comparison, but suffice it to say I’m 100% sure that this is the superior release.  I will say that if they were going to fix a few things (and this is really minor), then perhaps they would see what they can do with some of the night time scenes.  But I would venture to say this is true of most films made before the mid-80’s where the dark is, well, the dark.

The sound to this film is presented in DTS HD 2.0 Master Audio in English with English subtitles.  While the audio is certainly serviceable, I did notice quite a bit of inconsistent audio where I had to keep audio levels at much higher than I usually do.  Then occasionally I would get a part of the scene that was too loud, and I had to fiddle with it again.  The dialog is fine, and the score, while loud, is certainly clear and doesn’t take over the movie (except when its supposed to as in the final frames).  Subtitles seem to be in line with the spoken words, and I didn’t notice any issues with any of the environment or surrounding sounds.

Commentary with Screenwriter Robert Boris, moderated by Film Historian Alex Van Dyne : This is a new commentary for the disc.  Robert goes over his screenplay and the very slight differences from his written work to the screen.  This helps fill in a lot of the tidbits about how this was written and the choices he made, especially with respect to the ending, which I won’t spoil here.  There is a second moderator here that pops up, but for the life of me I couldn’t make out the name correctly (and it doesn’t come up in my research), Jana Bilo (sp?).

Commentary with Composer/Producer/Director James William Guercio :  The better of the two commentaries, this one came from past disc releases, and James goes over just about every facet of the movie.  Also, this one doesn’t have quite as many dead spots as the Boris one did.  He talks about the choices he made and how even though he only made a $1 from this film, he got exactly what we wanted from it in the end.  I also enjoyed his “real talk” about mentioning our fine boys in blue and the many risks they take on daily.  And just for the record, I would have fully supported his idea for a sequel.

Interview with Actor Mitchell Ryan 9:47:  One of the two new interviews, we get to meet with Detective Harve Poole as he talks about his character and then also spends time talking about the other personalities in the film.  He closes out the interview by mentioning the locations and the film’s cult status.

Interview with Screenwriter Robert Boris 13:44: Oddly enough, I probably liked this feature the best out of the whole disc.  While I felt that the commentary was a bit long-winded, this was a nice concise piece and hit all of the notes about how Robert wrote the script and where he drew his inspiration from (since the film is something of a “based on true events”).  Of particular interest is one part where he mentions that there was this whole subplot he wrote involving a love interest between Wintergreen and one of the girls from the hippie commune.  Too bad it never made it to print; I think it could have significantly strengthened the film.

Introduction by James William Guercio 9:36: In this final spot, the director talks about how to he grew up and the story that happened in Phoenix, AZ that was basis of this story.  He talks about how he shot the film in under a million dollar budget.  In something I love, he explains that Nick Nolte was an uncredited part in the film and it was one of the first roles for this Hollywood legend.

Theatrical Trailer, Tv Spots, and Radio Spots for Electra Glide in Blue:  There are also trailers for Busting, Thunderbolt and Lightfoot, Taking of Pelham One, Two, Three; Mr. Majestyk, and Gator.

Electra Glide in Blue never had much commercial success.  It did, however, get nominated for a Golden Globe (Robert Blake as Best Actor) and years later has enjoyed a cult following.  I admit I had never even heard of the title until I saw it in my review pile.  However, much like other films I’ve found in my adult life of yesteryear, this one holds a lot of charm and is something I am sure I will be returning to in years to come.  The characters are fun, and even though it’s a little depressing by the end credits, it still is shot so darn well and provides a wonderful story from beginning to “Tell Me.”

This disc is a real standout.  It has fantastic video and a very full plate of extras.  I am confused why when Kino has produced some great 4K’s like Misery and Mad Max, it didn’t decide to go that extra mile with this film (the restoration was right there, after all).  I’m sure it had to do with commercial reasons, but nevertheless this release gets a very high recommendation from yours truly.  If you like a little detective work with your action films and some of the most beautiful cinematography that you will ever find, you have to check this one out.  Enjoy.

Michael Durr has been reviewing movies for the better part of fifteen years now. He primarily enjoys thrillers, sci-fi, animation and even a little courtroom drama. His favorite films include Escape from New York, the Goonies and anything with Alyssa Milano. When he’s not praising Kurt Russell as the greatest actor of our time or scratching his head over a David Lynch flick, he’s spending time at home in Texas with his lovely wife, Lori and his amazing son. How they put up with him is a mystery, but even Basil Rathbone doesn’t have the time to solve that one.
Superman & Lois: The Complete First Season (Blu-ray) Summer Heat (Blu-ray)