Posted in: The Reel World by Brent Lorentson on October 15th, 2022 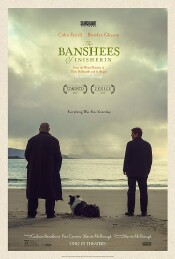 As I mentioned in my review for Amsterdam, it’s awards season, and the studios are churning out the films they hope will garner praise and a lot of statues celebrating how great their film is. Spoiler alert, Amsterdam won’t be one of those films, but one that will be is a film that is easily one of the top films I’ve seen this year, and it’s The Banshees of Inisherin.  Because of the title I know many have been put off from watching the film because they think it is going to be a horror film. Well, let me assure you that this isn’t a horror film, nor are there any banshees in the film. As to why the film is called that, well, you’ll have to see it to find out for yourself.

This is the first film writer and director Martin McDonagh has done since his critically acclaimed film Three Billboards Outside Ebbing, Missouri (2017), and as great as that film was, I feel he’s managed to outdo himself with The Banshees of Inisherin. Though the film may be simple in plot, the characters he’s crafted for this story are so well done that every scene they populate they are engaging. The dialog is sharp, and the actors deliver some of the years best performances that just makes this such an enjoyable experience to watch.

Padraic (Colin Farrell) is a simple man, content with his simple life, living on the Isle of Inisherin with his sister, Siobhan (Kerry Condon).  Pretty much everyone on the island lives a quiet and simple life that revolves around routine, so much so that at 2 o’clock every afternoon Padraic meets with his best friend, Colm (Brendan Gleeson) at the pub to share a pint, only today Colm decides not to. Colm has decided that he no longer wants to be friends with Padraic. As you would expect, Padraic wants to know why his best friend would suddenly wake up and have these feelings, and when we get the answer it seems trivial enough that Padraic continues to hound Colm for answers to the point that Colm gives him the ultimatum that if Padraic speaks to him again he’s going to cut off one of his own fingers and continue to do so till Padraic finally stops talking to him or he runs out of fingers.  It seems like an extreme threat, and because Colm wants to spend his time creating music and playing his fiddle, it seems the threat will only harm Colm in the process, so just how serious is Colm?

Really, is that all the film is about? Mostly yes, but it’s a story that explores friendship and the impacts it has when two dear friends go their separate ways and frankly how it can be more emotionally damaging than a breakup.  But there is a deeper question that gets posed in the film that I’m sure will give viewers plenty to chew on long after the credits end …What’s more important, being nice and the “pointless” conversations you have with friends over drinks or creating music, writing, or art? It’s a question that is for the individual to decide for themselves, and how it is posed in the film and how Colm and Padraic have their own answers, you can understand why both are right.

The other relationships Padraic has in the film of course help the narrative.  Every exchange Padraic has with his sister Siobhan is entertaining, the wit in McDonagh’s dialog just shines when Condon speaks her lines.  I really loved the Siobhan character, and if Condon doesn’t get some Best Supporting Actress attention it will truly be a crime. Honestly, the entire cast is phenomenal in this film, even in the scenes where there is no dialog the performances are so good. Just the amount of emotion Gleeson and Farrell can convey in a simple look or in how they walk, literally this is an actors’ showcase (this is right up there with the performances of the two leads in Decision to Leave). Then there is the relationship Padraic has with Dominic (Barry Keoghan), a dim young boy on the island who we can picture becoming Padraic’s drinking buddy if he doesn’t patch things up with Colm. Dominic is unfortunately a biproduct of having an abusive father who happens to be the town’s sheriff, though the old man is terrible at his job and seems to have some sort of vendetta against Padraic. And all this is happening as the civil war is taking place across the harbor. It works as a good visual metaphor, of which the film has plenty.

Then there is the beautiful cinematography from Ben Davis (Cry Macho, Three Billboards Outside Ebbing, Missouri, and Doctor Strange). Though he has an impressive filmography, this might be the one that gets him a lot of attention.  The way he captures the beauty and gloom of the Irish isle is stunning; just about every shot looks like it could be a postcard. It also has a bit of a timeless look to it. Sure, it’s not in today’s times, but just the look of the film and its subject matter give it a feeling that this film won’t age.  I’m also a fan of the music: plenty of Irish folk songs, and there is even a tune that Brendan Gleeson composed himself.

There is a lot to love and enjoy about this film.  I can easily say this is my favorite performance by Collin Farrell, and it’s a film I’m looking forward to seeing again. This is definitely in my top three films of the year so far, right along side Decision to Leave and Bones and All. Sure, there are still plenty of films to come out in the upcoming months, but I don’t see my appreciation of this film wavering.  There is so much heart and sadness in this film, but damn, it is also fun to watch and experience.

Brent Lorentson is a horror writer and film critic based out of Tampa, Florida. With a BA in Digital Film, he co-wrote and co-directed Scavenger Hunt. His short stories have appeared in various horror anthologies. In 2019 his short script Fertile Blood will be a part of the anthology horror film Slumber Party. He is currently working on his first novel A Dark and Secret Place set to be released in late 2019. Favorite Films: Taxi Driver, Fight Club, I Saw the Devil, The Wild Bunch, Dawn of the Dead, A Clockwork Orange, Pulp Fiction, Heathers, The Monster Squad, and High Fidelity.
Halloween Ends Poltergeist (UHD Blu-Ray) (4k)