Posted in: Disc Reviews by Michael Durr on October 17th, 2022 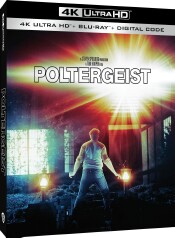 1982.  I was seven years old, and my mother, who loved horror movies, wanted to take me to see Poltergeist.  Unfortunately, around this time, my dad was usually on the road, and so there was no one really there to say maybe we shouldn’t.  Honestly, even if my father was there and did say no, I doubt my mom would have listened.  It was PG; how bad could it be? In the next two hours, I was treated to something that resonates with me to this very day. From the moment I heard “They’re Here”, I knew I would never see static on televisions the same way.

Please note that parts of this review are borrowed (story, critique, special features) from the 2007 DVD review I did 15 years ago.  However, where possible I am enhancing what I wrote, as I think I write better these days. Maybe I have lost a touch of my creativity, but that’s a story for another day.

It’s 3:00 in the morning, the national anthem is playing, and then the television goes to static (remember those days? now we just get infomercials about losing weight). A small child named Carol Anne (played by Heather O’ Rourke) gets out of bed and walks towards the television. She starts talking to the set and works up a pretty good conversation. The people inside the television were trying to communicate with the 5-year-old child. However, there was something else in the television set, something far more sinister. There was more at work here than a girl perhaps making an imaginary friend.

The Freeling family seems normal. Steve (played by Craig T. Nelson) is a real estate agent and is responsible for 42% of the area’s sales. Diane (played by Jo Beth Williams) is a stay-at-home mom with three wonderful kids: Dana (played by Dominique Dunne), Robbie(played by Oliver Robins) and of course, Carol Anne. Then things start happening. More than your standard talking to your television set. Trees seem to come alive, and dolls with clown faces seem to haunt their dreams. Diane notices furniture where it shouldn’t be. From there it’s a spiral staircase heading down into a deep and dark story where they fight for their children and for their sanity.

As I revisited this classic I have probably watched about a dozen times (or more), I thought I would share a few observations on scenes or camera shots.  Like I’m still wishing for the static to slowly turn into late-night Cinemax even just for a brief second, because why else would the television be on that late at night?   Sadly there are twenty-year-olds who don’t get that joke.  Also, that dog has it made.  Seriously, he gets to eat everything, because the Freeling family have to be the biggest bunch of slobs and literally sleep with their potato chips.

Also, has anyone caught on that Carol Anne is autistic? (My son is autistic, so to find this in classic cinema interests me.)  Whether Heather O’Rourke was is another matter, but the character barely talks, uses few words, finds comfort in inanimate objects, has conversations with herself, and has heightened sensory needs.  There is a reason that Robbie sleeps in the same room (protection),  because their mother and father are too busy sneaking in a few doobies before crashing on to the other side.  Heck, it doesn’t even bother the mother Diane that the people they hired to put in a pool are catcalling after their 16-year-old daughter, Dana.  And why does Dana know about the Holiday Inn, anyway?

Finally, if you knew that your neighbor’s remote could control your television as well, wouldn’t you, I don’t know, move your television? (The neighbor even makes this remark.)   I can get away from the angle to replace it with a different brand, because televisions were very expensive in the first part of the 80’s (I remember, because my parents had this 25-inch with the carpentry and everything that we had FOR YEARS and was actually fixed at least half a dozen times.  I mean, like handyman fixed, not knocking-it-on-the-side-with-your-hand fixed.  (Though we did that too.)  But how tied up in yourself do you have to be to not move it after the first time this incident happened?

Anyway, Poltergeist works on so many levels. First, it strikes you as a family drama and then descends immediately into a suspenseful film once the action picks up. It even dives a little bit into a horror film but without the hooks or teenagers getting slashed. However, it always keeps the suspense, even into the final scenes. Then the final scene it becomes a family drama again before coming to the conclusion (and two more sequels would soon follow). The acting is solid all the way around, and even though it was about ghosts and certain events were strengthened for the camera, it almost felt like this could happen to you. It took something so tranquil and turned it into a great movie. This movie will always be a strong movie because of the wonderful way it built its foundation.

The video is in 2.35:1 widescreen in HEVC / H.265 with a native 4k presentation. The disc runs about 58.90 mpbs on average(BD-66 disc).  The detail is certainly impressive, and one really starts to marvel at how good they made the special effects.  Warner Bros did a wonderful job to enhance, but at the same time stop short of exposing certain elements.  We all know that even though this was a “Tobe Hooper” directed film, it was really Steven Spielberg’s baby.   That fact comes out more obviously in the additional detail from the 4K master.  Such care was shown, and the detail in so many shots breathes such more life into this amazing film.

The rooms of the Freeling house are now very distinct, and the closeup on people’s faces as well as random things like doorknobs have more striking detail than ever before.  Pausing the film and being able to point out tidbits that were muddled in past versions is very easy here.  If there is any shot that is still soft, it’s either the fault of the source material or done on purpose to hide a flaw that was necessary for a special effect.  This is a marvelous job, and as far as live action goes the best restoration I have seen this year in the 4K format.

Audio is provided in so many choices that it will make your head spin (wait, that’s another movie). For English, we get a DTS HD 5.1 (Remix) and 2.0(Original) master tracks.  Additional languages include French, Italian, German, and Spanish (Castellano and Latino).  Subtitles are provided in English, French, Spanish (Castellano and Latino), German, Italian, Nederlands, Dansk, Suomi, Norsk, and Svenska.

They kick it up a notch here too, and to me it’s not a simple port of the old TrueHD 5.1 track found on the Blu-ray.  It has emphasis and makes all of the important supernatural elements that much more imposing.  I seriously thought I might wake up my neighbors from the bone-chilling sounds and escalating tension music, but thankfully that was not the case.  For example, all of the corpses will scare you again even if you have watched it as many times as I have.  That’s how good the sound is.  Dialog does not suffer here, and subtitles seem to be on point.  The original mix is also provided, which should be a bonus to the purists out there.

Until the day I switch over into the next life, I will always have fond memories of Poltergeist. It works for me even today and takes me back to a childhood where I can’t sleep with a television going or even having a window where I can see outside. I am still terrified by clowns (however, I blame Stephen King more for this) and am suspicious of trees that have lost their leaves. The amazing thing about this movie is that it is PG. When I was seven years old, it probably seemed like an innocent scary movie for parents to take their children to. But with displays of ghosts, demons, skulls, and corpses along with the occasional drug use (this means you, JoBeth), you start wondering what the MPAA was on.

The video is amazing, a truly stellar presentation, and the audio is excellent as well.  The extras are still lacking several releases later, but I can’t imagine with some of the things that happened to the original cast, that everybody wants to jump right in and relive their experience.  So for that, I will give the special features a rare pass.  Easy recommendation even if you have never seen the film; this is what a classic eighties horror movie is all about.  Even though I was scared for a month after I saw this film, it was a wonderful memory that I shared with my mom.  I miss her.  Enjoy.

Michael Durr has been reviewing movies for the better part of fifteen years now. He primarily enjoys thrillers, sci-fi, animation and even a little courtroom drama. His favorite films include Escape from New York, the Goonies and anything with Alyssa Milano. When he’s not praising Kurt Russell as the greatest actor of our time or scratching his head over a David Lynch flick, he’s spending time at home in Texas with his lovely wife, Lori and his amazing son. How they put up with him is a mystery, but even Basil Rathbone doesn’t have the time to solve that one.
The Banshees of Inisherin Star Trek: Picard – Season Two (Blu-ray)