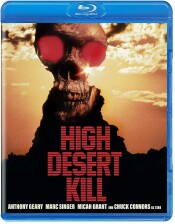 “We came up here to get lucky.”

What do you get when you combine Predator with The Twilight Zone and throw in an 80’s television star and do a movie of the week? You get High Desert Kill and a preview of the kind of thing that would start appearing on Sy-Fy in a few decades. Universal was actually the king of these kinds of films throughout the late 70’s and 80’s, and director Harry Falk was one of television’s steady directors of the time. There’s real experience here that allows this film to at times rise above its limited budget and offer a few compelling moments. There was actually a time the film was considered for theatrical release and did find a few box office dates in Europe. That was the dilemma in the 80’s. Made-for-television would eventually give way to direct-to-video, and today, of course, it is streaming that provides the same kind of outlet. Thanks to Kino-Lorber you get a chance to decide for yourself as High Desert Kill arrives on Blu-ray, albeit with no real restoration. It’s pretty much as it was when it was released on television in 1989.

Dr. Jim Cole (Geary) is a research scientist. Brad Mueller (Singer) owns a chain of gyms and considers himself a macho guy. Together with their friend Paul (Armstrong), they spend one weekend a year together out in the badlands of New Mexico where they camp and hunt. It’s going to be different this year, because Paul recently died when his car brought down an electrical wire and he’s electrocuted. Jim’s wife has a bad feeling about his plans to do the trip anyway with Brad and Paul’s nephew Ray (Grant). Ray is a high fashion male model and not the kind of a guy who might be at home roughing it in the desert. Jim’s wife has a bad feeling about the whole thing. She’s not in the film again, but she serves the purpose of warning the leads … and the audience that bad things are coming. She’s Crazy Ralph. Ray gets them Paul’s old rustic Jeep, and the three head out for fun and games. Of course, we already know Jim’s wife is right, because we were treated to a scene of a Native American warrior who appears to turn on his chief while some entity waits just outside.

So the three arrive, and the first encounter they have is with an old camper named Stan, played by an aging Chuck Connors. He tells them there isn’t any game to be found this year. Apparently something has scared off the animals. Again there’s a wink at us, letting us know this is some serious stuff going on. Stan joins up with the three weekend warriors, and then they come upon another camp. This time we find two girls named Kathleen (Mansy) and Terry (Birdsong). Of course, the guys are hitting on them, but they’re not interested and return the flirtations with icy cold shoulders. So they move on to set up their own camp ,and later that night the girls come looking for them, except this time they’re loose and too ready to party. Certainly, no one stops to question the strange change in behavior, and the six of them have a wild night together. From there things just get weird, if you can believe it hasn’t really gotten weird yet.

A guy who looks like Paul shows up to watch the odd things going on. The guys do manage to find a bear and start eating the raw liver. It’s as if they’ve come upon a strange drug. We get about a half hour of almost psychedelic behavior with a plot line that gets really hard to follow. It all leads to a realization that they are rats like the ones Jim uses in his experiments. Aliens have manipulated their emotions and are studying the results. This is where Predator turns into The Twilight Zone.

There are some truly thrilling moments in the film, and the acting is above average for this sort of thing. Marc Singer made a career out of these kinds of films and television shows, and he’s pretty much spot-on casting. Falk also manages to get some extra production bang for his buck with the natural New Mexico locations. It’s a pretty effective atmosphere and less used than the old ‘cabin in the woods” environments. The film gets bogged down with some of the crazy behavior, and I really started to lose track and focus about what was going on. Somehow I suspect this is one of those films many of you out there find much better if viewed stoned. That’s not my thing, so I had a hard time with that middle act.

The film is offered in its full frame (4×4) aspect ratio, or you can opt for a 1.78:1 version, which is just the full frame presentation but zoomed in. I honestly didn’t find one superior over the other. It’s the kind of film that might be worth a first look, but I can’t imagine it standing up to repeat viewings. It’s like a bad nightmare you try to shrug off. “Maybe in a couple of weeks, I can dream of something else.”

Gino Sassani is a member of the Southeastern Film Critic's Association (SEFCA). He is a film and television critic based in Tampa, Florida. He's also the Senior Editor here at Upcomingdiscs. Gino started reviewing films in the early 1990's as a segment of his local television show Focus. He's an award-winning recording artist for Omega Records. Gino is currently working on his 8th album Merchants & Mercenaries. Gino took over Upcomingdiscs Dec 1, 2008. He works out of a home theater he calls The Reel World. Favorite films: The Godfather, The Godfather Part II, The Body Snatcher (Val Lewton film with Karloff and Lugosi, not the pod people film), Unforgiven, Gladiator, The Lion King, Jaws, Son Of Frankenstein, The Good, The Bad And The Ugly, and Monsters, Inc.
Star Trek: Picard – Season Two (Blu-ray) The Trials of Oscar Wilde (Blu-ray)