The Trials of Oscar Wilde (Blu-ray) 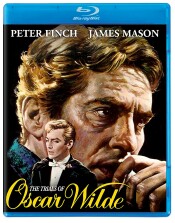 “I realize that much of your extravagant behavior is done purely for effect. You’re an artist. The public expects you to be different. But you’re no longer an ascetic young poet just down from Oxford. You’re a highly successful playwright at the peak of your career. You dine with royalty. You mix in the highest social circles. You’re walking along a precipice. Just as long as you continue to play court jester, society will accept it. But tax their tolerance too far and they’ll send you crashing from the heights to the depths of obscurity. A halo doesn’t have to fall very far to become a noose.”

That’s the kind of advice we might expect to go out to some of our more, shall we say, eccentric celebrities of the day. In modern society we still revel in the odd choices and actions of our actors, musicians, and athletes. But sometimes they cross a line, and there’s a backlash. Just take a look at the careers of Ezra Miller or Armie Hammer. There are still sacred cows, and they often change from year to year, decade to decade, and century to century. In the times of iconic playwright Oscar Wilde, it was homosexuality. In fact it took the United Kingdom to the 1960’s to reverse laws prohibiting the lifestyle. But even in Oscar Wilde’s time there was a certain ability to look the other way when one was so entertaining. But Wilde made the mistake of having his cake while eating it too, and it led to the downfall of one of the best playwrights in modern history.

Peter Finch plays Wilde at the height of his triumph. He’s celebrating another big hit when we learn there is one in the crowd who is not in love with the playwright. He’s The Marquis of Queensberry, played by Lionel Jeffries. It appears his son Lord Alfred Douglass (Fraser) has been a companion to Wilde and he suspects it goes beyond just being a member of his extensive entourage. Of course, Wilde doesn’t take these questions seriously. He’s famous for his one-liner replies that kind of made him the Yogi Berra of his time. The Marquis is not amused and promises action if the situation is not rectified. As it turns out, Lord Alfred or better known to Wilde and his friends, Bozzie, has been with Wilde often. To his discredit, he’s a bit of a leech, using Wilde to pay for his lavish lifestyle and even gambling debt. Wilde’s actually getting weary of the relationship and begins to suffer declining health even as creditors are after him. He decides to go away and write because he needs another hit to get him solvent again. Even in seclusion, Lord Alfred shows his selfishness. Meanwhile Wilde’s wife Constance (Mitchell) is left to care for the children and the affairs of the home. She’s surprisingly tolerant of his flings, but even she is tired of Bozzie’s effect on her husband.

“I can’t tell you what it was like. To have a woman come between you and your husband, that’s something a wife can understand. But another man?”

It all comes to a head when the Marquis leaves a card at Wilde’s hotel accusing him of appearing a sodomite. Wilde decides to sue to libel even has his own lawyer and friends plead for him not to file the suit. Bozzie pushes him to do it to spite his father, but Wilde would have been best to follow the lawyer’s advice. The only way the Marquis could win would be to prove the accusation as the truth. And that’s what happens, but it doesn’t end with the loss of the lawsuit. Now his illegal activities can no longer be simply ignored. Criminal charges are brought, and Wilde ends up going to prison for his lifestyle. It costs him his riches and his family.

“I adore scandal about other people. But about myself? I find it extremely dull. It has no charm or novelty about it.”

The film has a pretty crazy history all its own. It was based on a novel by Montgomery Hyde and a play by John Furnell. There was also another Oscar Wilde film in production at the same time, and there was a race to get to the box office first. That film featured Robert Marley as Oscar Wilde. The rights to this material were obtained by Albert Broccoli, better known as Cubby in the industry. He formed a company with the intent to make this film and build his own production company with the profits. But Cubby had a difficult time getting financing. The nature of the material in 1960 was still something in which to be cautious. There was a chance the film will be restricted in its release and make it hard to get any money out of the deal. It didn’t help that there was another film coming out as well. The film did poorly, and the company failed. But that wouldn’t be the last we’d hear from Cubby Broccoli.

An interesting note on The Trials Of Oscar Wilde was the inclusion of an actor named Ian Fleming. That’s also the name of the famous writer who created James Bond. The actor is no relation to the author, but as luck would have it Cubby’s next move was to approach the writer and obtain the rights for Bond. Cubby formed Eon Productions, and the Bond franchise has become one of the most profitable box office champions in movie history. Eon Productions still exists, run by Cubby’s daughter and her husband.  Who knows, did seeing the actor’s name inspire Cubby to go after the Bond rights? It’s strange that that would be the most significant contribution of this film.

The film tries to stay away from its own subject matter. We never do see Wilde engage in any sexual activities of any kind, and he continues to deny the accusations until evidence in court makes the denials an exercise in futility. It’s also odd that the relationship itself was not one that Wilde truly embraced or benefited from. A film made today would certainly have the ability to be more direct and make the subject matter more a part of the narrative. It’s really just a McGuffin here, and not a satisfying one at that.

The film stands or fails on the performance of Peter Finch, who I think captures his subject rather grandly. It’s unfortunate the film didn’t really reach a large audience. It’s a wonderful performance, and the actor is soon lost in the character. It’s a bit ironic that many of the themes of celebrity and scandal ring so true today. This seems like the perfect time to revisit this film, and thanks to Kino-Lorber you can, and I suggest you give it a go. “I should think the answer to be rather obvious, don’t you?”

Gino Sassani is a member of the Southeastern Film Critic's Association (SEFCA). He is a film and television critic based in Tampa, Florida. He's also the Senior Editor here at Upcomingdiscs. Gino started reviewing films in the early 1990's as a segment of his local television show Focus. He's an award-winning recording artist for Omega Records. Gino is currently working on his 8th album Merchants & Mercenaries. Gino took over Upcomingdiscs Dec 1, 2008. He works out of a home theater he calls The Reel World. Favorite films: The Godfather, The Godfather Part II, The Body Snatcher (Val Lewton film with Karloff and Lugosi, not the pod people film), Unforgiven, Gladiator, The Lion King, Jaws, Son Of Frankenstein, The Good, The Bad And The Ugly, and Monsters, Inc.
High Desert Kill (Blu-ray) The Lost Boys (UHD Blu-ray) (4K)