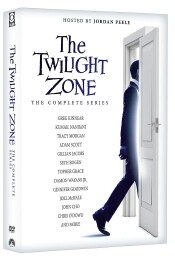 Next year we hope to return to our usual 31 Nights Of Terror. This year we are going to offer you some Halloween Spotlight titles that would be a great idea to pick up for the scary season. So… we’re still your October Night Mayor and here’s a great idea for Halloween from our friends at Paramount/CBS/Showtime.

“You’re traveling through another dimension. A dimension not only of sight and sound, but of the mind. It is the middle ground between light and shadow, between science and superstition. And it lies between the pit of one’s fears and the summit of one’s knowledge. You are now traveling through a dimension of imagination. You’ve just crossed over into The Twilight Zone.”

It would be very hard, indeed, to argue against the impact that The Twilight Zone has had on television. To say that the series was a milestone in that medium would be an understatement of the worst kind. When Rod Serling brought his landmark series to CBS in October of 1959, television was still very new. No one was quite sure what the future held for that magical box. But that box was part of an invasion. The television set would change the face of the world. It would become the social center of our homes. It would influence who we choose as our leaders. In 1959 those fortunate enough to already have television sets in their homes would become the first to see that future. They were given a glimpse of what life might or would be. It was a gift that has continued giving 50 years later. The franchise has been tackled often since Rod Serling’s original. There was the ill-fated anthology film where different directors delivered takes on different stories that was overshadowed by a tragic helicopter crash that killed two Vietnamese actors and veteran actor Vic Morrow. Two years later the series returned to television with a surprisingly solid two years. In 2002 there was yet another very brief television effort. Now the show returns in the world of streaming from CBS’s All Access network. Unfortunately, it might just be the least of the franchise’s incarnations.

CBS has released both seasons of the now finished series in a complete season set. You get all 20 episodes on seven discs with all of the extras from the original releases intact.

Taking over the narrator duties for this new version of The Twilight Zone is Jordan Peele. I was immediately excited when I heard he would be heading the project. He is one of the more brilliant horror filmmakers working in the last 20 years or more. He was the perfect guide through the iconic waters of The Twilight Zone. Imagine my disappointment in not only the new series but in his performance as the narrator/host. I’m not certain if it is some kind of conscious choice or just his take on the material, but he’s incredibly wooden in the role. His voice lacks any of the wonderful inflection that made Serling so great. It’s always so obvious that he’s reading, and when he gets to that “in the Twilight Zone” moment, he appears to fall completely flat. It’s such a huge disconnect from what I expected from him. In the various incarnations of the show we’ve had Burgess Meredith and Forest Whitaker take on these roles. Peele’s performance falls dead last in the group.

The first episode might feel a little familiar. In fact one of my biggest complaints is that all of this feels too familiar. But the first episode, entitled The Comedian stars Kumail Nanjiani as a struggling comedian who can’t seem to get a laugh. When he meets one of his idols at the bar, he’s given a power to change that with a warning that once you give something to the audience, it’s gone. It turns into the literal truth. All he has to do is talk about someone he knows and he gets gangbusters laughs. But the catch is they disappear from reality. They were never born, and no one else but him remembers them. Now this is a common kind of story in these supernatural anthologies. Someone makes a deal with some kind of “devil”, and the ramifications are always more than they expected. The original show did many of these. But what makes it almost too familiar is that Nanjiani just did a wonderful film that had to do with a struggling artist who can’t seem to get folks to like his material until a supernatural event wipes out The Beatles for everyone but him. A little too close, and this version isn’t near as compelling or clever as the film Yesterday.

That would be fine, except almost every episode calls back a classic episode. But this time the show doesn’t just deliver a social message, it bangs you over the head with it. Episodes take on many of the “woke” crowd’s issues and preach from the mountaintop. I know what you’re thinking. Rod Serling was a very socially aware dude. He placed a ton of social messages and observations in the original show. Yes, he did. But he did it with a subtle nuance that invited us to engage in conversations about what it means for us today. His goal was to get us thinking and talking. Today it’s all about insulting the people on the other side and calling them trendy names and showing a social superiority, and that’s nothing like what Rod Serling did. But it’s dripping in almost every minute of the first season of this show. What gets me is that in the extras they acknowledge you can’t just beat people over the head. But that’s exactly what happens here. You can’t engage a person in conversation about what’s important AFTER you just told them what a useless excuse for a human being they are.

I will have to admit I loved the final episode where they appear to put the preaching on hold and tell a very good supernatural story with a twist I won’t reveal here but which was the best moment of this entire season of episodes. There are also a ton of Easter eggs out there that will be nice callbacks to the classic moments of the original show. The big callback is the brand Whipple, which appears on everything from network news stations to toasters in this season. It’s a reference to a specific episode entitled The Brain Center At Whipples, and I feel like they are trying to go somewhere big with this.

My favorite episode is “Among The Untrodden”. This is an episode I wish was its own film and honestly felt like a better sequel to the movie The Craft than the forgettable nonsense that released last year, and this didn’t even have witches. This episode is about Irene (Sophia Macy), who is a new student at an all-girls’ boarding school, and she has a lot of interest in psychic abilities. Irene wants to do a science project to prove or disprove whether the ability exists, and to her surprise she discovers one of her classmates may have these abilities.  The writing in this episode is great; so much is executed in a short amount of time that it doesn’t feel rushed, and the characters have time to develop and have arcs that don’t feel rushed or used as a means to just move to point A to point B in the story. It was wise to place this towards the middle of the season, because having it sooner would have really messed with the expectations for the audience.

Another favorite episode of mine I noticed didn’t score so well on IMDB, but I felt it was a fun little romp. “8” takes us to what I believe is the Arctic Circle where a group of scientists discover a creature that can possibly help mankind, but this creature has plans of its own.  This is the only episode that really has a straight-up horror vibe, and it comes across as a B-movie version of Alien, and I make this comparison with the most geek-filled respect. Sure, this could easily be expanded and watered down to be a SYFY movie original, but keeping this episode short, gruesome, and sweet is what made this work.  Is it a bit convoluted when it comes to the creature’s intentions? Of course it is, but that’s part of the episode’s charm that really calls back to the alien panic that was around in sci-fi cinema during the 50’s. Joel McHale puts in a fun performance despite it being a more serious role.

When I mentioned that the episode “8” reminded me of Alien, well, that’s sort of a running problem in this season of The Twilight Zone, how episodes seem to be short remakes of past movies. Downtime seemed to be a boring take on Total Recall and The Matrix; Try, Try was like a dark take on Groundhog Day, and then The Who of You was like a crime-story take on the film Fallen.  While I wouldn’t go so far as to say this was a deal breaker for my thoughts on the season, but it did make me wonder if they were struggling so much for genuine original stories and this is only Season 2, what will happen further down the line? Unfortunately, it all ended with season 2.

The last episode, You Might Also Like, is the only episode I can say I simply didn’t like.  I mean, this one was a chore to sit through. Despite that it had a good idea about aliens using mankind’s obsession with consumer goods to control us, the episode just simply missed its mark.

Of course, the production values are very high, and there are some wonderful ideas here that would have made for more compelling television. If they could just get rid of that soapbox, this could be a wonderful revival of something classic. They do not appear to be heading in that direction, and “That’s not good.”

Gino Sassani is a member of the Southeastern Film Critic's Association (SEFCA). He is a film and television critic based in Tampa, Florida. He's also the Senior Editor here at Upcomingdiscs. Gino started reviewing films in the early 1990's as a segment of his local television show Focus. He's an award-winning recording artist for Omega Records. Gino is currently working on his 8th album Merchants & Mercenaries. Gino took over Upcomingdiscs Dec 1, 2008. He works out of a home theater he calls The Reel World. Favorite films: The Godfather, The Godfather Part II, The Body Snatcher (Val Lewton film with Karloff and Lugosi, not the pod people film), Unforgiven, Gladiator, The Lion King, Jaws, Son Of Frankenstein, The Good, The Bad And The Ugly, and Monsters, Inc.
The Flash: The Complete Eighth Season (Blu-ray) Halloween Spotlight: Dexter: The Complete Series + Dexter: New Blood (Blu-ray)