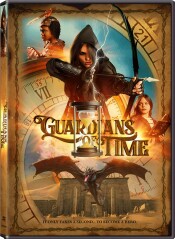 So whenever I am reviewing a movie, I try to identify positive things about the film. Even if I end up not liking the movie overall, I at least try to make sure to point out aspects that I think the film did well, a performance that was particularly strong, or a piece of dialog that resonated with me. It’s part of my process to ensure that I am delivering a balanced review. Even if the film isn’t my favorite, it still has the potential to provide some positive ray of light into my experience.  However, I’m not so sure that I will be able to do that this time around, as Guardians of Time was a film that I just couldn’t wait for it to be over. Now in the interest of fairness, it is abundantly clear that I am not the target audience for this film; that demographic appears to be steered towards the early elementary school crowd. I’d say no higher than second or third grade. Any higher and the production quality is not likely to hold up with them. Then again with this generation, given the technology that they have at their fingertips, it may not hold up with them now.

From the cover art, I’d initially hoped for a high fantasy film that I could share with my family on our next family night. Unfortunately, my daughter, who is the closest in age to the intended audience, barely made it thirty minutes in before she asked to be excused. Now this kind of request is not without precedent, as my daughter claims to have a very high standard in the things that she watches. However, any time I observe her viewing pleasures, they normally consist of her YouTube videos of other people eating. Back on point, normally when my daughter makes this request, I tell her to give the film a little more time and see if she starts to like it. This time around, I couldn’t bring myself to compel her to keep watching. Needless to say, the film clearly did not get the Nalyce stamp of approval.

Essentially, the film follows two sisters and their cousins (another pair of sisters) as they discover a passage that leads them to a mysterious and magical realm, the Kingdom of Keoherus. Trapped in what appears to be a prehistoric wasteland, the four cousins must face ancient beasts and battle dark forces in order to return to their home. Now, when I watching a fantasy film, the most important aspect is the special effects and production quality. I’m afraid that I would have to rate the overall quality here as below that of a B movie; I’d categorize it as a C or D level movie. I understand that the creators were likely not working with a big budget, but even so, it’s difficult to believe that they couldn’t afford something of higher quality. I mean, the intent was to create a magical world; at the very least, you need to make your targeted audience believers. The green screen work was obvious, and the computer generation was sub-par at best. It is difficult for me to imagine a child who will be fooled by this.

When it comes to the characters, nothing made them stick out in my mind. They seem to be going through the motions. The film does attempt to ground some elements in reality, such as the youngest sister feeling alienated and left out by the others, which sends her on the path that lands them in the situation that they end up in, but this theme nothing new. It’s a trope that has become cliché, as is its resolution, where the others begin to appreciate her and help her to see her value.

Jeremy Butler is a film school graduate of the International Academy of Design and Technology. He is been writing for Upcomingdiscs since 2012; however, movies have played a big part of his life for much longer. Favorite genres include horror, science fiction/fantasy, and comedy. Favorite movies are V for Vendetta, Boondocks Saints, Kiss Kiss Bang Bang, and The Godfather.
Halloween Spotlight: Dexter: The Complete Series + Dexter: New Blood (Blu-ray) Samson and the Seven Miracles of the World (Blu-ray)