Posted in: Disc Reviews by Jeremy Butler on November 1st, 2022 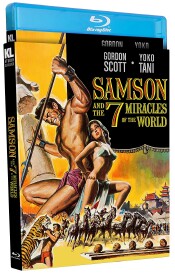 This film gives you two separate options for your viewing pleasure. Firstly, you can view the watch the 98-minute international cut (originally known as (Maciste alla corte del Gran Khan) or the -minute U.S. cut, which is more formally known as Samson and the 7 Miracles of the World. It’s nice to have options. If I were you, I’d opt for the shorter version, because if I’m being honest, even with a shorter run time, the film seemed to drag on. On the other hand, with an additional 22 minutes to play, it is difficult to imagine that greater context was not provided. I will say the international cut has the original score, for which a significant portion was retained for the U.S. version. I think fans of the original film will be better with how the film was originally intended.

I went into the film expecting it to be an adventure with the titular character either witnessing 7 miracles or achieving 7 miracles; something like a Hercules and his 12 labors, or maybe like Val Kilmer with the three miracles he had to achieve in The Saint. Instead, I got a story about a strong man who finds himself embroiled in a war between a horde of sadistic Mongol invaders and Chinese natives that the Mongols are attempting to enslave. Samson is an outsider who intervenes to help protect the indigenous population from the invaders, turning the tide in the conflict with his tremendous strength. It is not a bad premise, and at moments, usually when he displaying his strength, I am even intrigued. However, the story felt too long and too slow paced to hold my attention beyond those moments of adventure.

Paying its proper respect to the time period that which it was shot in, it reminds of spaghetti western time films such as Hang Em High. Of course, that could have more to do with the emphasis put onto the exterior and interior sets, which to its credit do give off a lavish and vibrant setting. These sets of course come courtesy of the 1962 film Marco Polo, which coincidentally also starred Yoko Tani playing the role of a princess. Gordon Scott plays to his strengths by baring his chest and playing the hero, much like he did in the five Tarzan films that he starred in between 1955 and 1960. Given that his character here was very similar, it was easy to embrace Scott in the role of Samson. Scott is very clearly the big draw for the film, which relies more of the physicality of role rather than character depth or development. During the film, we watch Scott battle a tiger, throw men out of windows, and chase down chariots. I don’t mean to discount those things, as they were the portions of the film that got my attention, but outside these moments, there was nothing to hold my attention.

To my mind, the character was a bit one-dimensional. I don’t really feel like we learn much about him or his motivations. He’s your stereotypical good character. To be fair, I suppose we can assume that by using Samson, a very famous biblical character, you can bypass the need to delve into the backstory, but that feels like a cheap workaround. I would have liked to have seen some time dedicated to at least rehashing some known facts about the character. At the least it would be a good refresher course. In truth, it seems that the character of Samson was interchangeable. It could have easily have been Hercules. Baring that in mind, I suppose backstory is less important. However, it still would have been nice to have.

In summation, while the film does have it moments, they are co-mingled in long drawn-out passages that didn’t capture my attention. In the long run, given that it was at least able to gain my interest at times, I’d categorize it as a success. However for me, it’s a one-off; it’s not a film that I would feel a need to watch again. It’s strictly a one-and-done in my eyes.

Jeremy Butler is a film school graduate of the International Academy of Design and Technology. He is been writing for Upcomingdiscs since 2012; however, movies have played a big part of his life for much longer. Favorite genres include horror, science fiction/fantasy, and comedy. Favorite movies are V for Vendetta, Boondocks Saints, Kiss Kiss Bang Bang, and The Godfather.
Guardians of Time Halloween Spotlight: The Bat Special Edition (Blu-ray)