Posted in: No Huddle by Gino Sassani on November 1st, 2022 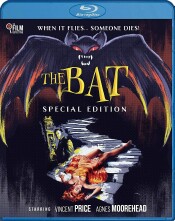 Next year we hope to return to our usual 31 Nights Of Terror. This year we are going to offer you some Halloween Spotlight titles that would be a great idea to pick up for the scary season. So… we’re still your October Night Mayor and here’s a great idea for Halloween from our friends at Film Detective.

“That’s just the wind banging the door, pay no attention to it. Listen to this.”

Enter The Film Detective.Founded by Philip Hopkins, the organization has made it something of a mission to re-master old cult favorite films for broadcast and the high-definition video market. They have a working library of about 3,000 titles. Now some of those films are making their way to Blu-ray, many for the first time. Recently two titles joined the high-definition treatment: Roger Corman’s cult classic Bucket Of Blood and Vincent Price’s ode to the haunted house of classic film, The Bat. Both films were originally released in 1959.

“This is the Oaks, a house in the country which I’ve rented for the summer. As an author I write tales of mystery and murder, but the things that have happened in this house are far more fantastic than any book I’ve ever had published.”

This 1959 Vincent Price film was actually a remake of a 1926 silent era film and the 1930 The Bat Whispers. Both films were based on a popular play by Avery Hopwood and Mary Roberts Rinehart. It was that very play that inspired Vincent Price to take the role. He had seen it in his younger days and remembered it being quite frightening. Unfortunately, Price would ultimately be disappointed in his own film version, claiming it failed to create the creepy atmosphere of the stage production. Indeed, rubber bats on obvious strings didn’t help to build the kind of atmosphere he was hoping for.

The Bat was directed by Crane Wilbur, and it was his last credited time in the director’s chair. He was mainly known as a screenwriter. It’s there that he made his mark with films like House Of Wax, which also starred Vincent Price, Mysterious Island, Ronald Reagan’s Hell’s Kitchen, and Turhan Bey’s The Amazing Mr. X. Of course, he also adapted the play for the script for The Bat.

There’s a lot going on here for a low-budget affair. Bank president John Fleming (Stephens) has embezzled a million dollars in bonds he’s turned into cash and hidden somewhere in his large mansion. He attempts to recruit his doctor and friend Dr. Malcolm Wells (Price). He wants to fake his own death, not expecting it to be less of a fake than he planned. Meanwhile mystery novel writer Cornelia van Gorder (Moorehead) has rented the mansion in his absence. You also have a young man who has been framed for Fleming’s crime. That leaves a lot of people trying to find the loot in the house. Of course, people are going to get murdered in the process.

Then there is the rumor of a master criminal who is known as The Bat. He likes to kill young women by ripping them apart. He releases bats to either terrify or spread rabies. This character is decked out in black cloth over his face and gloves with razor-sharp claws used to produce the bloody carnage that makes up his reputation. Add a police detective and the a few house guests with their own agendas, and you have a pretty creepy film at times. Unfortunately, it descends into camp too often, and it’s overwritten, to be sure.

This restoration isn’t going to win any awards. There are still plenty of print scratches and other artifacts. What does remain is actually pretty sharp and about as good as these budget films are ever going to look and sound. No tape hiss or high end distortion. You get a color booklet that tells the story of writer Mary Roberts Rinehart, and there is a collection of radio dramas starring Vincent Price. They are obviously audio only and are about half hour each. There is also a half-hour feature on Director Crane Wilbur.

The film is loaded with red herrings and some old haunted house conventions. But most of all you might want to “Beware of The Bat”.

Gino Sassani is a member of the Southeastern Film Critic's Association (SEFCA). He is a film and television critic based in Tampa, Florida. He's also the Senior Editor here at Upcomingdiscs. Gino started reviewing films in the early 1990's as a segment of his local television show Focus. He's an award-winning recording artist for Omega Records. Gino is currently working on his 8th album Merchants & Mercenaries. Gino took over Upcomingdiscs Dec 1, 2008. He works out of a home theater he calls The Reel World. Favorite films: The Godfather, The Godfather Part II, The Body Snatcher (Val Lewton film with Karloff and Lugosi, not the pod people film), Unforgiven, Gladiator, The Lion King, Jaws, Son Of Frankenstein, The Good, The Bad And The Ugly, and Monsters, Inc.
Samson and the Seven Miracles of the World (Blu-ray) Ray Donovan: The Complete Series