Posted in: No Huddle by Jeremy Butler on November 13th, 2022 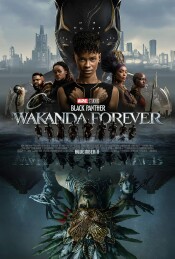 When the MCU announced their intention to move forward with this sequel despite the tragic demise of Chadwick Boseman, I voiced my displeasure loudly. As far as I was concern, there could be no Black Panther without Chadwick Boseman. Additionally, it just seemed unnecessary. The first film was masterful and complete. It didn’t require a sequel. We could have just preserved the integrity of the first film by letting it stay untouched. However, that is not how the business works. If there is a dollar to be made, there isn’t anything that won’t be diluted down for that sake. I realize that sounds harsh, but if I’m being honest, that is what Wakanda Forever felt like to me. This not to say that there weren’t some good, genuine moments that brought me back to my feelings that I had while watching the first one. It is also worth mentioning that I found the film to have paid Boseman the proper respect that I believe he deserved, both with a powerful moment of silence at the beginning of the film, as well as a funeral processional for his character that was fit for a king that he was in film and in real life. It just still wasn’t enough. The elements to make it great were there, but the story leaves a lot of things incomplete and unresolved despite having a runtime of nearly three hours.

I will caveat this review by acknowledging my clear bias. I am a big Chadwick Boseman fan. I believe that we lost an all-time great. While his career may not have been long, it certainly was illustrious. He was without question the go-to actor for autographical films featuring historical black figures, having played Jackie Robinson, James Brown, and Thurgood Marshall. I also believe that he was deserving of that Academy Award he was nominated for Ma Rainey’s Black Bottom. I’m not bashing Anthony Hopkins, just saying that Boseman was deserving as well. I won’t go on and on; I am merely trying to say how sad I am for the loss of a true talent and an even better gentleman.

Back on the subject of Wakanda Forever, we are somewhat through into the thick of things, as we encounter Shuri in the thick of it as she attempts to save T’Challa from a mysterious disease that is never fully explained, which ultimately takes his life. Her inability to save her brother has a profound effect on her and her family as well as larger implications on Wakanda, who has not only lost its king, but its protector. As a remainder, former King and Black Panther Killmonger destroyed the heart-shaped herb which gave the panthers their gifts, suggesting that T’Challa might be the last of the great warrior line. Further complicating matters, at the end of the first film, T’Challa meet with world leaders to essentially establish deeper international relations and announce the existence of vibranium, thereby identifying Wakanda as a global superpower. Following his demise, the world is eager to get their hands on the unbreakable metal; however, Queen Ramonda is hesitant to share, resulting in conflict with even their closest allies.

Meanwhile in Wakanda, T’Challa’s announcement also causes issues back home, as a new enemy arises to attempt to fill the power vacuum left behind by T’Challa’s death. Enter Namor. Now this is a character that I knew nothing about prior to this film, but from what I’ve gathered, he appears to share similarities with Wakanda’s protector. He’s a king of separate previously unknown underwater nation (Talokan), and in possession of unique abilities that make him his nation’s great protector. Namor acts as the film’s primary antagonist. As an antagonist, I found him lacking. He is interesting and his motivation was clear, but he didn’t have the menacing that I’ve come to expect from a MCU villain. Recognizing that the film appeared to be playing on the ideal that the most dangerous enemy is one that believes that he is in the right, it just didn’t feel like Namor fully embodied that ideal. Also, his endgame felt unrealistic, and there was no obvious master plan to make that happen. For the most part, he appears to rely on the threat of “do what I say or else”. In the long run, the threat felt hollow. I would have liked to see the character be more calculating, more cerebral. He is the guardian of an ancient nation that has managed to remain undetected; that requires intelligence. However, it the film he appears to rely on brute strength.

On the Wakanda side, everyone’s role was upped to fill the hole left behind. Most notably was Letitia Wright’s Shuri, who was brought out from the lab and into the field. Shuri is the focal point of the film. We watch her grieve, we watch her struggle, and we watch her attempt to become the hero of the story. I will say that I believe Wright gave a great performance, and the way she slipped back into the role like a glove, it was as if, no time had passed at all. My issue came with it seemed like too many things were thrown at her at once. Firstly, she is clearly grieving and blaming herself for not being able to save her brother, and then she has the situation with Namor. There appears to be a connection between the two; at the very least, they seem to understand the other’s point of view, even if they don’t agree with the other’s methods. I would’ve liked to have seen more conflict in this arena. Given that at some point, she seems to be going down a dark path courtesy of a familiar character making a surprise cameo, it would’ve been great to see her wrestle with her own morality a bit.

In reference to the rest of the cast, everyone does a good job, but only a few stand out, such as the introduction of Dominque Thorne as Riri Williams. Thorne brings levity to the predominantly somber film, injecting genuine humor. Her introduction to Okoye was particularly noteworthy. Speaking of noteworthy, one returning character stole the show, as he did in the first film: Winston Duke as M’Baku. This man was responsible for my favorite moment in the film, where he referred to the head of the Dora Milaje as a certain kind of demon. More than that, Duke embodied the role advisor and provided counsel to Shuri when she needed it most. He did it by prompting her to think outside her lab and embrace her greater destiny. For this reason, he remains my favorite character of the film.

The film left a lot of things unresolved and incomplete for me. For one, the fate of the kingdom felt unclear, as well as the fate of several characters. The final battle felt somewhat anticlimactic. There are indications that this film will not be the end of the series and possibly the character, although in my opinion it probably should be; otherwise we are venturing into the territory of the law of diminishing returns. To put it simply, I just don’t believe that anyone could play Black Panther other than Chadwick Boseman. He once said that “There is no Black Panther without Denzel Washington.” His tribute to the actor that paid his tuition for a summer acting program abroad. However, for me, there is no Black Panther without Chadwick Boseman.

Jeremy Butler is a film school graduate of the International Academy of Design and Technology. He is been writing for Upcomingdiscs since 2012; however, movies have played a big part of his life for much longer. Favorite genres include horror, science fiction/fantasy, and comedy. Favorite movies are V for Vendetta, Boondocks Saints, Kiss Kiss Bang Bang, and The Godfather.
Into the Deep (Blu-ra) Abbott Elementary: The Complete First Season