Posted in: Disc Reviews by Jeremy Butler on November 17th, 2022 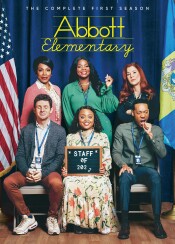 I usually don’t go in for mockumentary series. I missed the boat when it comes to series like The Office and Parks and Rec. However, there was something about Abbott Elementary that captured my interest. So much so that upon completing the first season, I immediately binged the available episodes for the second season. It would appear I’m not the only who has become captivated by the series, as it cleaned up on the award circuit, to include a Primetime Emmy for Outstanding Supporting Actress in a Comedy Series (Sheryl Lee Ralph), and more impressively, a Primetime Emmy Award for Outstanding Writing for a Comedy Series (for show creator, writer, executive producer, lead actress Quinta Brunson). And after watching the show in its entirety, all I can say is those awards were well deserved. Abbott Elementary is a breath of fresh air that has become my new Wednesday night pleasure.

From the pilot episode, the show is grounded in reality; showing the everyday struggles that plague the school system, such as budget issues that result in a lack of supplies, old equipment, and subpar cuisine. An episode that truly speaks to this was “Wishlist” (Episode 3) in which teachers attempt to utilize social media as a means of crowd funding. This episode also showcased an important overarching theme of the series: the evolution of teachers and methods of teaching. The new side prominently features Janine, an idealistic woman who is driven to usher in change and ensure that her students have everything needed to succeed. On the other side is the old guard, teachers like Barbara and Melissa, who have learned to do the best with what they have.

The Janine character grabs your attention with her idealism and determination. The naïve and overly idealistic teacher archetype could have easily been cliché, but Brunson’s fresh-faced optimism is actually very refreshing. Her portrayal is thoroughly convincing. In Lightbulbs (Episode 2), we get the best view into what makes the character tick. She can be headstrong, but her motivations are pure, and this is clear in Brunson’s portrayal. She also infuses the character with quirks that make her relatable and likeable, such as her clear fear of heights, as well as her hardheadedness, which is a trait that sets up most situations that she finds herself in. Episode 2 is also the episode where we start to see her get accepted by the old guard, as they begin to take her under their wing. By the time we make it to the season finale (Zoo Balloon), the character has come full circle and has a commanding presence that she didn’t possess at the beginning of season. It was almost as if she graduated.

The show’s other big draw is its inclusion of Tyler James Williams as substitute hire Gregory Eddie. Williams has really come into his own. I’m proud to say that I no longer immediately think about Everybody Hates Chris as soon as I see him. As Mr. Eddie, as his students refer to him, he avoids being a stereotypical substitute teacher character, by showing a genuine interest in his students. There was some reluctance, as he initially appeared as though he was going to go the way of the stereotype, but he avoids this in a subplot where he confronts a parent about their child’s tardiness and gives a compelling speech about the importance of the child being there on time. Williams and Brunson also display excellent chemistry, as it is abundantly clear what course their relationship will eventually take. That is of course only if William’s Eddie can avoid the over-the-top, bordering on harassment, advances of a certain school principal. I mean, she did say that he was the only person allowed in her bunker.

I could go on and on about the series, but as I previously mentioned, this was the first series that I immediately binged the next seasons available and now is my Wednesday night series. It is lighthearted, family-friendly entertainment that I am happy to share with my family, providing they don’t talk during it. This show not only has the approval of myself, but it is actually has the whole Butler family stamp of approval.

Jeremy Butler is a film school graduate of the International Academy of Design and Technology. He is been writing for Upcomingdiscs since 2012; however, movies have played a big part of his life for much longer. Favorite genres include horror, science fiction/fantasy, and comedy. Favorite movies are V for Vendetta, Boondocks Saints, Kiss Kiss Bang Bang, and The Godfather.
Wakanda Forever Planes, Trains and Automobiles (UHD Blu-Ray) (4k)