Posted in: The Reel World by Gino Sassani on November 24th, 2022 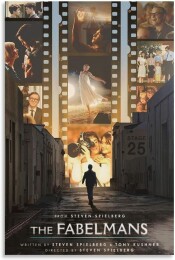 Maybe sometimes life is exactly like the movies. You know the old phrase of art imitating life and that kind of thing. That’s exactly the territory that’s covered in Steven Spielberg’s latest film The Fabelmans. It’s an autobiographical film where the names are changed to protect both the guilty and the innocent. It’s also the first time that Spielberg has directed his own writing in over 20 years. In those 20 years Spielberg has become something of a movie-making machine, and I think he felt it was time that the machine walked away from the spotlight for a minute and allowed the man behind the machine to show his face again. It used to be about heart; lately it’s been about box office, and more recently it’s been about surviving after the hit the industry took with COVID. I think that Spielberg had a lot of things to get off his chest, and it looks like he might have found the time and place to do just that. While the film is a love letter to people who still think movies are a kind of wizard’s magic, it was also a little bit of therapy for this particular wizard. Like all autobiographies, it’s not really finished, and that’s the most profound takeaway I had when the film ended.

Sam Fabelman (Francis-DeFord) is being taken to his first movie. He’s scared of what he’s about to experience, worrying about the room being dark and people being of giant size. His parents insist that he overcome his fears, and they take him to see Cecil DeMille’s The Greatest Show On Earth. From the first flickering moments of light, he’s suddenly mesmerized by what he sees. When the climactic train crash occurs, he is both frightened and compelled to watch. This is the magic of cinema, and little Sammy Fabelman is bitten by the bug. But it haunts him at first, giving him nightmares. His obsession at first isn’t the movie so much as the train crash, and he asks for an electric train set for Hanukkah and ends up reproducing the crash much to the consternation of his father (Dano). But his mother has an idea. She gives him their 8mm movie camera and encourages him to film the crash; this way he can work out his obsession over and over, and it would go easier on the pricey train set. That’s where the obsession shifts from the train to the movie process.

Before long he’s older and now played by Gabrielle LaBelle. He’s using the camera to record everything from family camping trips to candid moments in the home. Eventually he begins to make his own films, at first reproducing moments from films he’s seen and eventually gathering as many as 40 of his friends to create an original WWII picture. From our vantage point, we know where all of this is going. The first echoes of Saving Private Ryan shine through, and he’s using this gift to overcome his own shyness and struggles with anti-Semitism. From here it becomes kind of a standard coming-of-age film that gets him through high school.

Sam also struggles with the old adage that the camera never lies. When his father asks him to cut together a nice film of their camping trip, it’s to cheer up his grieving mother (Williams), who has just lost her own mother. His dad buys him an editing station, and when he takes a closer look at the footage, he uncovers a secret that changes his relationship with his mother and changes his own passion. Later he has an interesting visit from an estranged Uncle Boris, played wonderfully by Judd Hirsch. Through some rather tough love, he comes to understand what it means to be so in love with creating art.

The film ends with his overcoming the bullying he suffered and losing his first and only girlfriend by the use of filming the senior ditch day event at the beach and finally showing it at his senior prom.

The film is full of many aha moments, and I must admit that I expected it to be more magical than it was. There are many such moments, but I guess you could call me greedy. Gabrielle LaBelle does a wonderful job as soon as you let go of the idea he’s playing Steven Spielberg. I struggled with that at first and eventually realized that while it is an indeed autobiographical film, it’s not really a documentary. At some point that happened, and I think for me it was when he discovered the family secret. At that moment these characters became more compelling to me, and Spielberg kind of fell through the cracks. I wish there had been that kind of moment earlier.

I love films that explore the magic of filmmaking. Some have become wonderful favorites like Hugo and the Italian film Cinema Paradiso. Some end up disappointing, like this year’s Empire Of Light. The Fabelmans falls somewhere in the middle for me. Partly, as I said, it’s unfinished. I would be open to another film taking this the next step forward. I doubt that’s going to happen.

It should be noted that the emotional score was provided by John Williams, who has scored most of Spielberg’s films. He’s finally going to retire at 91. He has more Oscars and Oscar nominations than anyone in the history of the industry. His career goes all the way back to the 60’s, where as Johnny Williams he scored such television shows as Lost In Space and Land of the Giants. There likely won’t be another like him.

A highlight of the film is a later cameo by David Lynch as the legendary John Ford. It’s the best scene in the film and brought such a plethora of emotions from tears to laughter to awe. It’s the one scene, if true, I’d love to have witnessed in person.

For all of us who still love cinema and still prefer to experience it in a dark room with a huge screen, this is a love letter to us all. If you prefer your films on your phone or computer screen? Not so much. For the rest of us …” Movies are dreams that you never forget.”

Gino Sassani is a member of the Southeastern Film Critic's Association (SEFCA). He is a film and television critic based in Tampa, Florida. He's also the Senior Editor here at Upcomingdiscs. Gino started reviewing films in the early 1990's as a segment of his local television show Focus. He's an award-winning recording artist for Omega Records. Gino is currently working on his 8th album Merchants & Mercenaries. Gino took over Upcomingdiscs Dec 1, 2008. He works out of a home theater he calls The Reel World. Favorite films: The Godfather, The Godfather Part II, The Body Snatcher (Val Lewton film with Karloff and Lugosi, not the pod people film), Unforgiven, Gladiator, The Lion King, Jaws, Son Of Frankenstein, The Good, The Bad And The Ugly, and Monsters, Inc.
Paramount Presents: Blue Hawaii (UHD Blu-ray) (4K) Holiday Gift Guide Spotlight: Paranormal Activity: The Ultimate Chills Collection (Blu-ray)