Posted in: Disc Reviews by Gino Sassani on November 23rd, 2022 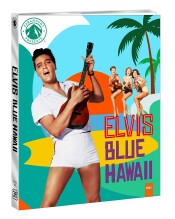 “Like a river flows, Surely to the sea, Darling, so it goes, Some things are meant to be …”

Elvis Presley is often referred to as the King Of Rock and Roll, at least to his fans. There’s no denying the impact that he had on the music scene. He was the first rock and roll star, to be sure. Colonel Tom Parker, his long-time manager and partner, created many of the marketing traditions that are commonplace in the industry today. He knew the value of his star, not only as a performer, but as a brand. For the first time, a musician’s image and name started to appear on everything from bath towels to women’s underwear. Fans are often split on their feelings for the self-styled Colonel, but Elvis would not have become the name brand he still is today without him.

One of those brand expansions tapped into Elvis’s own boyhood fantasy. Elvis had worked as an usher at a local movie theater as a teen. He’s often related that he would linger in the auditoriums, watching those movies and fantasizing that he was James Dean or Marlon Brando, two of his idols. With the help of Colonel Parker, Elvis would get to see that dream become a reality. The King was to expand his realm to include the movie business and Hollywood. No experience? No problem. After all, if Elvis could go from failing music in high school to becoming the highest paid musician on the planet, he could certainly tackle the world of acting. And he did just that.

Elvis went into the army in March of 1958 where he spent most of his deployment in Germany. He was discharged in March of 1960 but remained a member of the reserves until 1964. When he returned to his career, Tom Parker had some new ideas for his meal ticket. The next stop would be Hollywood, and with a few mediocre films along came the one that would remain his most successful box office hit and would set the elements in place that would become staples in the Elvis movies that followed. That film was Blue Hawaii.

Elvis plays Chad Gates, who is returning home to Hawaii after serving in the Army just as Elvis did. He meets his girl Maile (Blackman), and they drive not to his home but to a little shack on the ocean where Chad hopes to escape his family and their expected obligations and find a life of his own. His father owns a huge pineapple organization on the island, and Chad is expected to go into the family business. His father (Winters) is more sympathetic to his son’s desires, but his mother, played by Angela Lansbury, is more concerned with things like social status and appearances. She’s the one trying to pressure Chad into doing “the right thing”. Instead Chad chooses to try his hand as a tour guide and gets the job of escorting a school teacher and her teen girl charges to the hot spots on the island. Among the girls is troublemaker Ellie, who tries to flirt with Chad and ends up trying to kill herself. In an ironic twist of fate, the actress who played Ellie, Jenny Maxwell, led a pretty tragic life of her own, getting shot and killed with her husband in their car when she was only 39 years old.

The film features quite a few hi-jinx and plenty of chances for Elvis to pick up a guitar and give everyone a song or two.

Several of these elements would be repeated in many future films. Many would take Elvis to exotic locations to serve as background for his adventures. Future films took him to Belgium, Mexico, the Middle East, and a return or two to Hawaii where he would broadcast his international concert. That was a compromise from Parker, who unbeknownst to Elvis had no passport, and so Elvis never left the US to perform. The future films would also turn up more and more tunes. This was the first movie with so many songs. Elvis would also continue to capitalize on his own Army service by often playing GI’s who are returning from service. It’s called play what you know, and in the 60’s two things Elvis knew well was music and returning from the service.

Joan Blackman would return just a year later to play Elvis’ s love interest again in Kid Galahad. Elvis’s father was played by Roland Winters, who got his start in an uncredited role in Orson Welles’ iconic Citizen Kane. He also appeared in West Side Story, and on television he visited pretty much every comedy from The Lucy Show to Green Acres. His part here is really pretty small, and he’s mostly overshadowed by Lansbury, who has the meatier part. Of course, Lansbury passed recently and was a hit both in films and the stage as well as having a popular television series that mirrored Agatha Christie in Murder She Wrote.

At the cabin the film plays a little homage to From Here To Eternity, a film that launched the movie career of another huge singer. But let’s face it, Elvis is no Frank Sinatra, and there aren’t going to be any Oscar awards on his mantle. All in all, Elvis does a pretty good job as an actor here, and he was quite an underrated actor at times.

Blue Hawaii is presented in its original aspect ratio of 2.35:1. The 1080p image is arrived at with an AVC MPEG-4 codec at an average 60-65 mbps. The ultra-high-definition image presentation is a mixed blessing. Coming from a 35mm source, we have a film that was native 4K to begin with.  Paramount gave this the full treatment, scanning from a 35mm negative in a 4K/16bit intermediate. The opening sequence which relies on a bit of stock footage was rebuilt, but you’ll find it’s exactly reproduced, but without all of the dullness and high grain you’ll find on the Blu-ray. Colors jump out thanks to a wonderful HDR and Dolby Vision process that brings out the wonderful blues and greens of the ocean. You’ll get a much better appreciation for the Hawaiian locations with all of that new vivid color that extends to the costumes and flowers in the film. Black levels are pretty much average, but there’s little need outside of a few scenes, and they will provide enough shadow definition to make the action clear enough. It’s a huge upgrade and should satisfy the most picky of fans.

The DTS-HD Master Audio 5.1 is everything you need it to be. Remember that this was originally a mono film, and if you get aggressive now in the surrounds, you will pretty much take away any of the original intent. Here surrounds don’t provide much new information, but rather allow for more depth. The same is true for the sub. You won’t be shaking the room here, and you shouldn’t want that from this film. The songs are the real audio attraction here, and they’re as clear as you’ll get from a CD that is sourced from this period. Dialog comes through, although there are times it’s hard to make out exactly what Elvis is saying, but that’s not the fault of the audio presentation. Sometimes the King mumbles. So be it.

The only extras are found on the Blu-ray which are exactly what you got there. There’s a photo scrapbook, a trailer, and a commentary track.

With the recent release of the successful bio-pic Elvis it’s an appropriate time for Paramount Presents to bring one of the best known of Elvis Presley’s films to 4K/UHD. It’s just in time for the holidays, so if you have an Elvis fan who also digs the movies on your list, this one will give them a pretty wide grin. Even if they don’t have a UHD player yet, there’s a Blu-ray copy to keep them happy until they upgrade. These kinds of films are always a hit. “Almost always.”

Gino Sassani is a member of the Southeastern Film Critic's Association (SEFCA). He is a film and television critic based in Tampa, Florida. He's also the Senior Editor here at Upcomingdiscs. Gino started reviewing films in the early 1990's as a segment of his local television show Focus. He's an award-winning recording artist for Omega Records. Gino is currently working on his 8th album Merchants & Mercenaries. Gino took over Upcomingdiscs Dec 1, 2008. He works out of a home theater he calls The Reel World. Favorite films: The Godfather, The Godfather Part II, The Body Snatcher (Val Lewton film with Karloff and Lugosi, not the pod people film), Unforgiven, Gladiator, The Lion King, Jaws, Son Of Frankenstein, The Good, The Bad And The Ugly, and Monsters, Inc.
Mystery Men (UHD Blu-Ray) (4k) The Fabelmans