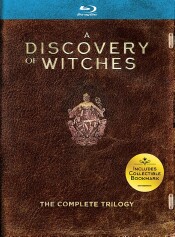 I think I see your problem. You have this list. It’s a list of people you need/want to buy a Christmas gift for. The trouble is that they’re into home theatre, and you don’t know Star Trek from Star Wars. You couldn’t tell a Wolf Man from a Wolverine. And you always thought that Paranormal Activity was something too kinky to talk about. Fortunately, Upcomingdiscs has come to the rescue every Christmas with our Gift Guide Spotlights. Keep checking back to see more recommendations for your holiday shopping. These gift guides ARE NOT paid advertisements. We take no money to publish them. With conditions as they are, shopping won’t be easy this season. The nice thing about discs is that they’re so easy to get from places like Amazon that you can give a great gift and stay perfectly safe while you do it. AMC Networks brings us A Discovery Of Witches: The Complete Series on Blu-ray:

“Once the world was full of wonders, but it belongs to the humans now. We, creatures, have all but disappeared. Daemons … vampires … witches … hiding in plain sight. Ill at ease even with each other. But, as my father used to say, in every ending, there is a new beginning. It begins with absence and desire. It begins with blood and fear. It begins with A Discovery Of Witches.”

And that’s how it all starts. The ambitious series from Sky is based upon The All Souls Trilogy novels by Deborah Harkness. In the first season of eight episodes, we are introduced to Diana Bishop, played by Teresa Palmer. She a witch who is living in a world where there are three species of creatures: witches, vampires, and daemons (Demons). Diana ‘s parents were killed when she was young because of their witchcraft, at least that’s what she’s been brought up to believe by her Aunt Sarah (Kingston) and her lover “Auntie” Em (Pettiford). No, we’re not in Kansas anymore. Notice no one is singing Carry On Wayward Son. This isn’t Supernatural, after all. Never mind all of that. Diane isn’t a very good witch, because her powers appear to be stunted. She doesn’t understand why until she becomes a visiting professor at Oxford and requests a book from their antiquities library. The book is called Ashmore 782, otherwise known as The Book Of Life. No one has been able to find it for centuries. But when Diane summons the book, she gets it. What she didn’t know was that she was setting in motion a series of events that will cut across each of the creature lines.

It starts with vampire Matthew Clairmont, played by Matthew Goode. He’s drawn to Diane and ends up joining her in her quest to understand her powers and the political crapstorm she’s just unleashed. Others want the book. The witches want it because they believe it reveals how witches once created vampires, and that means they can uncreate them. Daemons are kind of the peacekeepers of the creature world. They all belong to a secret council with representatives from all three groups on a cloaked island off the coast of Venice, Italy. The first season introduces us to these players and puts Diane and Matthew on the run. Turns out she’s a time-walker, and the best place they can escape is the past where they can rediscover the book and where she can learn to bring back and use her true powers. So Season 2 has the couple appearing in 1590’s England, where Matthew inhabits the body of his earlier self.

We get some pieces of an overall story here. Creatures are dying out. Spells aren’t as powerful, and vampires can’t sire new vampires. The book might offer an answer to these problems. There’s also an interesting story which isn’t developed enough of two daemons about to have a witch child. That’s something the council wants to get their hands on. A great idea, but totally wasted this season against the meandering 16th century story.

The unfortunate thing here is how awkward this 10-episode second season plays out. There is too much to do in too little time, and at a snail’s pace. All of these are creative choices that could have been made differently to give this promising world and series a chance to make its impact. Instead we spent entirely too much time showing off the time period costumes and sets and throwing in historical figures that really play no part in the ultimate story. There’s the slow-burn romance going on, and it’s sometimes painfully slow. Diane finds a coven of witches who have agreed to train her to use her powers, which requires playing cat’s cradle with light in the air trying to learn to tie ten knots. Did I mention how excruciatingly slow this all is?

To make things harder to follow, there are a few storylines playing out in the present for no other reason than to give all of the other characters who didn’t make the trip to 1591 something to do. The vignettes are short and often a bit of a head-scratcher. I found I never did quite follow those events, and they absolutely never … not once, tie into the main story in the 16th century.

The series has tremendous promise. I never read the books, but the world and mythology are pretty compelling. There’s a really wonderful atmosphere to the entire thing with first-class production design. That’s where it all ends. For such a slow and potentially steamy romance, there is absolutely no chemistry at all between Teresa Palmer and Matthew Goode. I mean none at all. They do not play off each other well, and you don’t ever get the feeling that they are these soul-mates. The motivation is just as weak, as we never see this relationship actually begin. They don’t like each other, and then they do because the writers said so. Ooooookay. Palmer herself is pretty much the weak link. Her performance is flat, and she likely should have just gone with her natural Aussie accent, because it comes and goes throughout, which honestly doesn’t help with the performance, chemistry, or atmosphere of the series. Bad casting can kill even the most promising of shows, and it’s a killer here, to be sure.

The season finds them returning to the present, but I’m not sure what they truly learned or where it goes from here.

The third season finds the couple returning to the present only to find that things have pretty much gone to Hell. Knox has killed Emily and the Council is unhappy to learn our couple is going to have twins. It breaks the covenant and so Matthew works to create his own scion/family. He also trusts to a DNA lab run by a friend of Diane’s to try and cure the blood rage. By the end of the season the DNA results reveal something surprising that, in the finale changes the world of the creatures forever. The show has now completed its final episode and it’s all here. “With every ending there is a new beginning.”

Gino Sassani is a member of the Southeastern Film Critic's Association (SEFCA). He is a film and television critic based in Tampa, Florida. He's also the Senior Editor here at Upcomingdiscs. Gino started reviewing films in the early 1990's as a segment of his local television show Focus. He's an award-winning recording artist for Omega Records. Gino is currently working on his 8th album Merchants & Mercenaries. Gino took over Upcomingdiscs Dec 1, 2008. He works out of a home theater he calls The Reel World. Favorite films: The Godfather, The Godfather Part II, The Body Snatcher (Val Lewton film with Karloff and Lugosi, not the pod people film), Unforgiven, Gladiator, The Lion King, Jaws, Son Of Frankenstein, The Good, The Bad And The Ugly, and Monsters, Inc.
Assassination (Blu-ray) The Valachi Papers (Blu-ray)