Posted in: No Huddle by Brent Lorentson on November 28th, 2022 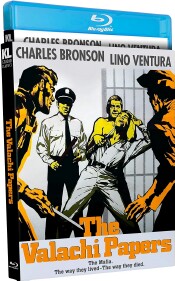 The 1972 film The Valachi Papers is the mostly true story of Joe Valachi, who was made famous/infamous for his testimony to the US Senate about the activities of the Cosa Nostra, or what we more commonly call the mafia. I have to be honest; I don’t’ know how this film has escaped me for so long, I hadn’t even heard of it till Kino pulled this one from the vaults to release on Blu-ray. For film lovers, and especially those who love a good old fashioned gangster film, I’d say this is a must-watch, mostly because the first thing that came to mind while watching this film is how much this film must have influenced Martin Scorsese and his approach to making Goodfellas, If that’s not enough to get you to want to check out the film, well, let me tell you a little more about it.

Charles Bronson plays the role of Joe Valachi, and this film does span his entire criminal career from the early 1920’s to his testimony in the 1960’s. What’s a little surprising is that Bronson plays the role throughout. Of course back then the filmmakers couldn’t pull the CGI tricks we see in The Irishman, and instead all they use for the aging effects in this film are simple makeup and hair styling products. Is it believable seeing Bronson playing a character in their 20s when at the time the actor was well into their 50s? No, but I still appreciate it more than the de-aging technology we’re seeing nowadays.

The film starts off with Valachi in prison and him finding out that he is a marked man. The top man is Vito Genovese (Lino Ventura), who despite being behind bars is still in charge of things. Despite his years of loyalty to the Cosa Nostra, Valachi manages to strike up a deal with the government to protect himself and his family, so he begins to tell an agent his story while revealing the inner workings of the mob. There are some big names he has some stories about, “Lucky” Luciano and Bugsy Siegel all managed to cross paths at some point with Valachi along with all the heavy hitters in the NY crime scene.

This narration of the crime life as being told by the gangster and the audience watching through the narrator’s eyes is definitely a point that had me thinking about Goodfellas but just not as polished. While this isn’t as over-the-top or as operatic as The Godfather, this take does feel a bit more genuine to what the gangster life was like. The film starts with Valachi as a wheelman, to him working his way up through the criminal enterprise, to him taking part in numerous hits to them running their businesses. Because the film spans several decades, there are a lot of characters who come and go, and it can get complicated keeping track of everyone, but the focus is always around Valachi and him rationalizing to the agent why he did the things that he did.

Bronson carries this film, and he delivers a pretty good performance, but the problem is the character is just not very likeable. We see him partaking in violent jobs and at times just being a bystander to some pretty gruesome things, but we don’t get much  of who the person really was. The closest we get to an emotional reaction from the character is when one of his friends is savagely attacked and left bleeding out on the floor and Valachi has to put him out of his misery. Because of the time this was made, more emphasis was put into the lead characters maintaining a tough-guy image than being a three-dimensional character, and this hurts the film a bit.

Terence Young (From Russia With Love and Thunderball) directed the film, and when you look at his resume you can appreciate why he was hired to tackle a film that is as dense with material and is shot with such a dramatic scope.  This is a big movie without the big budgets we’re used to seeing. The film was shot on location in New York but was also shot in the studios owned by Dino De Laurentiis.

The film runs a little over two hours, and when you consider just how much the film gets into, it is no wonder it feels a bit jumbled at times and why it’s hard to keep track of all the characters coming in and out of the story.  For what it is, I really like the film, but I feel this is a film that could have been better if done with a bigger budget and a hefty runtime. With the amount of material this story covers, this could easily be a 3-hour film, and it could have been something epic. But when you look at the product that we can enjoy now, it’s still a pretty fun ride.

Brent Lorentson is a horror writer and film critic based out of Tampa, Florida. With a BA in Digital Film, he co-wrote and co-directed Scavenger Hunt. His short stories have appeared in various horror anthologies. In 2019 his short script Fertile Blood will be a part of the anthology horror film Slumber Party. He is currently working on his first novel A Dark and Secret Place set to be released in late 2019. Favorite Films: Taxi Driver, Fight Club, I Saw the Devil, The Wild Bunch, Dawn of the Dead, A Clockwork Orange, Pulp Fiction, Heathers, The Monster Squad, and High Fidelity.
Holiday Gift Guide Spotlight: A Discovery of Witches The Complete Trilogy High Plains Drifter (UHD Blu-ray) (4K)