Posted in: The Reel World by Brent Lorentson on November 30th, 2022 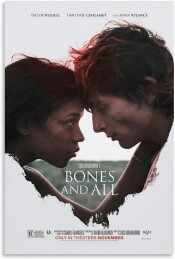 I’ve seen Bones and All twice now, and I have to say this is certainly one of the standout films of 2022. A road film that plays out as a romance between two young cannibals trying to find their place in the Reagan era America, well, it’s just the strange mix that works.  Horror isn’t supposed to be this sweet, and romance isn’t supposed to be so gruesome, but director Luca Guadagnino manages to put together a film that is so good that I believe it has a real shot at winning some prestigious awards, and it is so well deserved. I’m going to recommend going into this knowing as little as possible. Just simply allow the film to expose its dark and bloody underbelly to you, and just let yourself care for these monsters that are simply trying to find their place in the world and in the process even fall in love.

Maren (Taylor Russell) is a teen that has grown up with her father. The pair have traveled city to city having to use different aliases because Maren is different; she’s an “Eater”.  Eaters are slightly different from your typical cannibal; an Eater does so because it’s a need, sort of like a vampire, and they also have a heightened sense of smell, which comes in handy when coming across other Eaters. When Maren attacks a girl at a sleepover, it’s time for her and her father to go on the run again, though the dad has decided he’s done all he can for his daughter and he leaves her behind with some money, a cassette tape, and her birth certificate.  This sets Maren on her path to finding out who her mother is and on her journey to understanding who she is and along this journey she meets some unique and frightening characters along the way.

Maren discovers she is not the only “Eater” in the world when she comes across Sully (Mark  Rylance). She claims to have smelt him from quite a distance, and he offers her a good meal and some friendship. Rylance has quite an impressive filmography. Just about every role I’ve seen him in, he dazzles me. Sully is hands down my favorite role I’ve seen him in.  How he manages to play the role with such sweetness and still seem dangerous is impressive, and I pretty much guarantee he’s getting himself a best supporting actor nomination for this role. The level of commitment he gave this role, is a side we haven’t seen from him before.

It takes a while till Maren finally meets up with Lee (Timothee Chalamet), but the moment we see him and Maren together, the film seems to shift gears as though to try and convince us that the danger is gone. Lee is a drifter and an Eater, and against his better judgment he decides to let Maren tag along with him, and he’s willing to teach her a few things on how to survive on the road. The chemistry between Russell and Chalamet just oozes off the screen. Their friendship and relationship is so believable, and we get to care for the pair to the point when we see them do some pretty horrible things, well, we still want to root for these two. The pair both have some crazy family issues that I won’t get into because it does get into some spoiler territory, but it definitely makes this pair all the more empathetic.

The film is quite simply about two monsters that find love and realize that they both are deserving of love. I mentioned how I saw this twice, and to be fair, the audiences couldn’t be any more polarizing. The first time was at Fantastic Fest with an auditorium filled with genre fans, and the second screening was with a mostly empty auditorium with some critics who seemed less enthusiastic about the film.  I wouldn’t say this was as divisive as Hereditary (I stand by that film being a modern classic), but because of the subject matter I feel some people are just going to shut this film down because they don’t believe horror can be considered art. I’d pair Bones and All with the film Let the Right One In (the Swedish version), because both films beautifully handle relationships with heavy horror elements.

The film clocks in at 2 hrs 10 min, and to be fair, yes, it does drag, but I wouldn’t say it is boring. The pacing works because it wants you to feel the time that has passed with these characters on the road and reflect with the characters and their actions. We need to feel the stretch of time, because they’ve been on the road for months, and their lives are going through some drastic changes. I’ve seen people want to compare this to The Badlands, and I see it for sure. I appreciate, though, that the cinematography is not focused on showing beautiful vistas and just serving as eye candy, because Guadagnino wants us to not savor the beauty; he wants us to remember that the landscape is dangerous.

In closing I’ll say this: Bones and All is a bit of a game changer on how horror should be treated.  While the cannibalism isn’t like Silence of the Lambs, the film is just as shocking, and I’d say even more haunting. For those young fans that see Chalamet as their heartthrob, I’d proceed with caution on this one, because this is not your typical teen romance, and it does earn its R rating. Then there is Taylor Russell, who simply makes this movie work and delivers an incredible performance. To even put things in simple terms, Bones and All is the chef’s kiss of horror and of cinema this year. As a side note, I’d skip on having BBQ too soon after this film.

Brent Lorentson is a horror writer and film critic based out of Tampa, Florida. With a BA in Digital Film, he co-wrote and co-directed Scavenger Hunt. His short stories have appeared in various horror anthologies. In 2019 his short script Fertile Blood will be a part of the anthology horror film Slumber Party. He is currently working on his first novel A Dark and Secret Place set to be released in late 2019. Favorite Films: Taxi Driver, Fight Club, I Saw the Devil, The Wild Bunch, Dawn of the Dead, A Clockwork Orange, Pulp Fiction, Heathers, The Monster Squad, and High Fidelity.
Exclusive Interview With Bruce McAllister: Author Of Stealing God And Other Stories The Offer