Posted in: Podcasts by Gino Sassani on November 30th, 2022 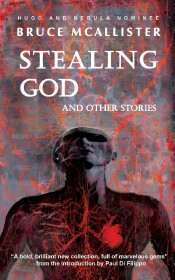 If you have been coming to the site for any length of time you know we also pay tribute, from time to time, to the written word. I’ll often share the title of a good book when I find them. We also interview these writers when chance sends them our way. We scored 2 for 2 with Bruce McAllister. He’s compiled a wonderfully enjoyable collection of some of his best short stories called Stealing God And Other Stories. He’s the kind of writer you might find at your local university giving a master class on the craft. I had the opportunity to speak with him just after Thanksgiving, and the conversation was rewarding. His commentary on writing is insightful and compelling. You should give his collection a read. You won’t regret it. I think you’ll want to hear what he has to say on the subject of writing and Stealing God And Other Stories. Just bang it here to listen in on my chat with Bruce McAllister.

Gino Sassani is a member of the Southeastern Film Critic's Association (SEFCA). He is a film and television critic based in Tampa, Florida. He's also the Senior Editor here at Upcomingdiscs. Gino started reviewing films in the early 1990's as a segment of his local television show Focus. He's an award-winning recording artist for Omega Records. Gino is currently working on his 8th album Merchants & Mercenaries. Gino took over Upcomingdiscs Dec 1, 2008. He works out of a home theater he calls The Reel World. Favorite films: The Godfather, The Godfather Part II, The Body Snatcher (Val Lewton film with Karloff and Lugosi, not the pod people film), Unforgiven, Gladiator, The Lion King, Jaws, Son Of Frankenstein, The Good, The Bad And The Ugly, and Monsters, Inc.
The Adventures of Ozzie and Harriet: Seasons 7 & 8 Bones and All