Posted in: No Huddle by Brent Lorentson on December 3rd, 2022 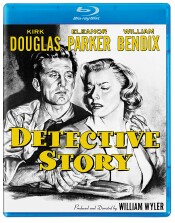 Director William Wyler is a bit of an icon when you look back in Hollywood history. He’s a director with such classics under his belt as Roman Holiday, Funny Girl, and then of course Ben-Hur. But before he filmed those, he did a smaller and more intimate film called Detective Story. This isn’t a big spectacle, but instead it is a gritty drama that takes place over a single day in a New York police station. The film is so simplistic in scope that it’s no surprise that it was originally a stage play, but it’s Wyler’s direction that elevates this film to something bigger. Then there are the remarkable performances from Kirk Douglas and the rest of the cast that make this film better than the potential snore-fest this could have been. Jim McLeod (Douglas) is a hard-nosed cop who likes nothing more than to take the criminals down in his city, to the point that he doesn’t realize it’s been days since he’s been home and seen his wife.  He’s about to head out when he has an encounter with a criminal that sets McLeod off, and he attacks then criminal in custody. The altercation is bad enough to send the criminal to the hospital and jeopardize McLeod’s career. This is just one of the stories going on in the police station. There’s also a woman who’s there after her husband assaulted her, a shoplifter who finds himself in a bind but has a female companion that is trying to help him out, then there is a burglar with an odd sense of humor. All these stories are unfolding and somewhat overlap as the officers do what they can to help each other out, but the main focus seems to be on McLeod.

The drama between McLeod and his wife Mary (Eleanor Parker) is certainly the more interesting story, though I feel audiences these days would be clawing at the screen complaining about how misogynistic McLeod is. It’s their conflict that seems the most profound, though, because at the root of it all this is exploring what happens when couples keep secrets from the other, even if the secrets are kept for good reason. This is what makes this film feel timeless despite being released in 1951. Then factor in the police brutality storyline, and this seems as though it’s been ripped from the modern day headlines. The way these characters are written, it’s easy for the audience to side with one or the other, though there is a dialog exchange that stuck with me where Mary objects to being called a “tramp”, and McLeod’s response to how he interprets the meaning of the word speaks volumes to the time and the characters.

The way Wyler shot the film was relatively standard for the time, and he does a good job at capturing the chaos in the room, but you just know it wouldn’t be shot the same way now. While this was made up of locked down shots, I’d imagine filmmakers today would go handheld and even go so far as to shoot this in one take, or in the illusion of one take, i.e. Birdman. While I’m sure that would be effective, Wyler’s take genuinely feels as though we’re a fly on the wall or perhaps a criminal in a seat just observing all that is going on in the station. and because of this we feel involved in the story.

It’s the script that carries this film and makes each of the characters pop, The closest comparison I could make is this feels like I’m watching something from David Mamet, and at first I wasn’t so sure how I felt about the film, but then I found myself riveted by these characters. The ending is even a bit unexpected and leaves you wondering what’s next.  Again, I can’t sayenough on how timeless this film is, and it could work in an old western setting or in today’s times and still leave an impression. This is one of those gems that I wasn’t expecting, and I enjoyed quite a bit.

Brent Lorentson is a horror writer and film critic based out of Tampa, Florida. With a BA in Digital Film, he co-wrote and co-directed Scavenger Hunt. His short stories have appeared in various horror anthologies. In 2019 his short script Fertile Blood will be a part of the anthology horror film Slumber Party. He is currently working on his first novel A Dark and Secret Place set to be released in late 2019. Favorite Films: Taxi Driver, Fight Club, I Saw the Devil, The Wild Bunch, Dawn of the Dead, A Clockwork Orange, Pulp Fiction, Heathers, The Monster Squad, and High Fidelity.
The Offer French Noir Collection: Le rouge est mis / Le dos au mur / Un témoin dans la ville (Blu-ray)