Posted in: No Huddle by Dan Holland on December 3rd, 2022 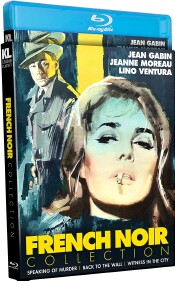 France is a country that is absolutely saturated by a rich cinematic history. Beginning in the late 1890’s with the Lumière Brothers and their Cinématographe, traveling to the middle of the century with Cahiers du Cinéma, the French New Wave, and Cinéma Vérité; all the way to more contemporary French cinema. The country still makes incredible waves that influence the film industry. Interestingly, the term “film noir” came directly from French film critics, commenting on the low-key lighting used in many of the gangster films of that time period, calling them “black films” or “dark films.” It wasn’t until the 1970’s that Auteurs began to intentionally make film noir, however, the characteristics of classic film noir were not lost on French filmmakers who consumed these “dark films” as means of inspiration.

I’ve got to be honest; this is a definite outlier in the set. The only reason why I believe it is included is because it has elements of a plot that are very similar to the pre-war noir films of Hollywood: crime, gangsters, main characters with questionable motives or complicated psychologies (‘heavy’ characters), and of course a lot of violence. The film portrays aging, small-time crime lord, Louis, and his slowly decaying team of baddies. When his estranged brother, Pierre, comes back to town, the police detain him to ‘persuade’ him to discreetly bring them information on his brother’s gang and their actions. Conflicted, Pierre must choose to keep quiet or bare guilt without finding a target on his back.

What really bothered me about this film is that so much of it happens in broad daylight. The first heist I believe is shot at night, but every other crime just takes place in the middle of the day, outside. It’s not that it detracts from the film, but when comparing it to the other films in this set, it just feels off. There are a few missed opportunities of scenes that were shot indoors that could have played more with low-lighting, but even those just lit the scenes almost in a high-key manner. Putting the mise-en-scène aside, the film’s story isn’t entirely interesting either. Themes of family, forbidden love, and deceit are all present, but they don’t really provide enough intrigue to move the plot forward. So, if you are looking for a classic noir film, this might not be your go-to.

Now this is what I’m talking about! This is my favorite film of the collection. It has some strong Vertigo vibes, and I love them. The film is about a very wealthy industrialist, Jaques Decrey, who finds out his wife is cheating on him with a former lover. Instead of confronting the guilty parties, he blackmails his wife. The more the film progresses, the stranger and more anxious this cruel plot becomes, taking you on a ride of deceit and betrayal. It checks all the boxes of a great film noir: those ‘heavy’ characters I mentioned previously, low-lighting, shadows, intriguing set pieces (the protagonist, if we can call him that, lives in an incredible looking mansion), creative cinematography, and a fantastic score that really pulls a lot of the scenes together.

I bring up creative cinematography because there were several scenes that had really deliberate, and perceptually difficult camera movement. Also, fantastic frame composition. As much as I can appreciate the way this film looks, it is really the narrative that is the star of the show, and that is a big compliment coming from me. The entire premise of the film is steeped in the fetishization of cuckoldry; in fact, the film goes out of its way to tell you this through the dialogue multiple times. It’s bizarre and displeasing in all the right ways. The longer that the Decrey gets away with his conniving game, the more disturbing it gets; leaving you uncomfortable, anxious, and best of all, guessing what will happen next.

If there is one thing that dastardly, noirish criminals hate, it’s loose ends! Witness in the City is full of them, to a comedic fault. Upon learning that his wife was murdered by her extramarital lover, Ancelin acts and avenges his wife’s death. An eye for an eye. Little does Ancelin know that his target called a cab, and upon Ancelin’s exit, he comes face to face with the taxi driver, or the witness. Ancelin now spends the rest of the film trying to tie up this loose end so he can return to his gang in Paris. If you can gather from that plot description, this narrative is sort of all over the place, and that is what makes it almost silly by the end. Despite this silliness, however, the film reveals a lot of fantastic cinematography and editing techniques as it progresses.

Directed by Édouard Molinaro (who also directed Back to the Wall), this film is another example of great film noir aesthetics. Much of the film takes place at night in the streets, and it is probably some of the best outdoor, low-key light shooting I have seen. It’s quite literally “film noir,” and I absolutely love that. Another thing that I really enjoyed about this film was the fantastic car chase sequences towards the end of the film. Molinaro certainly understands cinematography and composing aesthetically pleasing images, but what sets this film apart from the others is the editing techniques he employs. There are many hard, transitional cuts to closeups that are very jarring. It reminded me of watching a lot of the films by Jean-Luc Godard and his use of jump cuts. Witness in the City predates Breathless, which is the “poster” film for the French New Wave. Overall, the film has the most “noir” looks to it, but the visual absurdity at the end of the movie allowed the more devious and disturbing Back to the Wall take first place in this set.