Posted in: No Huddle by Jeremy Butler on December 20th, 2022 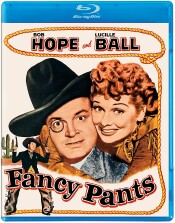 I grew up hearing about Bob Hope and Lucille Ball. It was more about his television credits and hosting accomplishment. I’d say hosting the Academy Awards 19 times, which to my understanding is a record that still holds up to this day, is something to be proud of. Hell, his next closest competitor is Billy Crystal, who is still ten behind him. Then there is Lucille Ball, who is obviously most notable for her popular television series, I Love Lucy. I hear about these comedic icons all my life and now through Fancy Pants, the second of four films that these two collaborated on. I got to see them in action. And while there is much about the film’s brand of comedy that went over my head, it was easy to see the appeal of these two, as individuals and as a comedic pairing. Based on a musical by the name of Ruggles of Red Gap, Hope stars as Humphrey, real name Arthur Humphry, a struggling American actor masquerading as British to be part of a British acting troupe. When another British actor enlists the cast to pose as an aristocratic family in order to impress visiting Americans, Effie and Agatha Floud (Ball), Humphrey, pretending to be the family butler, finds himself in the employ of the visiting family, as he is tasked with refining both Effie’s husband and the tomboyish Agatha. While attempting to provide the two with a measure of culture, sparks begin to fly between Humphrey and Agatha, but their budding relationship may be threatened by his false identity. Meanwhile, a misunderstanding of Humphrey being a “gentleman’s gentleman,” leads the rural townsfolk to mistakenly believe him to be an aristocrat. Humphrey finds himself forced to maintain multiple deceptions: he has to pretend to be a British butler for the Floud family while also pretending to be a politically savvy Englishman for the townsfolk. All of which becomes further complicated by a visit from President Theodore Roosevelt.

The plot was a bit busy for me at times. However, I did enjoy watching Hope as he juggled what amounted to be three characters in one role. To his credit, I do believe he was convincing in each performance. As they were meant to be humorous and he was expected to struggle to maintain the lie, this worked to his benefit. Ball had it a bit easier, but even so her quick-wittedness carried the dialog for me. She is surly and sarcastic, which are traits that I hold in high esteem. My knowledge of Ball is limited only to the few I Love Lucy episodes that I’ve seen, but this role seemed to play right in her wheelhouse. The film is a bit campy at times, such as when Humphrey samples the punch which is so spiked that his breath made a portrait of the Leaning Tower of Pisa stand upright. This is a bit cheesy and over-the-top. Even so, it is in keeping with the film’s slapstick nature.

I wasn’t a big fan of the ending, as it felt rushed, which in my opinion affected the film’s conclusion, which again was very campy and unrealistic. However, the chemistry between the leads and the film’s principal themes were more than enough to make it a enjoyable experience in for me. I’m not saying that I’m going to seek out the other three films that feature Hope and Ball. However, if I was to come across them, I would not be opposed to watching them. If they are anything like Fancy Pants, it’s a safe bet that it will be an enjoyable experience.

Jeremy Butler is a film school graduate of the International Academy of Design and Technology. He is been writing for Upcomingdiscs since 2012; however, movies have played a big part of his life for much longer. Favorite genres include horror, science fiction/fantasy, and comedy. Favorite movies are V for Vendetta, Boondocks Saints, Kiss Kiss Bang Bang, and The Godfather.
Avatar: The Way of Water Holiday Gift Guide Spotlight: Warner Brothers UHD/4K Releases