Posted in: The Reel World by Gino Sassani on December 16th, 2022 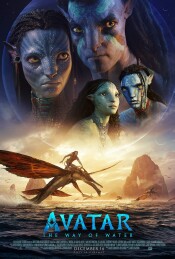 “The way of water has no beginning and no end.”

We all know better than that, don’t we? It’s been 13 years since James Cameron first brought us to the moon planet of Pandora. What I remember most from that 2009 experience was the milestone breakthroughs in filmmaking that Cameron brought to the screen. Avatar reinvented 3D for theaters and created a new wave of 3D releases thanks to a technology that made the experience smoother and allowed us to enjoy the spectacle in a whole new light. Cameron also brought us some wonderful innovations in cinematography, motion capture performance, and the nearly seamless blend with the computer-generated artificial and live-action photography. It was a marvel, to be sure. What I didn’t walk away from that experience with was a strong emotional connection to the story or characters. I’ve often called it The Smurfs version of Dances With Wolves. The story never really grabbed me and, for me at least, the film remained nothing more than the technological marvel that it was.

Fast forward 13 years later, and a lot of things have changed. James Cameron has been promising us multiple sequels for a decade. The use of 3D in the cinema has waned and has all but disappeared in the home entertainment world. Like many previous 3D cycles, the novelty has worn-off. Motion capture has progressed considerably beyond what Cameron did with Avatar, and we have witnessed new breakthroughs in movie technology. More important, the ownership of Fox has changed, and ironically for Cameron who once joked about working for Disney, he now works for Disney. With all of these changes I went into this screening with some cynicism. I certainly expected that there would be another quantum leap in technology and that Cameron would prove to be its master. I got exactly what I expected there, but then something else happened. It was unexpected and a little bit of a Christmas miracle. The Grinch’s heart grew three sizes that day. OK, I made that last part up. I walked away from the film with a feeling I didn’t get at Avatar. Avatar: The Way Of Water actually gives us character development. It gives us a rather nice bit of story, and more importantly, at least for me, it has a heart.

The film opens with a montage set to a narrative by Jake Sully (Worthington). He fills us in on what his life has been like in the wake of the events of the first film. He and Neytiri (Saldana) now have a family. The montage takes us quickly through those years as children are born and Pandora heals from the war with the Earth folks. We’re treated to what has become an idyllic life. That is until ships return from Earth. I won’t go into any real details of the plot. I think that’s best left for your own personal discovery, plus I’m not sure that Cameron might not show up at my door if I did. I will tell you that the story focuses on our new family and that the conflict of the film will feel more personal and intimate. And it’s this focus on specific characters and their motivations that makes this film far superior to the original. You will truly get to know these characters, and you will care about what happens to them. It’s the secret ingredient that was left out of the first film.

The film returns Sam Worthington and Zoe Saldana in the prominent roles of Jake and Neytiri. We also get a return by Stephen Lang and Sigourney Weaver. One of them in a pretty much cameo appearance, while the other is a big part of the film’s narrative. I know there’s been tons of speculation about how they could return, as both characters died in the first film. The returns are well done, and I don’t think you’ll have any issue with that part of the story. I’ve heard quite a bit of rumbling and complaining about their returns, but only from folks who haven’t yet seen the film.

The film is long at over three hours. I felt that there could have been some cuts here or there to tighten up the pace. The pace of the film is its one big flaw. Cameron has built an incredible world here, and he takes sometimes a little too much time lingering on these marvels. He’s showing off, and why not? I’ll answer that for you. Because it’s a long time to sit and just marvel. He’s Robert Wise in Star Trek: The Motion Picture spending far too much time admiring ships in space. For this film James Cameron has returned to his favorite medium … the water, and so expect to be thrilled and sometimes lulled to sleep by the presence of so many water species and interesting seascapes. There are scenes generated just to provide a gut-wrenching hammer of emotion, and I’m OK with that. I just think he goes too far.

There is no question Cameron remains a master at filmmaking and filmmaking technology. He plays around with the frame rate throughout, and I found that distracting, because the changes are painfully obvious.

Cameron has pretty much already shot the third film while making this one. It’s scheduled to be released in 2024. The two-year gap is necessary. I’m sure there are still tons of post-production things to deal with, and they’re going to milk this one for as long as they can. There’s the box office release. Then there’s streaming and home video. With UHD/4K, there’s a better chance of bringing the full impact of these films into our homes now. It’ll take a year or so to drain those resources. With a third film partially completed and a planned fourth, we are going to be seeing a lot of Avatar over the next decade. Of course, much of this depends on the box office here, but I wouldn’t worry too much about that. Avatar: The Way Of Water is going to be printing a ton of money. You might as well just resign yourself to the fact that you’re going to want to see this in the theaters. Don’t even think about watching this thing on that 3-inch phone screen. Yes, I’m talking to you. “I see you.”

Gino Sassani is a member of the Southeastern Film Critic's Association (SEFCA). He is a film and television critic based in Tampa, Florida. He's also the Senior Editor here at Upcomingdiscs. Gino started reviewing films in the early 1990's as a segment of his local television show Focus. He's an award-winning recording artist for Omega Records. Gino is currently working on his 8th album Merchants & Mercenaries. Gino took over Upcomingdiscs Dec 1, 2008. He works out of a home theater he calls The Reel World. Favorite films: The Godfather, The Godfather Part II, The Body Snatcher (Val Lewton film with Karloff and Lugosi, not the pod people film), Unforgiven, Gladiator, The Lion King, Jaws, Son Of Frankenstein, The Good, The Bad And The Ugly, and Monsters, Inc.
Coraline (UHD Blu-Ray) (4k) Fancy Pants (Blu-ray)