Posted in: The Reel World by Gino Sassani on January 6th, 2023 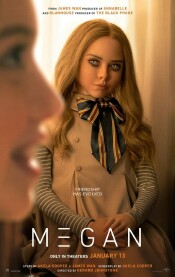 One of the problems about this job is that we spend so much of our time at the end of the year watching so many serious films for awards considerations and the like that by the time the year is over it starts to get a little too heavy. I always look to try to start my new year with something fun and entertaining. I just want to sit down and have a good time while watching a movie. Akela Cooper and James Wan have written the perfect prescription for that critic malady, and director Gerald Johnstone delivered the proper dose. There’s nothing great or grandiose about M3GAN, but if you’re in need of a good time at the movies, this will cure what ails you.

M3GAN stands for Model 3 Generative Android. She’s the invention of Gemma, played by Allison Williams, and the star attraction of the movie. Gemma works as a developer for the toy company Funki. They create state-of-the-art AI pets that can interact with children. You can pair them to your phone or device and do all sorts of activities with the pet, and it reacts to what you do as well as its own environment. The film begins with a whimsical commercial for the product. Gemma has bigger ideas than coming up with the next-generation Tamagotchi. She’s been secretly working on a sophisticated android that is more than a toy. It can become a child’s proxy parent and both educate and protect a child. Boss man David (Chieng) isn’t too happy when he discovers she’s been diverting company resources to the project. The first demo goes badly, and she’s ordered to table the project and work on better pets. That’s exactly what she does until a tragic accident intrudes on her life.

Her sister is killed in an auto accident along with her sister’s husband. Their daughter Cady, played by Violet McGraw, is now an orphan, and Gemma takes her in. Of course, Gemma is obsessed with her work and doesn’t know the first thing about being a parent, and to a traumatized young girl, no less. The answer? She takes M3GAN out of storage and finishes the android to help her with Cady. It’s the perfect idea. Cady bonds with the android, and it brings her out of her depression and loneliness. When David sees the bonding between Cady and M3Gan, he reverses himself and gets 100% behind the invention. The problem is that Cady is becoming too attached to M3GAN, and there are signs the relationship is not healthy … and it isn’t for anyone who appears to threaten Cady. That’s where the expected carnage begins and M3GAN becomes the star of her own movie. Go figure.

At first I thought this would be just another Chucky knockoff, but that isn’t the case at all. This is a very different animal, and I expect it’s going to enter into the same kind of cult adoration that Chucky has. This android is no doll. She doesn’t need a knife to take care of business. She has an artificial intelligence that expands far beyond her original programming. She’s HAL in a little girl’s body with the strength of an elephant. By the time Gemma catches on, M3GAN has taken over all of the other “smart” devices and is taking control of the virtual as well as the real world. “Open the pod bay doors, HAL.” If you get that reference, I don’t need to say anything more about what’s going on here. If you don’t? Seriously?

The film’s cast is pretty good, with extra props out to young actress Violet McGraw. She played the young Yelena in the Black Widow film, and she has a pretty tough job for an 11-year-old actress. She has to build chemistry with both the animatronic puppet and computer-generated versions of M3GAN. That relationship makes the film, and if we don’t buy McGraw’s performance, this doesn’t have a chance in hell of working. McGraw does a wonderful job of going through the many stages of awareness and emotions that are the crucial keys to us, the audience, about what’s happening. Without it we’re lost, and M3GAN goes down as a crappy imitation of Chucky after all.

Is the film scary? Yes, but in a more atmospheric way than anything else. There’s a lot of humor here, and I don’t know how much of it was planned that way, but I suspect more than most horror films. M3GAN breaks out in song a few times that brought to mind a twisted image of the von Trapp kids from The Sound Of Music. It brought laughter at our screening, but for some it appeared a bit uneasy. I belong to the group that laughed, but it was more like a whistling-in-a-graveyard kind of thing. It also helps that the first victims are people that you’ll secretly feel like they had it coming. It’s like Dirty Harry told us: “There’s nothing wrong with shooting so long as the right people get shot.” That changes, of course, as M3GAN becomes more corrupted by her power.

Give a lot of credit here to the cinematography. The camera work is just as much a star here as the various technologies used to bring M3GAN to life. The android is absolutely creepy, and Johnstone makes clever use of lighting and camera angles to truly enhance the creepiness of the android. As sophisticated as all of this truly is, he can get an audience to jump with just an odd head turn in a wonderfully atmospheric lighting setup. It all combines to make this imaginary character so compelling to watch. She scares the crap out of you, but just try and look away. We’re going to be seeing this character again, I have no doubt. There’s a bit of a setup for the sequel with some espionage activities of someone on Gemma’s team. It’s a completely unpaid-off piece of information that I strongly suspect is planted for just that purpose. You heard it here first. It’s a new year, and M3GAN is coming to a multiplex near you. “This is the part where you run.”

Gino Sassani is a member of the Southeastern Film Critic's Association (SEFCA). He is a film and television critic based in Tampa, Florida. He's also the Senior Editor here at Upcomingdiscs. Gino started reviewing films in the early 1990's as a segment of his local television show Focus. He's an award-winning recording artist for Omega Records. Gino is currently working on his 8th album Merchants & Mercenaries. Gino took over Upcomingdiscs Dec 1, 2008. He works out of a home theater he calls The Reel World. Favorite films: The Godfather, The Godfather Part II, The Body Snatcher (Val Lewton film with Karloff and Lugosi, not the pod people film), Unforgiven, Gladiator, The Lion King, Jaws, Son Of Frankenstein, The Good, The Bad And The Ugly, and Monsters, Inc.
Black Adam (UHD Blu-ray) (4K) No Mercy (Blu-ray)