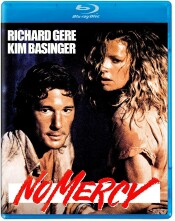 The 1980’s saw a resurgence of the themes and styles of the earlier film noir genre but with more modern themes and situations. Films like Alan Parker’s DeNiro/ Rourke Angel Heart and Paul Schrader’s Richard Gere/Laura Hutton American Gigolo are two of the finest examples of what has become known as neo noir. The genre has existed since the 1960’s, but there was a certain style to these 1980’s films that brought us the peak of this style of filmmaking. It crossed other genres as well. Ridley Scott’s Bladerunner is absolutely the best science fiction representative of the style, and that film’s impact on sci-fi going forward still has a huge impact today. It’s all about style: lighting, cinematography, and themes that often blur the line between good and bad. No Mercy returned Richard Gere to the genre, and while No Mercy was a box office flop, it has endured more than some from the era, and now Kino Lorber gives us a chance to revisit one of the better examples of neo noir on Blu-ray. It’s worth a look, and I’m going to tell you why.

Richard Gere plays Chicago detective Eddie Jillette. He and his partner Joey Collins (Basaraba) have been undercover at a car wash for several days. They are getting inpatient for a good bust and end up rushing into an arrest that nets them a simple pot dealer. They cause a lot of damage making the pop, and the result is more than a little disappointing to the brass. Things appear to turn around when the perp claims to have been contacted about doing a hit. He has a meeting that night, and so Eddie decides to leave the brass out of the picture and stand in for the hitman, who hasn’t met the contact yet. He shows up at the meet where he’s confronted by Allan Deveneux, played by William Atherton, and his “girl” Michel Duval, played by Kim Basinger. Eddie decides to act like a tough guy, and it all ends up with more mayhem and his partner getting killed. Now he wants to go to New Orleans where the hit was supposed to take place and track down the people who killed his partner.

Of course, it’s Michel he finds, and the two have an almost instant chemistry that literally carries the rest of the film that finds them on the run from a big bad guy, and the intended target of the hit, Losado, played by Jeroen Krabbe. Michel had been sold to him as a young girl, and she’s been basically his slave. On the run, they end up in the swamps handcuffed to each other. It was a security precaution by Eddie to make sure she didn’t get away, but now there swimming with the gators sans a handcuff key. The film’s climax features one of the decade’s best fight scenes. Eddie has set up a trap for Losado in a hotel, and the kingpin doesn’t come alone. It’s an ambush that backfires and leads to plenty of shooting and a climactic fight between Eddie and Losado while the hotel is burning to the ground around them.

The best thing about the film is the chemistry between Gere and Basinger, and there’s a reason why it’s so good. Their relationship on the film almost broke up Basinger’s marriage when her husband caught her making out with Gere. He was following her after discovering love letters between the two actors. It made all the papers and tabloids and led to the expectation of a lot of heat. The truth is their chemistry works much better in the swamps than it does in the bedroom. And if you came for the heat, you really get it in the burning hotel climax of the film. The couple would reunite in 1992 for Final Analysis.

Director Richard Pearce would not go on to have a great career. He ended up mostly in television doing one-offs for shows like Homicide: Life On The Streets and the CSI and Law & Order franchises. But composer Alan Silvestri would follow a different path. While this was not his best score by a long shot, leaning too much toward the 80’s synth sounds, he went on to compose scores for the Back To The Future trilogy along with Predator, Night At The Museum, The Avengers, and The Polar Express.

No Mercy is worth a look for its style and performances. The plot’s not original, but that was never the point with the original film noir movies. It was all about atmosphere and characters, and this one has both in surplus.

While there’s no detailed restoration here, the film does look pretty good and retains the grain that is so much a part of that atmosphere. Too much DNR can kill good atmosphere. “Yeah, that’s what happens.”

Gino Sassani is a member of the Southeastern Film Critic's Association (SEFCA). He is a film and television critic based in Tampa, Florida. He's also the Senior Editor here at Upcomingdiscs. Gino started reviewing films in the early 1990's as a segment of his local television show Focus. He's an award-winning recording artist for Omega Records. Gino is currently working on his 8th album Merchants & Mercenaries. Gino took over Upcomingdiscs Dec 1, 2008. He works out of a home theater he calls The Reel World. Favorite films: The Godfather, The Godfather Part II, The Body Snatcher (Val Lewton film with Karloff and Lugosi, not the pod people film), Unforgiven, Gladiator, The Lion King, Jaws, Son Of Frankenstein, The Good, The Bad And The Ugly, and Monsters, Inc.
M3GAN Death Wish (1974) (UHD Blu-ray) (4K)