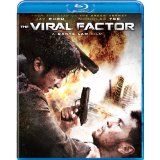 The Blu-ray case for The Viral Factor — an impressive, preposterous Hong Kong action offering available Aug. 28 — proudly boasts that the film comes “From the star of The Green Hornet“, possibly marking the first and last time anyone has bragged about their involvement with The Green Hornet. (Don’t look at me: I’m one of the few people who really enjoyed it.) Nevertheless, you shouldn’t shy away from this one just because it may somewhat be selling itself short. END_OF_DOCUMENT_TOKEN_TO_BE_REPLACED

Posted in Disc Reviews by Gino Sassani on November 18th, 2011

Erle Stanley Gardner wrote crime fiction, and while many of his 100 or so works are unknown to most of us, he created a character that has become as identified with criminal lawyers as any other in fiction. It was in these crime novels that Perry Mason first faced a courtroom. He developed a style where he would investigate these terrible crimes his clients were on trial for. He would find the real killer, and in what has become a Hollywood cliché, reveal his findings in a crucial moment during the trial. While we may not remember the novels, we all remember the man in the persona of Raymond Burr.  END_OF_DOCUMENT_TOKEN_TO_BE_REPLACED

Posted in Disc Reviews by Michael Durr on October 11th, 2011

The more I get into this review writing gig (I say this like I just started writing movie reviews last week when it’s been half a dozen years), the more I appreciate foreign films. I am no longer afraid of subtitles, culturally sensitive sub-plots, or the use of specific foreign mythological creatures as supporting characters. I am not even sure what I just said. Anyway, we have an interesting foreign film to review today entitled “Sin Yan” or more commonly known by the American title as Stool Pigeon. END_OF_DOCUMENT_TOKEN_TO_BE_REPLACED

Posted in Disc Reviews by Michael Durr on April 23rd, 2011

There are usually two schools of thought when it comes to judging sequels. One tends to be very harsh on the proceedings expecting it to surpass the original (which it hardly ever does) in all aspects of film-making. The other still expects a good film but realizes that this sort of thing is usually financially driven and just hopes for something that can favorable stand against the original. I happen to be in the later crowd. But, I certainly found myself inching towards the former when I received the blu-ray package to review Ip Man 2, Legend of the Grandmaster. Let’s go inside, shall we? END_OF_DOCUMENT_TOKEN_TO_BE_REPLACED

Posted in Disc Reviews by David Annandale on May 9th, 2010

Having accidentally blinded a singer during a contract killing, hit man extraordinaire Chow Yun-Fat, consumed with guilt, becomes the woman’s protector, and seeks redemption by finding some way to restore her sight. Meanwhile, Danny Lee is the plays-by-his-own-rules cop on his trail, and inevitably the two men will find themselves as unlikely allies in gigantically operatic gunfights. END_OF_DOCUMENT_TOKEN_TO_BE_REPLACED

Posted in Disc Reviews by Gino Sassani on January 16th, 2009

Supercop is really just the American title for the third entry in Jackie Chan’s very popular Police Story series in Hong Kong. For the first time in the franchise, Chan decided to go with an outside director, and he made a wise choice with newcomer Stanley Tong. Tong might have been a green director, but he had a natural feel for the abilities and strengths of his mega-star. The two would go on to collaborate on several more films after this rather remarkable first time pairing. END_OF_DOCUMENT_TOKEN_TO_BE_REPLACED

Posted in Disc Reviews by Archive Authors on December 29th, 2008

Visits – “an anthology of bone-chilling horror”? Well, it has its moments, I will say that. The most effective scenes are the ones that don’t call attention to the scare elements. Scenes that involve one or two little things out of the ordinary that don’t smack you in the face, but actually force a double-take in considering what it was you just saw END_OF_DOCUMENT_TOKEN_TO_BE_REPLACED

Posted in Disc Reviews by David Annandale on June 4th, 2008

The Pang brothers return with one more instalment to their series of ghost tales. This one also goes under the title of The Eye 10 (and The Eye: Infinity), which is actually the more accurate nomenclature, given the sheer number of hauntings that are present here. A group of friends on vacation in Thailand regale each other with ghost stories. Their host then produces a book that lists the ten ways of seeing ghosts. The group, whose instinct for self-preservation could do with some strengthening, proceed to put the book to the test. They get far more than they bargained for. END_OF_DOCUMENT_TOKEN_TO_BE_REPLACED

Posted in Disc Reviews by Michael Durr on April 30th, 2008

A question to ponder before we head into this review. What do you get when you mix anime or japanese animation with a healthy dose of John Woo? Besides a ton of falling gun shell casing and cute characters performing acrobatics in the air while taking down a dozen bad guys? You get a movie that goes full speed for over a hundred minutes and makes you realize that this is truly the perfect avenue for John Woo and style of films. However, just don’t expect there to be a completely solid story behind it. END_OF_DOCUMENT_TOKEN_TO_BE_REPLACED